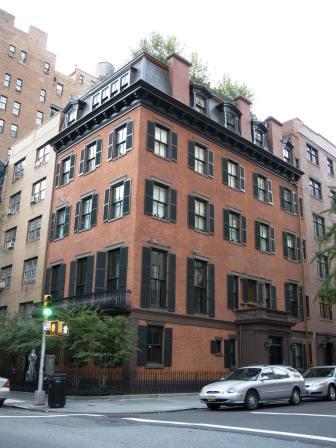 Samuel Ruggles’ grand scheme to create Gramercy Park, a refined residential square, was well underway by 1845. A year earlier landscaping had begun in the elegantly-fenced park and the city’s elite had begun erecting dignified residences on the 60 plots around the square.

At 86 Irving Place, at the corner of Gramercy Park South, Whig politician William Samuel Johnson erected his comfortable four-story home in 1845. Five years later he sold it to socially prominent paper merchant Horace Brooks and his wife Mary Brooks. It was here in 1855 that the funeral of their 2 year old son, Horace Jr., was held.

In 1866 Brooks updated the house with a fashionable black slate mansard roof with ornate iron cresting. The addition gave the restrained structure a dignified, Victorian flavor. A matching, mansarded stable was built to the south.

Shortly thereafter it was owned by the eminent tobacco merchant Joseph Fatman who died in the house on October 11, 1869.

The large home had become a high-class rooming house by 1887 when Stuyvesant Fish purchased it. Fish, the president of the Illinois Central Railroad, was the son of former governor Hamilton Fish and a descendant of Peter Stuyvesant. His wife Marion (called Mamie by her friends) immediately began renovations. Her first priority was to change the address to the more socially-accepted 19 Gramercy Park South, despite the fact that the entrance was squarely on Irving Place.

Although popular legend holds that Stanford White redesigned the home, documentation points more accurately to architect Sidney V. Stratton, a favorite of New York society at the time. Whichever designer was responsible, the results were spectacular. A curving marble staircase rose from the reception area to the upper floors. Here were classical elements, painted paneling and columns. On the top floor Mrs. Stuyvesant Fish installed her ballroom, where the cream of New York society would be lavishly entertained. The renovations cost a staggering $120,000.

In 1898 the Fishes commissioned Stanford White to design a magnificent Italian palazzo at 78th Street and Madison Avenue, as they participated in the migration of millionaires northward. They retained the Gramercy Park home, leasing it to well-to-do merchant class families.

In 1901 Mr. and Mrs. Sharles rented it and on May 9, 1902 The New York Times reported that Mr. and Mrs. Philip Lydig “have taken the old Stuyvesant Fish house…for next Winter. They are to return shortly from Paris.” The newspaper amended the account the following September when the Lydigs sub-leased the home to Mr. and Mrs. Robert Collier, the Lydigs “have taken another house up town.” The Gramercy Park house, said The Times, “is not very old, and it was entirely done over by Mrs. Stuyvesant Fish in 1888.”

On January 25, 1903, in honor of Mrs. Collier's grandmother, Mrs. Astor, the Colliers gave “their first large entertainment in the residence that belonged formerly to Stuyvesant Fish…It is to be a dinner, followed by a musicale, a very popular form just now of entertaining,” reported The New York Times.


In 1909 an apartment building was added to the southern end where the stable had stood. The resulting complex was managed as a multiple – albeit high-end – dwelling. Over the years residents included portrait artist Cecilia Beaux, actor John Barrymore, David Lamar, the "Wolf of Wall Street," Edward Sheldon, the playwright, and William C Bullitt, ambassador to France in 1939 and, in 1944, Norman Thomas, the Socialist Party candidate for President.

High-profile publicist Benjamin Sonnenberg and his wife leased two full floors in 1931, quickly falling in love with the house. In 1945 the couple purchased the building from Stuyvesant Fish’s son for $85,000, moved into the Waldorf-Astoria, and quickly re-converted it to a private residence, joining the original house with the apartment building.

The Sonnenberg’s furnished the resulting 37-room mansion with English antiques and paintings by Renoir, Seurat, Gauguin, Goya, Tintoretto and Cezanne. Seventeenth Century English paneling from Streatlam Castle in England was installed in a second story drawing room, which became known as The William & Mary Room. There were 13 fireplaces, six bedroom suites and, of course, Mamie Fish’s dramatic ballroom.

With the arrival of the Sonnenbergs, the house again saw lavish entertainment on par with that of Mrs. Stuyvesant Fish with 150 guests for dinner. According to one friend, Sonnenberg “always thought the ideal dinner party should have one actress, one businessman, one artist, and one banker.” The guest list of a 1967 dinner party included Brooke Astor, Bob Dylan, Jacob Javits, Jackie Kennedy, Alistair Cooke, Tom Wolfe, Truman Capote and Ethel Kennedy.

On September 5, 1978 Benjamin Sonnenberg suffered a heart attack. A day later he was dead. The house was opened for a day in June for prospective buyers to survey the publicist’s collections, then the house was emptied by Sotheby Parke Bernet and put on sale for $1.9 million

The house was purchased for $1.5 cash by Baron Walter Langer von Langendorff, the creator of White Shoulders perfume. Peculiarly, the baron and his wife staffed the house but did not move in. For years it sat, essentially empty, the private residence of servants.

Finally in 1981 the baron entreated Jane Ashley to take up residence and start redecorating. Two years later, however, the owner of 19 Gramercy Park South died, leaving an estate of approximately $125 million. Jane Ashley continued to live in the house another seven years before it was put on the market for $10 million.

The house, which critic Brendan Gill had once called “the greatest private house remaining in private hands in New York,” was simply too large. Entertainment on the scale of the Fishes and the Sonnenbergs no longer existed. In 1995 the property was sold to fashion designer Richard Tyler and his wife, Lisa Trafficante, for $3.5 million. Mrs. Stuyvesant Fish’s glorious ballroom was renovated into a “white space” for fashion shows. 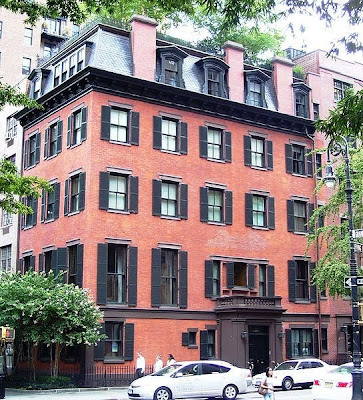 By January 2000 the 18,000 square foot home was on the market again, selling in December for $16.5 million to psychologist Dr. Henry Jarecki.  No. 19 Gramercy Park has one of the most varied and colorful histories of New York residences; a dignified reminder of the Park’s rich heritage.
Posted by Tom Miller at 2:35 AM