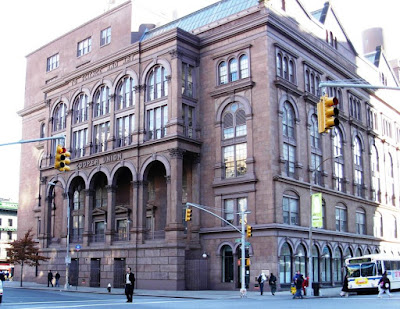 Nine-year old Peter Cooper, in 1800, had already learned the basics of several trades – beer brewing, hat making, and carpentry. What he had not learned was correct spelling and formal arithmetic. The son of a working man, he had only one year of schooling. While Cooper had no formal education, he would go on to greatness. Yet his lack of education would always haunt him.
That year the young Peter Cooper was working as an carriage-maker’s apprentice. He exhibited an amazing skill and innovativeness. To sharpen his innate talents the boy sought an accessible school where he could learn scientific techniques, geometry, and theory. There was no such institution.
Cooper would go on to design and build the first steam railroad engine in the country, open a glue factory and an iron foundry, invent powdered gelatin (which, when his wife added fruit for flavor became known as Jello) and increased his growing fortune through real estate, insurance, the new telegraph, and railroading.

By the middle of the 19th Century, Cooper was one of the most successful and wealthiest men in the country. Yet he suffered a nagging self-consciousness over his lack of education. To provide the means by which other lower-class children could receive an education, he conceived of a free teaching institution based on the concept of a polytechnic school in Paris.

Education should be, he said "as free as water and air." He set about planning a school for the "boys and girls of this city, who had no better opportunity than I."
The cornerstone for Cooper Union for the Advancement of Science and Art was laid in 1854. The total cost of purchasing the site and erecting the structure would cost Cooper, according to The New York Times, “$700,000 in gold.” 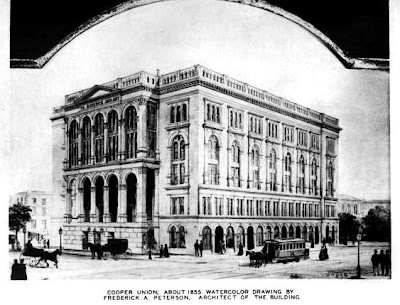 Designed by Frederick A. Peterson, the German neo-Romanesque structure was completed in 1859 and described by James B. McCabe, Jr. in 1882 as “a plain but massive and imposing edifice of brownstone, six stories high, with a large basement below the level of the streets.”
Cooper used his own innovations in the construction of the Union. He used rolled, wrought-iron beams from his foundry, arranged in a light grid, to support the floors. By utilizing thinner piers than the customary heavy stone arches, he increased the usable space of the lower levels, including the main hall.
Even before the building was completed the Great Hall was used for speeches, rallies and lectures. Rental from the public spaces was intended to contribute heavily to the operation of the school. The 900-seat space would soon see reformers and politicians like Henry Ward Beecher, William Cullen Bryant and William Lloyd Garrison thundering against slavery and defending the Union. Here, in 1860, Abraham Lincoln gave the powerful speech that is generally credited with earning him the nomination for the Presidency. 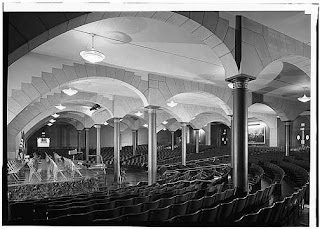 “The course instruction is very thorough,” said James McCabe, “the ablest teachers being employed, and the standard of scholarship is high. Searching and rigid examinations test the proficiency of the pupils, and the graduates are sent forth into the world thoroughly prepared in the branches taught here.”
Among the relatively early graduates of the art school were Augustus Saint-Gaudens, Adolph A. Weinman and Leo Friedlander; Thomas Edison and Supreme Court Justice Felix Frankfurter were students.
Cooper included a free library in his building so that the general public, not only the students, could have access to information and learning. In a letter to his Trustees, he wrote “I desire to make this institution contribute in every way to aid the efforts of youth to acquire useful knowledge, and to find and fill that place in the community, where their capacity and talents can be usefully employed, with the greatest possible advantage to themselves and the community in which they live.”
In 1882 the library contained over 15,000 volumes; by 1932 the number had grown to 67,000 with another 17,000 in the more recent art library.
Operating costs went far beyond teacher salaries and books. In the 1868 report, maintenance costs included “14,000 gas-burners in the building, and when they are all lighted the consumption of gas is very great. A large number of engravings have been framed and hung upon all the walls in the Institute. Additions have been made to the furniture of the upper schoolrooms. Speaking-tubes have been placed throughout the building. A hose has been placed on each floor for the purpose of suppressing any conflagration that might break out on the floors, though the building is fire-proof. A catalogue of the library is now printing for the first time.” 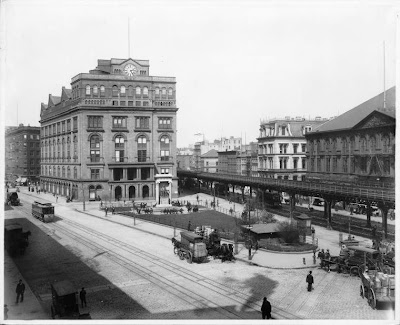 To cover the expenses, in addition to Cooper’s endowment and the rentals of the public spaces, donations flowed in from other wealthy New Yorkers such as Andrew Carnegie and Abram Hewitt.
When Peter Cooper died in on April 12, 1883, he left $100,000 to the operation of Cooper Union. His legacy never faltered with his passing.
On February 3, 1902 a letter to the Editor of The New York Times expressed the gratitude of a graduate. “Fairly prosperous now, I am glad to acknowledge my indebtedness to the Cooper Union. Twenty-seven years ago, when a young man, alone in New York, without the restraints of home and without a relative within a thousand miles of me, for two Winters I attended evening drawing classes at Cooper Union and am glad to say with thousands of other New Yorkers, ‘God Bless Peter Cooper. Keep his memory green.’”
By the 1920s the once grand residential area around the Cooper Union had grown seedy. Yet the Union and its programs remained proud. The New York Times, on December 5, 1920, wrote “Those who are accustomed to regard the Bowery as a street given over to tramps, gunmen and sensation seekers could study with some advantage the current activities of Cooper Union, the Bowery’s educational centre, splendid monument as it is to the foresight and liberality of a poor New York boy who when he had grown rich, did not forget his early struggles, and sympathized with the hoes and ambitions of those who were traveling the same long, hard, broken road to an independent competence.”
Over the years Presidents Grant, Cleveland, Taft, Theodore Roosevelt, Wilson, Clinton and Obama would follow Lincoln’s lead, speaking in the Great Hall. Here the NAACP and the Red Cross were organized.


Over a century and a half after Peter Cooper acted on his dream, the Cooper Union for the Advancement of Science and Art continues to provide full tuition for every student.
Posted by Tom Miller at 2:53 AM