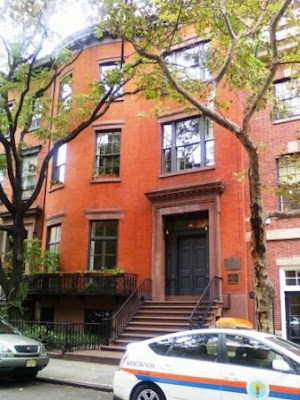 The farmland that John Cowman had purchased in 1825 was, by the time his will was executed in 1842, still undeveloped and rural; although Fifth and Sixth Avenues had been newly extended through the area. Cowman’s widowed son-in-law, Edward Sebring Mesier received half of the property.

Mesier, a partner in the firm Mesier & Rich, book publishers and stationery merchants, came from a long line of New York retailers extending back to the 18th Century. Edward Mesier’s inherited land was divided into lots on the north side of West 16th Street – Nos. 1 through 21.

In 1845 Mesier began talks with several prospective property owners and a restrictive agreement was recorded. Accordingly, buildings erected on the lots were to be “at least six feet back from the street” and no “stable, meat shop, slaughter house…or any base commercial establishment” would be permitted. The block was to be one of “first-class” homes. 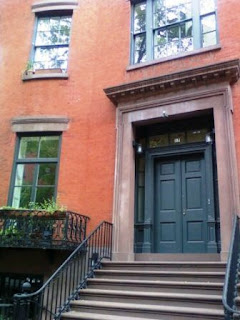 George S. Fox purchased No. 17 in April of the next year.  The row of Greek Revival residences that included No. 17 were three stories high above a brownstone English basement. Brownstone trims, including the door surround, window sills and lintels, and the broad entrance steps, contrasted handsomely with the red brick. An elegant cast iron balcony hugged the parlor level. The curved bowfront of No. 17, along with those of its neighbors Nos. 21 and 23, was a popular and common architectural touch in cities like Boston, but extremely rare in New York.

The entrance was slightly recessed, with a paneled double-door with sidelights and overlight. Inside, the finest furniture from the workshops of mid-century New York cabinetmakers adorned the parlor, dining room and bedrooms.

In 1876, wealthy merchant William B. Rice and his wife Gertrude Stevens Rice purchased the home. The Rices were active in New York social circles and spent their summers at their Bar Harbor, Maine estate, The Tides. In November of 1888 Mrs. Rice was appointed Commissioner of Common Schools by Mayor Hewitt. 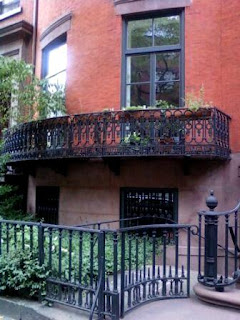 After William Rice died in 1899, Gertrude Rice secluded herself at No. 17 West 16th Street for a year, renting The Tides out to A. Butler Duncan for the summer of 1900. She thereafter devoted herself to charitable works, most specifically the State Charities Aid Association, when not spending her summer months in Maine.
In the meantime, Margaret Higgins Sanger was a nurse in Manhattan’s impoverished Lower East Side. Sanger was horrified by the infant mortality rate she witnessed and in 1912 abandoned her career to advocate for birth control. She wrote and published a series of articles on sexually-transmitted diseases and contraception.

The articles were considered obscene by the United States Government and were, therefore, illegal to mail under the restraints of the Comstock Act. Margaret Sanger fled the country to avoid prosecution in 1914.

The uproar from women’s groups made the Sanger case an embarrassment for the government. All charges were eventually dropped and in 1915 she returned to New York to continue her campaign. In 1923 she opened the first physician-staffed clinic in the country for “the medically supervised study of contraceptive techniques.”

Seven years later the clinic had outgrown its space and Margaret Sanger’s husband, oil industrialist J. Noah H. Slee, purchased the house at 17 West 16th Street for the clinic's use. The Birth Control Clinical Research Bureau moved into the house in 1930, expanding its services. Doctors nationwide came to the clinic to learn the latest contraceptive techniques (few medical colleges taught birth control) and social workers kept in contact with the women who sought assistance.


Within a few years the Bureau was serving over 10,000 patients a year, providing contraceptive instruction for couples and married women, and gynecological services.
Margaret Sanger died in 1966, however the Bureau continued to work out of the house until 1973.
Although the National Park Service recommended national landmark designation, the nomination was held up by the first Bush Administration which felt that Sanger’s involvement in birth control would be equated with the abortion movement. The nomination sat, unsigned, on the desk of the Secretary of the Interior for years.
Upon Bill Clinton’s election, Secretary of the Interior Bruce Babbitt signed the forms and in 1993 the Sanger Clinic was designed a National Historic Landmark.
Today No. 17 West 16th Street is privately owned and beautifully restored.
Posted by Tom Miller at 2:07 AM