The during last years of the 19th Century gentlemen’s clubs dotted New York. These comfortable escapes from business (and home) gave gentlemen an outlet in which share common interests such as yachting, tennis and racquets, shared college ties, or collecting. One such club was the Grolier.

On the cold evening of January 23, 1884 eight gentlemen arrived at 11 East 36th Street, the residence of Robert Hoe. Hoe owned the world’s largest printing press manufacturing company. That night the assemblage of highly-educated men formed the Grolier Club, named after Jean Grolier de Servieres, a 16th Century French book collector. Each of the members was a connoisseur of “book arts.” Each felt that the arts of printing and typography in America were in serious decline.

Although the membership included men from other professions – bankers and lawyers, for instance – most were publishers and printers. Whitelaw Reid was the editor of The New York Tribune, William Laffan published The New York Sun, Theodore De Vinne of De Vinne Press on Lafayette Street was perhaps the foremost printer in the country. Other members were involved in major publishing houses such as Schribner, Harper, and Appleton.

Six years later the club had grown and a permanent clubhouse was necessary. Included in the club’s Constitution was the requirement of “…maintenance of a Club building for the safekeeping of its property, and otherwise suitable for the purposes of the club.” 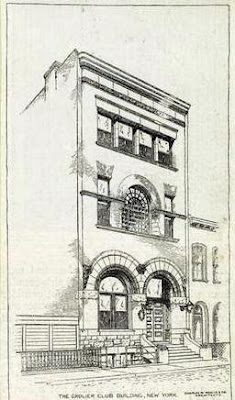 Architect Charles W. Romeyn designed a unique Romanesque Revival house at 29 East 32nd Street built of tan Roman brick and contrasting red sandstone. Bold stone arches defined the first floor ornamented by carved stone with Celtic-type basketweave designs. The second floor was dominated by a great arched window, mirroring the shape of the arches directly below, while on the third floor a wide run of four side-by-side windows allowed sunlight to pour in.

It was not an all-male refuge, however. Women, too, discussed their passion of books. On February 21, 1896 “Miss Louise Both-Hendriksen read a paper on ‘Book Plates’ in which she discussed ancient and modern plates, French and English principally, and gave the distinctions in style and the underlying reasons therefore. She also gave the names of the prominent book-plate artists of the present day,” reported The New York Times.

The same night Theodore De Vinne criticized modern printing methods. He complained that “in his younger days he had been taught that anything that was difficult, eccentric, or striking was fine printing, but that idea has now largely been outgrown.”

Monthly exhibitions were staged at the Club. On April 16, 1898 The Times reported that “For its April monthly exhibition the Grolier Club…has arranged a display of title pages and frontispieces of books published in the sixteen and seventeenth centuries. There are 271 numbers in the catalogue, which, as usual, has been compiled with great care.”

Despite its impressive building, encroaching commerce forced the Club to move on. On December 27, 1914 The New York Times reported “the Grolier Club is preparing to move to a site which will be less disturbed by the activities of trade than is its home in Thirty-second Street, near Madison Avenue. “

The newspaper said that when the clubhouse was built “Twelve-story business lofts in the choice Murray Hill district or on Fourth or Madison Avenues were not thought of at that time. Now, however, a twelve-story building on Madison Avenue corner of Thirty-second Street overtops the modest Grolier Club, and just to the east is another huge building of the same size. The Grolier Club with its bookish atmosphere, looks out of place, and this fact has led the members to vote to sell the house.”

The Times went on to describe the library of works on book making, paper, etching, printing, illustrating and binding, “what is said to be the largest and finest collection in the world, outside of the national libraries of France and England.” The collection at the time numbered about 12,000 volumes.

Although the newspaper predicted that the house would be razed, it survived. Converted to office space it served as the headquarters of women’s garment trade organizations then, in the 1930s became home to the Building Employees Union.

Actor and dancer Gilbert Kiamie purchased the old Grolier Club and used it as a private home in the 1940s, after which it reverted to office space again. 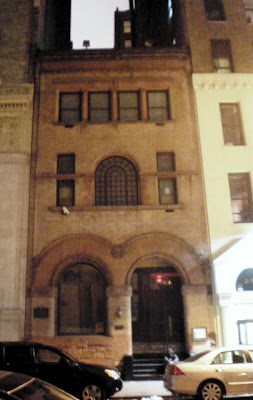 In 1990 the building became “The Grolier,” a members-only supper club, by Henri Kessler and Peter Kotite. The owners spent over $1 million on interior renovations. While most of the interior detailing had been stripped away during its use as office space, the Grolier retained its original fireplaces. The building was landmarked in 1970.
Posted by Tom Miller at 3:00 AM