Young Charles Tiffany opened his first tiny store opposite City Hall in 1837, in the middle of America’s first great depression. When he died 65 years later in 1902 leaving an estate of $35 million, his store had become the benchmark of the jewelry business in America and the name Tiffany & Company synonymous with quality.

Tiffany’s store had moved to Union Square in 1870. The new cast iron store was praised by The New York Times as “a Jewel Palace...the largest of its kind in the world. A school of taste...a teacher of art progress."

Charles Tiffany kept a staff of seven whose jobs were simply to keep files on the wealthy socialites across the country. Photographs, newspaper clippings and details of their financial position were kept at hand so that when moneyed patrons entered they were recognized, addressed by name and allowed to take their purchases without paying upfront.  According to Tiffany, “When we give credit to anyone who had supposed himself unknown to us we are sure to retain him forever.”

At the time of this death at 90, Tiffany was planning to move his store once again. Fifth Avenue was the center of wealth in New York and the Waldorf-Astoria Hotel between 33rd and 34th Streets was where the well-heeled went to be seen. Diagonally across the street, at 401 Fifth Avenue between 36th and 37th Streets, the new Tiffany store would rise.

Tiffany’s vision moved ahead and the board of directors commissioned McKim, Mead & White to design the new store; a building appropriate to its surroundings. The move in 1905, along with Benjamin Altman’s great white marble emporium next door that would open a year later, would signal the upward encroachment of commerce into the Fifth Avenue stronghold of brownstone mansions and marble chateaux.

What Stanford White produced was, as novelist Henry James called it “a great nobleness of white marble.” Drawing on the Sixteenth Century Venetian Palazzo Grimani, the architect designed one of the most beautiful buildings of his career. The completed structure cost $1 million.


According to Francis Morrone and James Iska in their The Architectural Guidebook to New York, “There is a phenomenal lightness to this building that is an almost perfect amalgam of the Beaux-Arts and the Modern; the Tiffany Building is a truly underappreciated work that makes one wonder what White might have produced had he not died so tragically young.”

Indeed, Edmund Vincent Gillon and Henry Hope Reed felt White outdid the original. In their Beaux-Arts Architecture in New York: A Photographic Guide, they said “In some ways, thanks to the proportions given it by White, the Tiffany Building is superior to the model.”

Through its doors came brigades of New York’s and the world’s elite. In the days when society women draped themselves in pearl ropes and weighed themselves down in diamonds, the robin's egg blue Tiffany & Co. box, introduced in 1847, had become a symbol of status.

With the Russian Revolution, which was quickly followed by World War I, times changed in Europe. As royal houses fell the exiled nobles sold off their jewels for desperately-needed cash. Many of these ended up in the vaults of Tiffany & Company. From their white marble palazzo, Tiffany customarily sold $6 million in diamonds each year. There were often over $40 million in jewels in the vault.

The one Tiffany & Company item no one seemed ready to purchase, however, was the Tiffany Diamond; the 128.5-carat gem still sits in the New York store, valued today at $22 million.

In 1940 Tiffany & Co. once again moved, this time uptown to Fifth Avenue and 57th Street. The move signaled a decline in what Morrone and Iska called “…maybe Fifth Avenue’s most beautiful building.”

While much of the upper building remained intact, the street level was brutalized. Pseudo-modern storefronts obliterated the Stanford White facade.  “The beholder is shocked by the vandalism inflicted on the lowest row of columns on the Fifth Avenue front,” lamented Gillon and Reed. 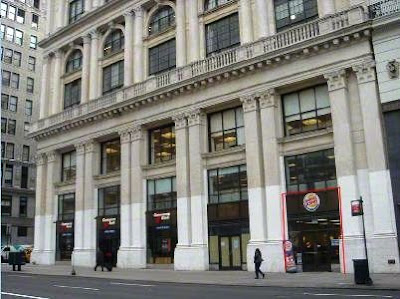 In 2003 an aggressive restoration brought back the three-story Corinthian columns that had been obliterated mid-century. Yet today, where Astors and Vanderbilts once shopped for silver ewers and diamond brooches, tourists in sneakers and shorts inhale Whoppers.  And the building that Gillon and Reed termed “underappreciated” is in fact mostly overlooked and ignored.
Posted by Tom Miller at 3:04 AM