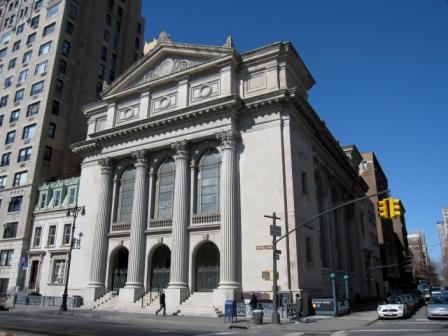 In 1654, with both the Spanish and Portuguese Inquisitions raging in Europe, a group of 23 Spanish and Portuguese Jews fled to America by way of Brazil, establishing themselves in lower Manhattan. For nearly a century they worshipped in rented spaces until, in 1730, they converted an obsolete gristmill into a synagogue, creating the first American synagogue.

As the congregation grew and the city expanded northward, so did Congregation Shearith Israel, moving three times to new houses of worship. By the time the 19th Century was drawing to a close, the congregation had grown large and wealthy. The members selected a site at the corner of Central Park West and 70th Street for their next shul, where impressive buildings had begun rising. There they purchased five lots, costing $140,000.

Arnold W. Brunner and Thomas Tryon were given the commission to design the new synagogue. Although fashion in Jewish religious architecture had tended to reflect Near Eastern styles – with onion domes and Moorish arches – the congregation wanted for something different.


Archeological excavations in Israel near the Sea of Galilee at the time had uncovered classical ruins of a Greco-Roman period synagogue. The discovery sparked interest in roots going further back than the Jews’ Moorish history. Arnold Brunner referred to it as the “sanction of antiquity.”


The architects produced a dramatic Roman temple, completed in 1897, with four gigantic Corinthian columns supporting a cornice and ambitious pediment. A grand flight of stone steps leads to the entrance. Congregation Shearith Israel had come a long way since 1654.

Tiffany Studios produced the soaring stained glass windows and the interior walls were clad in various types of marble. Two millstones from the colonial period gristmill synagogue on Mill Street were installed at the entrance and the reader’s desk sits on planks from that same synagogue. 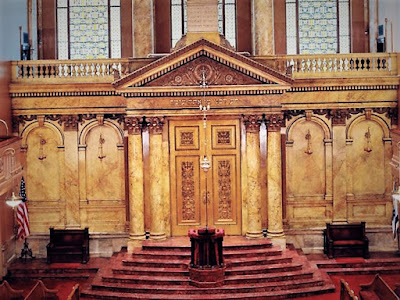 One room, called The Small Synagogue, is furnished in the Georgian style with some of the furniture original the 1730 Mill Street building.

Over a century later, Congregation Shearith Israel continues its venerable history in New York in its monumental classical synagogue.