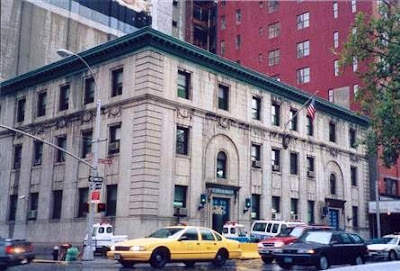 Nathaniel Bush held the enviable position of official architect to the New York Police Department for over three decades. From 1862 to 1895 he produced numerous station houses throughout the city. Not only was Bush an architect, but he was an NYPD sergeant, as well.


Bush retired because, as The New York Times reported on April 24, 1895, “age has unfitted him to perform his duties properly.” Tammany Hall jumped at the chance to give its own favored architects, Horgan & Slattery, the position. Not unexpectedly, building costs began climbing.

With the consolidation of the five boroughs in 1898 the New York Police Department quickly grew. Within the next few years plans were underway for a surge of station house construction. Requests poured in to the City Controller’s office to investigate the fees paid to Horgan & Slattery. In 1901 Controller Grout reported that $193,661.34 had been paid to the firm in that year alone.

The New York Times complained “For many years the Police Department economized many thousands of dollars through Nathaniel D. Bush, a detailed policeman, who was a competent architect, and none of whose plans for station houses resulted in disaster or loss to the city.”

As the building boom began, Hoppin & Koen were hired to design the magnificent Police Headquarters at 240 Centre Street, completed in 1909 – a domed Baroque palace. Three years later they were commissioned again to design the Fourth Precinct station house at 16 Ericsson Place.

The Fourth Precinct had been housed in an 1871 structure which was no longer adequate. Throughout the late 19th Century the precinct was home to numerous murders, assaults and other crimes. For its new station Hoppin & Koen designed an Italian Renaissance palace with a large stable on the southern end. 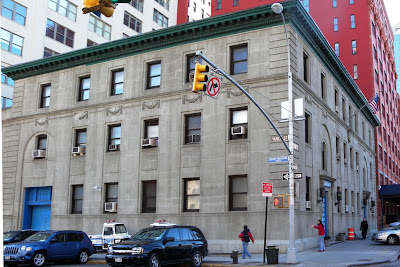 The AIA Guide to New York City called it “A limestone Renaissance Revival palazzetto whose public interior in no way reflects the opulence of the exterior – except for the stable on the Varick Street side. The paddocks and other equine accoutrements have a quality that exceeds that provided for the officers.”

The dignified formal precinct house features two two-story arched entrances, a modest bracketed cornice, and the Seal of the City of New York in relief below the stone third floor course. 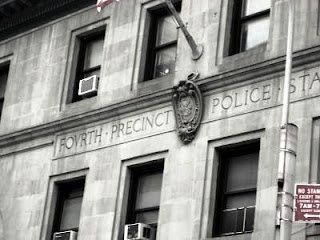 The exterior of the building is extraordinarily unchanged since 1912 and police horses still occupy the paddocks of the stables.
Posted by Tom Miller at 2:46 AM