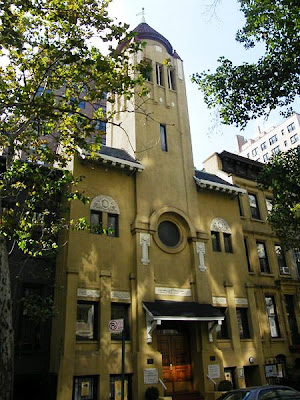 Not until after the unsuccessful Hungarian Revolution of 1848-1849 did the first Hungarians immigrate to New York City. This new addition to the city's diverse population heartily welcomed the revolutionary Louis Kossuth when he visited Manhattan in December of 1851 to rally financial and political support for his cause.

In the 1870’s, however, over 10,000 Hungarians had settled in Manhattan in, for the most part, two 2nd Avenue neighborhoods: between 1st and 10th Streets, and between 55th and 72nd Streets. New York historian Konrad Bercovici wrote “The houses of the Hungarian district in New York are more or less of the modern tenement type...It is within that the homes are different from the houses of the people of other nationalities...It is in the kitchens of these houses, spick and span, [that] one can notice the differences of national character. Love of good food, spicy and tasty, is one of the characteristics of the Hungarians."

Thousands more crushed into the Hungarian neighborhoods and by 1910 estimates of the population ranged from 76,625 to over 110,000.

As the Lower East Side became increasingly congested, more and more Hungarians migrated north to the Yorkville section of the city -- of which Random House's Depression era "New York City Guide" would write "The Hungarians, in the upper seventies, aid in giving Yorkville its Central European atmosphere.  The Hungarian daily, Amerikai Magyar Nepszava, is found on the newsstands in this vinicity; Tokay wine is featured in the liquor stores; and in the delicatessens are sold goose livers and the famed Hercz, Pick, and Drossy salamis from Budapest.  The Hungarian cuisine is noted for its variety and savory sauces; in this neighborhood, particularly on East Seventy-ninth Street between First and Second Avenues, are many restaurants whose specialities are chicken paprikas, rostbraten, and strudel."

In 1914 the congregation opted to build a new church on a plot purchased at 344 East 69th Street. Hungarian-born architect Emery Roth was commissioned to design the structure.

Roth would go on to design some of Manhattan’s most memorable Art Deco apartment buildings; however for The First Hungarian Reformed Church he drew his inspiration from his homeland. Combing traditional Hungarian styles with Vienna Secessionist touches he created an unpretentious but strikingly unique facade. Completed in 1916 at a cost of $22,000, the facade incorporates brick, tile, stucco, tile and limestone. Dramatically punching through the deeply overhanging eaves is an 80-foot bell tower. 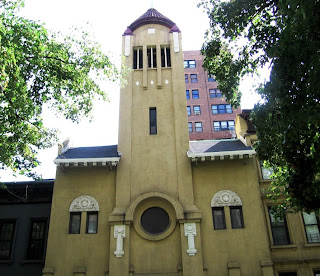 The First Hungarian Reformed Church, while quaint and charming, was home to no-nonsense worshippers with a decided purpose. Reverand Zoltan Kuthy, the pastor who dedicated the new structure, would go on to be one of the most active and influential figures in Hungarian-American Protestantism. A successor, Reverand Laszlo Gerenday, became pastor after having served with the French Foreign Legion; and later the Reverand Imre Kovacs would lead fervid demonstrations against the Communists, protesting Soviet control over Hungary and the loss of basic human rights in his homeland. On July 9, 1944 the congregation held a special service exclusively to protest the treatment of Jews in Germany.

At a rededication ceremony on December 31, 1930, Hungarian sculptor Janos Horvay presented the church with three bronze tablets that were originally to be installed in the Kossuth monument on Riverside Drive.

Although the population of the Yorkville neighborhood is no longer predominantly Hungarian, the services at the First Hungarian Reformed Church are still conducted solely in the native language. The building was listed on the National Register of Historic Places on August 31, 2000.
Posted by Tom Miller at 2:19 AM