"The Little Treehouse That Could" at No. 50 West 12th Street 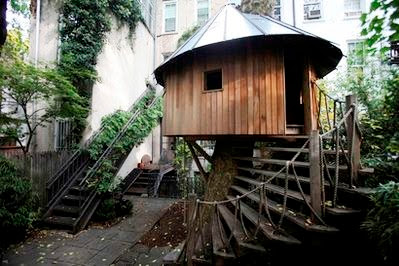 photo Associated Press
When the handsome brownstone-fronted house was built at 50 West 12th Street in the years prior to the Civil War, no one could have anticipated the attention it would draw.

Surely the neighbors on the quiet residential street were scandalized when the first owner, Robert N. Freeman, was arrested, “charged with retaining in his possession a number of gold watches belonging to Messrs. Middleton & Pooler, importers of watches, at No. 16 Maiden-Lane, and of Mr. George H. Barney, jeweler, in the same building, which had been entrusted to him to sell on commission.”

Then on January 15, 1905 resident Henry J. Smith was locked up and fined $3 the next morning at the Jefferson Market Court, charged with intoxication. Smith had accused three men and a woman of robbing him.

“I was robbed of $4 in a chop suey place, and there stand the people who did it,” he told Patrolman Steinmeyer of the West 13th Street Station. According to The New York Times, the three “of apparent respectability were pointed out by Smith, and all four were indignant when the policeman repeated the complaint and took them to the station.” The group had been to a dance in Harlem, had just exited the 42nd Street Subway station and were saying good-night when Smith identified them.

“Smith seemed to be overcome by something or other while the episode was being discussed, and the Sergeant decided that he was not in a condition to be on the streets alone, and ordered him locked up,” reported The Times.

By 1915 things settled down at No. 50 West 12th Street. Irving Simon, president of Levia Realty Company, purchased the house for $22,000 then spent another $8000 on renovations, including a large “skylight studio” on the fourth floor, “modern plumbing, electricity and steam heating. Rent for the house jumped from $1500 a year, furnished, to $3550.

That year the house began its tradition of housing artistic types with artist Adolf Lawson renting the first floor for $800 a year, and stage dancer August Duncan occupying the third and fourth floors at $1800 per year. The second floor with its 14-foot high ceilings was leased for $950.


Towards the end of the 20th Century No. 12, by now reconverted to a private residence, was owned by musician David Byrne of the Talking Heads. Around 2005 he sold the property to renowned artist Melinda Hackett.

And that’s when all the attention really started.

The new notoriety had nothing to do with stolen watches, or intoxication, or an historic townhouse in the Greenwich Village Historic District. It had to do with a treehouse.

Hackett wanted her three daughters, accustomed to the freedom of grassy North Salem, New York, to have their own private retreat. In the small backyard stood a venerable London Plane tree, just aching for a treehouse. 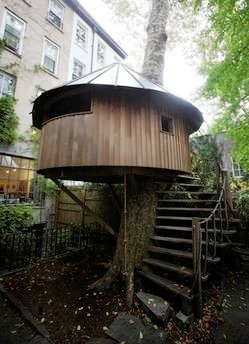 Photo Associated Press
The artist commissioned Nick Cohen and Ashley Koral – whom she already knew – to design and build the juvenile getaway. $5000 and about five months later the Hackett girls had a unique, circular treehouse with a winding staircase.

Architect Robert Strong told the Associated Press “It's a beautiful treehouse; it has a beautiful design. It's wonderful the way it encompasses the branches; it's completely rounded, flowing much like the tree."

Hackett’s neighbor did not agree.

An anonymous complaint charged Hackett with building “a structure in the rear which is nailed to a tree,” seemed unsafe, and was constructed with no posted permit.

It was the beginning of a months-long battle. The artist appeared before the court of the Environmental Control Board, filed retroactively for a building permit, fought three violations from the Department of Buildings, and pled her case before the New York City Landmark Preservation Commission (she had altered an historically-designated property).

In the Fall of 2010, much to the chagrin of the nameless neighbor – whom at least one journalist termed “grumpy” – Melinda Hackett’s treehouse was granted a stay of execution by the Landmarks Commission.

Although the legal battle cost Hackett about as much as she spent to construct the treehouse, her daughters still have their private place where “They plot. They scheme. They gossip,” as their mother put it. 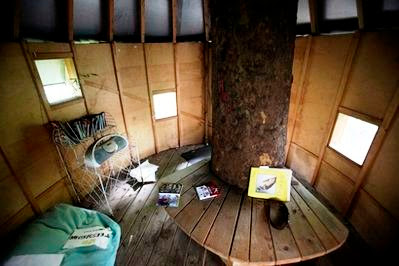 Photo Associated Press
Speaking to the Associated Press Melinda Hackett said the fight and the expense was worthwhile. “This is the little treehouse that could.”
Posted by Tom Miller at 2:43 AM