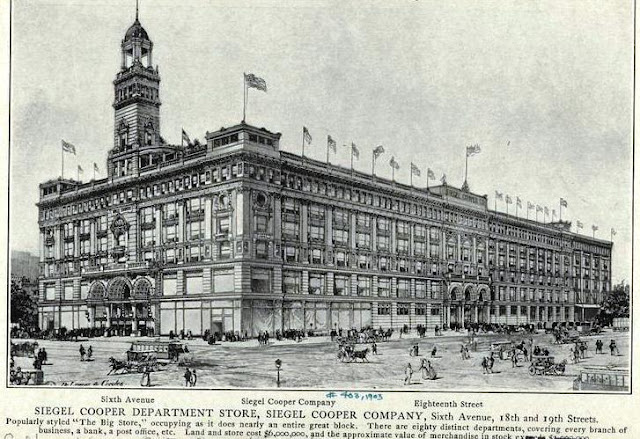 from the collection of the New York Public Library

In 1893 when the World’s Columbian Exposition opened in Chicago, Henry Siegel and Frank Cooper were running a highly successful department store there. The gleaming white, monumental architecture of the fair left a lasting impression on Siegel who suddenly envisioned a store unsurpassed world-wide.

Only two years later the designs had been drawn by architects DeLemos & Cordes; a colossal structure to be built on 6th Avenue – along the Ladies’ Mile – between 18th and 19th Street. It was intended to astound. As plans were prepared for filing with the Department of Buildings, The New York Times announced on March 23, 1895 the anticipated 85,560 square foot store. 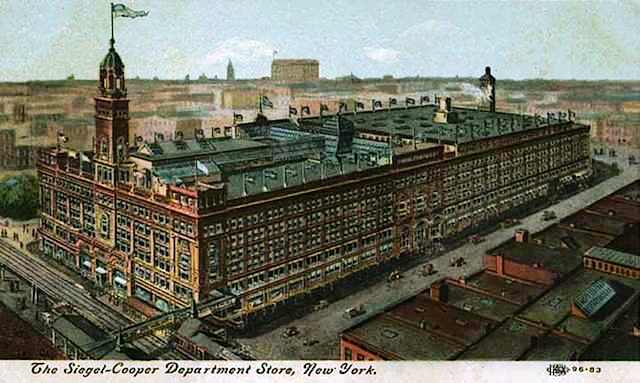 “Siegel, Cooper & Co. have recognized, as progressive New-York merchants have recognized also, that a dry goods building need not be a public eyesore in the street… A splendid tower will be built on the Sixth Avenue side, in the centre of the front, that will reach 250 feet above the sidewalk. This tower will be surmounted by a great cluster of electric lights that will be visible from a long distance. The walls of the building are to be of different kinds of stone, gracefully ornamented.”

The $4 million that Siegel and Cooper spent on their “gracefully ornamented” building bought them the largest department store in the world. The scope of the structure was unheard of – six stories tall and a full block wide, stretching back to Fifth Avenue. Lavish Beaux-Arts ornamentation in marble, yellow brick, terra cotta, copper and bronze recalled “the grandeur of ancient Rome.” 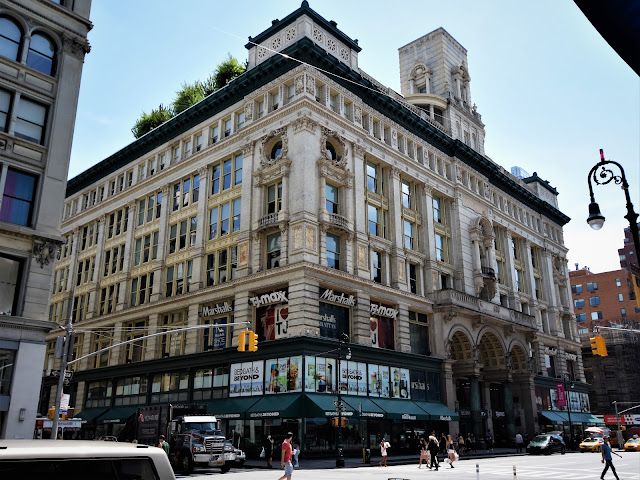 Two gigantic bronze, fluted pillars supported the triple-arched entranceway. On the second floor over-sized windows allowed passengers on the 6th Avenue elevated train to window shop. A ramp enabled those same passengers to enter directly into the store on the second floor. In ornamentation, sheer size and grandeur, Siegel-Cooper outdid all competitors.  Henry Siegel deemed it "The Big Store." 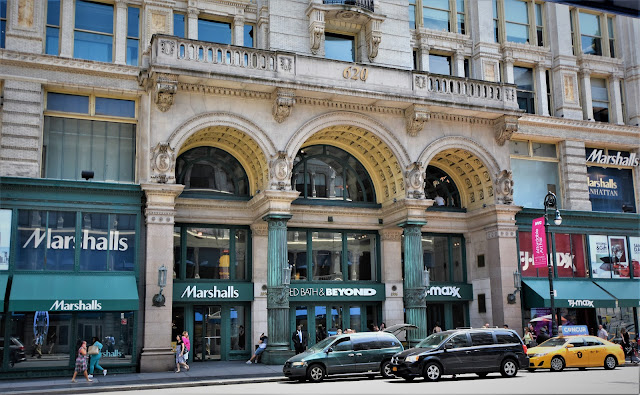 Central to the first floor was a fountain in the center of which was a 13-foot high statue of “The Republic,” by Daniel C. French. Costing $15,000 it was brass with face and arms of white marble. Colored lights illuminated the fountain. “The figure is a heroic one of a female in classical garb,” said The New York Times. “The arms are extended upward. One hand supports a staff of Liberty, the other a golden orb, on which an eagle perches. On the globe glows an electric star, the light of which is in vacuum and opalescent…”

Before long the phrase “meet me at the fountain” was a catch-phrase for shoppers along the Ladies' Mile.

The day after the store’s opening in 1896, The New York Times reported that nearly 150,000 people attempted to enter the store. Inside 3,000 employees were waiting to serve them. “Persons visiting Siegel, Cooper & Co.’s store will be spared the annoyance of seeing over-worked shop girls behind the counters and children of stunted growth running up and down stairs. There will be separate elevators for the use of the employees,” said The New York Times. For its children employees, Siegel-Cooper provided a classroom and two hours of school per day. 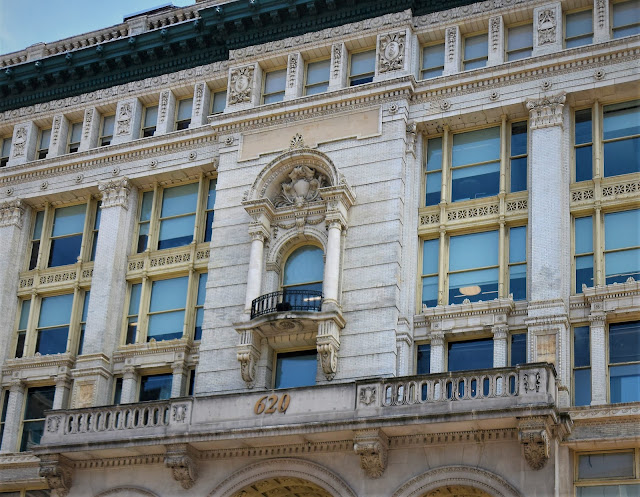 In addition to the expected goods – silverware, linens, clothing and china, for instance -- Siegel-Cooper sold groceries (canned goods were canned on the premises), furniture, pets and hardware. An enormous refrigerated room kept meats and dairy foods fresh.  In the fish department, huge tanks displayed the live fish for the shopper's ease of choice. On the roof, an vast conservatory offered giant palms, orchids and rare plants for sale.

Francis Morrone and James Iska, in their The Architectural Guidebook to New York City, wrote “The quintessential New York experience was to buy a five-cent ice-cream soda and sit beside the fountain, taking in the pageant of fashionably attired women making their shopping rounds.”


Of the 124 departments, some were found in no other shopping establishment. The store offered both a dentist and doctor office, a beautician and a barber shop, a post office, an office for theatre tickets and a bank.  In the basement the store operated its own plant for power, lighting, heating and ventilation.  The bicycle department had a track for test rides.

In September 1896 a rumor circulated that Siegel-Cooper would be offering a sale on bicycles -- $100 bikes would be sold for $9.99. Before dawn on September 14, 1896 several men in bicycle suits had lined up. By 7:00 the crowd had grown to a few hundred.

And it continued to grow.

An hour and a half later Police Captain Chapman estimated the number at 40,000, blocking 6th Avenue from 17th Street to 22nd. When the doors to the store were finally opened, one patrolman suffered two broken ribs in the crush of the crowd.  Upstairs in the bicycle department “The counter was overturned. The railings were broken. Cases of wheels were knocked down and men in trying to extricate themselves stepped on the bicycles and broke some,” reported The New York Times. “During the trouble dresses were torn and a few women fainted. No one besides the policemen were hurt much.”

There had never been any bicycles on sale that day.

By 1904 Henry Siegel, whom Joseph Devorkin called “the Napoleon of the Department Store Industry,” was financially over-extended. He sold his department store to Joseph B. Greenhut for $500,000. Greenhut later reported that Siegel cried during the transaction. Greenhut’s timing, however, was bad.

In 1902 the Macy Department Store had moved uptown to a block-encompassing emporium on West 34th Street.  Little by little the shopping district followed. By 1915 Greenhut’s store failed. Although he reorganized and reopened, it lasted only three years, closing for good in 1918.

As World War I raged overseas, Henry Siegel’s Renaissance-style palace was put into use as a military hospital. Where Edwardian ladies with broad-brimmed hats had shopped for laces and Limoges teacups, doughboys now recuperated in make-shift wards.


After the war the grand structure was reduced to loft space. In 1937 the central tower was removed and at some point the statue of The Republic from the fountain was shipped off to Forest Lawn Cemetery in Glendale, California.

Tishman Speyer purchased the mostly-empty building in 1987 and in 1991 exterior restoration was initiated. Now, along with most of the great emporiums of The Ladies’ Mile, the Siegel-Cooper building has been rejuvenated with new stores. The Siegel-Cooper had little alteration to its façade even at street level and the exterior looks very much as it did on opening day in 1896.