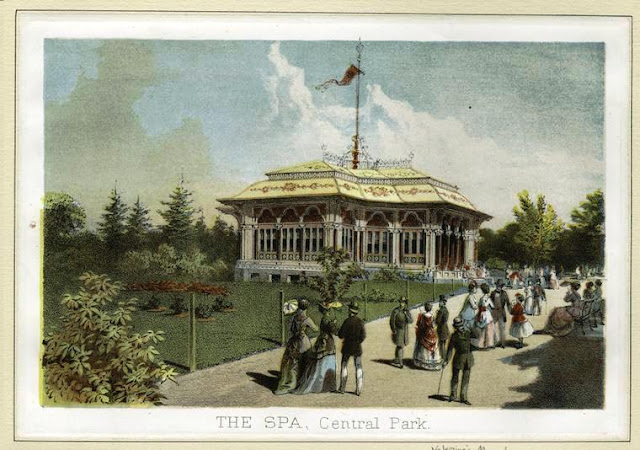 As the Civil War was coming to an end, Calvert Vaux and his assistant architect Jacob Wrey Mould began working on designs for a Mineral Water Pavilion at the northwest edge of the Sheep Meadow. The pavilion had been petitioned by the owner of a mineral water company, Carl H. Schultz. New Yorkers still remembered the cholera epidemic of 1832 that took the lives of 3,515 citizens. Not only were mineral waters considered healthful, but a “spa” for dispensing the waters would attract visitors.

The Board of Health bulked at the idea, putting a temporary halt to the plans pending their investigation. Reaction from the medical community was swift. The New York Times reported on May 29, 1866 that “…we find advancing to the attack…all the principal professors and doctors of the City, in one solid phalanx, united and unbroken.” Indeed Drs. Schultz and Warker, in a letter to The Times, berated the Board. 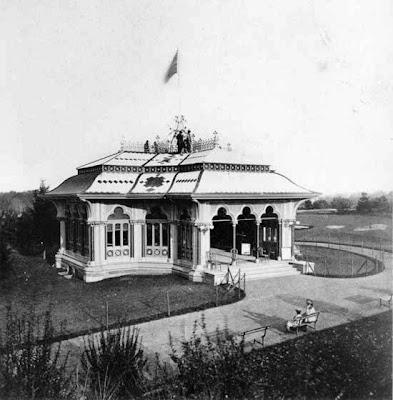 photo via the New York City Department of Parks

“The recent action of the Board of Health in regard to the introduction of our artificial spring waters in the Park has, no doubt, greatly surprised the medical faculty of this City, who have so largely endorsed these waters as the most effective and simple means of keeping the digestive organs in a healthful condition, and as the most natural remedies in many affections of the digestive apparatus,” they wrote.

“Is it imaginable,” they asked, “that seltzers-water, the chief remedy in Asiatic cholera, the very milk of our mother earth, as it has been called by a distinguished writer, should be decreed as injurious in cholera times?”

The Board of Health, properly scolded, recanted their objections and the Mineral Water Pavilion went forward. Costing approximately $30,000, it was a Moorish, or “Saracenic,” fantasy. The tiered Oriental-style roof, ornately and colorfully patterned, sat above a colorful one-story wooden building with slender,  columns and arched windows.

It was an immediate success. In July of 1869 The Times noted that “Thousands of people visit the springs early in the morning for the purpose of drinking the waters, and for recreation.” Residents nearby petitioned the Park Commissioners to have musical entertainment during the morning hours when most people took the water, the cost of which would be absorbed by Schultz.

The petition was approved and “The Schultz Band” began their recitals every morning during the summer months from 6:00 am through 8:00 am. According to contemporary reports the “spa,” as it was sometimes referred to, was especially popular with moneyed German Jewish immigrants.

Carl Schultz died in 1897 and Joseph Hoblitz took over the operation. By the 1920s however, the mineral springs were gone and Vaux and Mould’s exotic little building was a soft drink and candy shop.


As with so many treasures of Central Park, the mid-20th century was unkind to the Pavilion and in 1957 it was demolished. One of Central Park’s most delightful architectural gems was lost forever.
Posted by Tom Miller at 3:03 AM