Included in the original designs for Central Park was a children’s area where Victorian youngsters could play in the fresh, open air and enjoy amusements not available elsewhere in the city. Among those amusements was a carousel.

In those early days the term referred variously to the ride or the building that housed it. In his 1882 “New York by Gaslight,” James D. McCabe, Jr. wrote “A few steps north of the swings is 'The Carrousel,' a circular building, fitted up with hobby horses and merry go rounds, for the amusement of younger children.”


The "hobby horses and merry go rounds" (there was actually only one) McCabe described were gaily colored and fantastic – certain to captivate young imaginations. Opened in 1871, the great turntable ran on mule power. As children laughed in delight, riding their wooden painted steeds above, a mule in a pit below ground powered the mechanism along. The animals, plodding along on a treadmill, were trained to stop and go when the operator stomped his boot on the carousel floor.

In May of 1886 Park Commissioners proposed an edict against amusements in the Park on Sundays – a motion that elicited rapid response from the public. Commissioner John D. Crimmins admitted that “The carrousel was the special delight of small boys. No complaints had been made against these amusements.”

The public opinion won out and the carousel kept turning.

The city was captivated in the Spring of 1905 as The New York Times readers followed the story of 5-year old tourist Marie Van Mater of Denver who, while riding the carousel had carefully laid her rag doll, Herbert, on the ground nearby. The little girl had done so because the lion on which she rode “was so fierce that she feared for Herbert.”

After the girl had ridden several times, she found Herbert had been stolen. She was so distraught that the staff of the Netherland Hotel where her family was staying scoured the Park around the carousel and her mother posted an ad in The Times:

The hotel was besieged with people carrying dolls, claiming to have found them in the Park. “Five dollars reward tempted those who were foolish enough to imagine that a five-year old girl would not know her own precious Herbert from every other doll on earth,” said The New York Times.

In the end a little impoverished waif returned Herbert, refusing the reward because she had stolen him. Another story from the carousel ended happily.

In 1912 the days of underground mule power were, happily for the mules, a thing of the past when an electric motor was installed. Then in 1924 the carousel burned to the ground.

The new carousel spun merrily along until November of 1950 when this one, too, burned. “The Central Park carrousel, dear to the hearts of small New Yorkers since 1871, was ruined by fire before dawn yesterday. Its forty-four gaudy wooden steeds were charred into black immobility, while fire and water combined to halt its mechanism and silence its carnival music,” reported The Times.

A search for a suitable replacement was initiated.  Amazingly, a wonderful, if derelict, carousel carved by the Brooklyn firm of Stein & Goldstein between 1908 and 1911 was found abandoned in an old trolley terminal at Coney Island. Utilizing a $75,000 gift from the Michael Friedsam Foundation that included a new building, the New York City Parks Department restored the ride at its Randall's Island facility; repainting the nearly life-sized horses and updating the equipment. 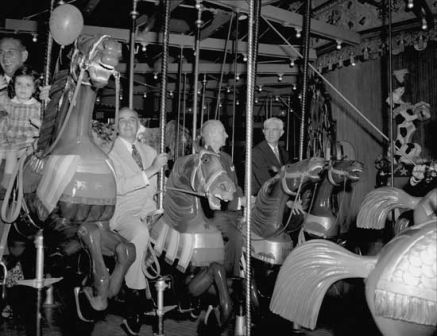 Mayor Impellitteri rides the restored carousel 1951 - photo NYPL collection
On July 3, 1951 the carousel was operating with rides for free on that opening day. Mayor Impellitteri rode a chestnut charger along with other politicians and hordes of shouting children. With 58 hard-carved horses and two chariots, the carousel is one of the largest in the country and considered one of the finest examples of American turn-of-the century folk art in existence. 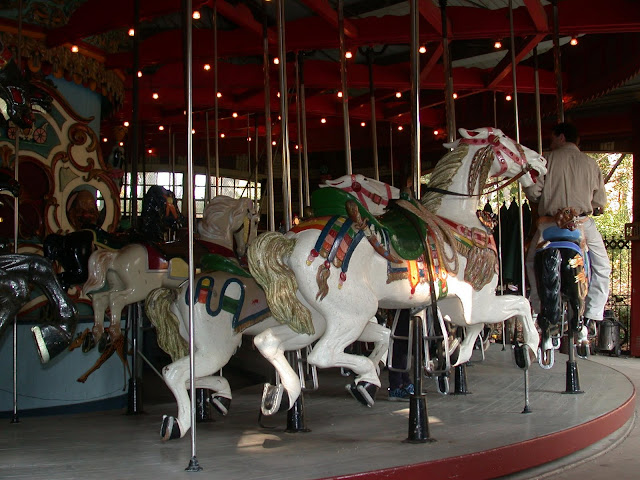 In the 1990s the Central Park Conservancy funded new landscaping around the carousel and, once again, the restoration of the horses.  More recently, the band organ was refurbished by Gavin McDonough.

Throughout the years the carousel has attracted young and old, rich and not-so-rich (“Mrs. John F. Kennedy rode the horses on the Central Park carousel shortly before noon yesterday with her son, John Jr.” reported The Times in 1964).

Many thanks to Richard Concepcion, member of the National Carousel Association for his invaluable input on the above.  Mr. Concepcion worked on the Central Park Carousel from 1973 to 1980.
Posted by Tom Miller at 3:34 AM