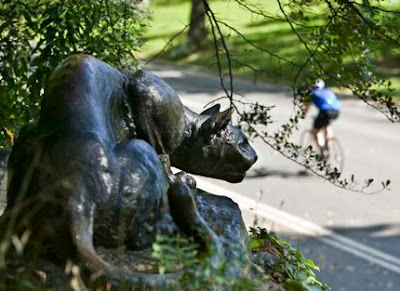 Things weren’t going very well for Edward Kemeys after the Civil War. A former artillery officer, he tried his hand at farming but failed. Then, hearing of available work clearing ground for the planned Central Park, he headed for New York City in 1868. Hired at $2.00 a day by the engineering corps as an axe-man, Kemeys absorbed the natural environment that surrounded him there.


One day in 1869 Kemeys was casually observing the animals in the Menagerie at the old Arsenal on the east side of the Park.  There an aged sculptor was working on the head of a wolf. The axe-man watched, transfixed.

Remembering that moment decades later, he said “Quick as lightning came the thought…I can do that!”

Untrained in anything other than artillery, plows and axes, Kemeys began practicing animal sculpture. Within three years he received a commission to sculpt the life-size bronze "Two Hudson Bay Wolves Quarreling Over the Carcass of a Deer" for Philadelphia’s Fairmount Park.  By 1877 he exhibited his work in Paris and London to much acclaim.

Kemeys established his studio back in New York where he had found his inspiration and where he subsequently produced many of his greatest works. From this studio he fostered a widespread popularity in animal sculpture in late 19th Century America.  He became interested in the large American animals threatened by encroachment of westward moving cities and he made extensive trips to the West to study the wildlife.

Kemeys’ work caught the eye of “a number of modest gentlemen” who, in 1881, wanted to present a sculptural gift to Central Park. They asked the artist to sculpt “The Still Hunt” – a life-sized mountain lion crouching in a realistic hunting pose. Two years later, on June 12, 1883, it was unveiled. 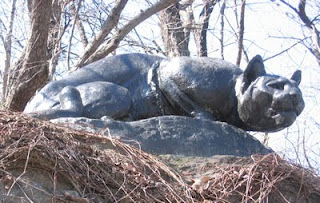 The New York Times reported that among those assembled were “Park Commissioner Wales, Park Superintendent Jones, Mr. Edward Kemeys, the uncle of the sculptor; a young woman with a red parasol, and 11 historians of the daily newspapers.”

Because the statue is installed on a stone outcropping high above the East Drive, the Park Superintendant made a perilous few attempts at unveiling the work before finally succeeding. “Then,” reported The Times, “the young lady with the red parasol said: ‘Oh, my!’ The gentlemen exclaimed ‘Ah!’ and all went round to the drive to look at the statue, while the police dispersed the crowd.”

Readers learned that “The Still Hunt represents a life-size American panther, with savage head, fierce, snarling lips and bristling hair, crouching close along the ground for a spring, with arched body and curling tail. It is facing to the north, and is in fine view from the east drive, on the gray rocks with the surrounding green.” 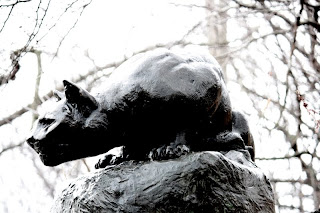 Edward Kemeys took no commission for his “Still Hunt.” The money donated by what The Times had called “a number of modest gentlemen” was used only for the casting of the statue at the Maurice J. Power foundries.


In 1892 he moved to Chicago for several years, creating several works for the World’s Columbian Exposition of 1893 and eventually sculpting the large bronze lions flanking the entrance to the Art Institute of Chicago. Kemeys died in May of 1907, critics praising his body of work as showing “powerful conception and individuality, as well as a keen perception of animals’ traits of character.”
Nowhere is this more evident than in “Still Hunt.” 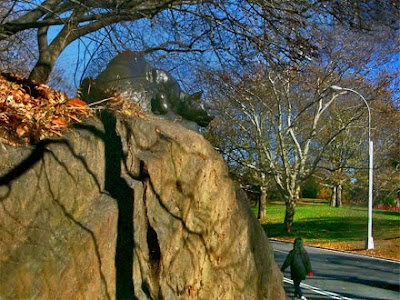 In 1974 vandals cut off and stole the slinky bronze tail and the statue remained defaced until 1988 when it was restored under the Municipal Art Society’s “Adopt-A-Monument” program. The missing tail was reproduced and the bronze surface was reconditioned.
Today, one hundred and thirty years after its unveiling, unsuspecting joggers and hikers – like the young lady with the red parasol – emit a shocked “Oh, my!” when encountering Kemeys’ “Still Hunt.”
Posted by Tom Miller at 2:52 AM