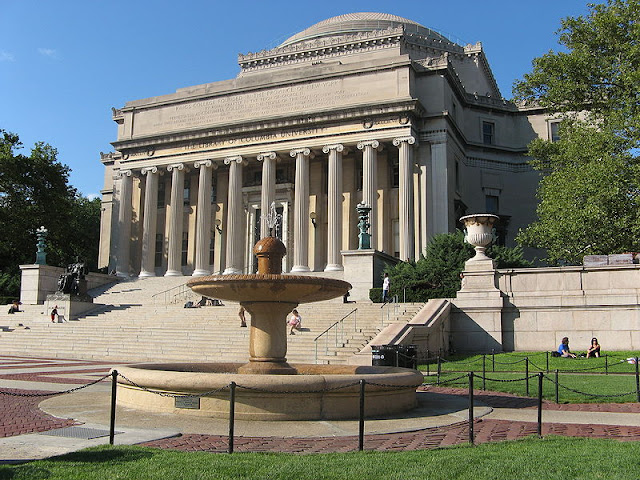 In the spring of 1895, Columbia University’s new Morningside campus was an accumulation of small brick-and-stone buildings and houses. University President Seth Low envisioned a grand focal point for the campus in the form of a library.


The alumni were less than enthusiastic for the costly project so Low defiantly undertook it himself. On May 7 of that year The New York Times reported that “President Seth Low made a formal offer to assume personally the cost of erecting the new library at One Hundred and Sixteenth Street, on Morningside Heights, the site of the new Columbia College building. The building is to cost $1,000,000 and is to be a memorial to President Low’s father; the late Abiel Abbot Low, ‘a merchant who taught his sons to value the things for which Columbia stands.’”

According to The Times, the gift “produced a profound impression” on the Trustees who immediately accepted.

As Low had visualized, the library was to be built “in the centre of a terrace occupying the highest point of land of the new site for the college buildings.” He commissioned Charles McKim of the architectural firm McKim, Mead and White to design the structure. The Times hinted of what was to be expected. “The Library Building itself will be in the classic style, designed in the form of a Greek cross, and surmounted by a dome.”

Two years later, when the building was finished, a monumental Neo-Classical temple sat majestically above a grand cascade of wide stone stairs and terraces. McKim had drawn his inspiration for the main structure from the Pantheon and from the Baths of Diocletian for the immense arched windows. Ten granite ionic columns rose 35 feet forming the entrance portico. Above the central structure the largest freestanding granite dome in the country crowned it all.

Great bronze doors opened from the portico into a “lofty marble portal to the main vestibule, paved with marble slabs” and ornamented with marble pilasters. Here busts of Zeus, Appolo and Pallas Athena were displayed. Ahead of the vestibule was the rotunda – the main reading room. Illuminated by the huge windows, with the 70-foot diameter dome above, the rotunda was encircled by a 29-foot high colonnade of rich green Connemara marble from Ireland. The columns sat on black Belgian marble bases with cast-bronze capitals.
The rotunda rose to a height of 106 feet and from an upper gallery Roman and Greek philosophers or statesmen – Demosthenes, Sophocles, Augustus Caesar and Euripides – stared down upon the students reading below.

By 1934 the library had outgrown its home and the new Butler Library was constructed. Seth Low’s grand gift became the administrative center of the campus, housing the offices of the President and Provost among other administrative offices. The imposing rotunda became the site of exhibitions and ceremonial events.

McKim’s masterful design was designated a New York City Landmark in 1967. A year later The Low drew national attention when it was occupied by students protesting, among other things, the Vietnam War. The protestors barricaded themselves within the office of the president, rifling through files searching for incriminating documents. The university was forced to close for days and national news coverage followed “The Columbia Protests” until the police finally routed the students with tear gas several days later 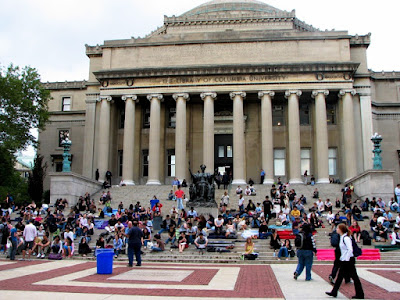 On December 23, 1987 the Low was included on the National Register of Historic Places, the designation noting that “…this building is one of the most important Neo-Classical structures in America and is one of architect Charles Folen McKim's masterpieces…This campus design is today recognized as a classic of Beaux Arts planning principles.”
Posted by Tom Miller at 2:51 AM