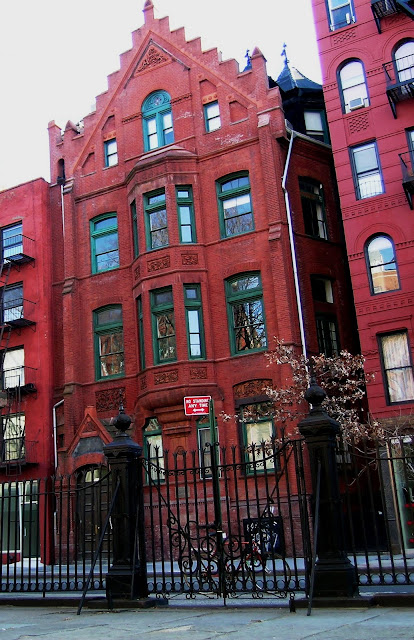 John Jacob Astor III was interested in making money. His wife, Charlotte, was interested in spreading it around – much of it going to her favorite charities. As John Beck said in his 1898 The National Cyclopaedia of American Biography, “He furnished the money; she distributed it.”

In mid-19th Century New York the squalid Five Points section of the city teemed with waifs known as “street arabs” – the orphaned or abandoned children of prostitutes, drug addicts and alcoholics -- who fended for themselves. In response, The Children’s Aid Society was formed in 1853 to “ensure the physical and emotional well being of children and families.” Charlotte Astor embraced the cause. John Beck wrote “She expended not only large sums, but personal energy and sympathy in behalf of the poor of New York, contributing thousands of dollars to the Children’s Aid Society.”

In its early days, the Society sponsored “The Orphan Train Movement;” whereby school-age boys were sent off to the American West to work for settlers on their farms. Townspeople would inspect the boys, choose the ones they wanted, and put them to work.  There was no adoption, no birth certificates and no pay other than room and board.  While abolitionists decried the practice as a form of slavery, others like Mrs. Astor insisted the boys were escaping a much worse fate on the streets of Manhattan.  Every Christmas she spent about $2000 to send one hundred orphans westward.

The Society also provided lodging houses for newsboys and bootblacks – charging 6 cents a night for a bed, a hot meal, a bath and a sermon.  Once a year the children were entertained with a “Summer Festival” complete with the crowning of the Queen of May and numerous “addresses;” proof, according to The New York Times, that the Children’s Aid Society “at least have not forgotten that ‘the poor we have always with us.’”

Charlotte Astor died of cancer in 1887 after decades of supporting the Society.  John Jacob Astor determined to memorialize her by building a new “Industrial School” in the impoverished Italian 14th Ward neighborhood.  Rather than simply ship the indigent children off to the West, the school would teach them the fundamental skills necessary to make a living.  Astor purchased the lot at 256-258 Mott Street for $21,000 and hired Calvert Vaux to design the school.

Vaux produced a visually-entertaining red Pennsylvania brick Victorian Gothic structure with terra cotta and brownstone trim.  Brick buttresses and a pointed Gothic entranceway draw attention upward to the stepped Dutch gable. Finished in 1888 it cost Astor $42,000.  Rising four stories above the street, it included a “roomy basement” with a kitchen and separate dining rooms for teachers and students. The first floor housed kindergarten and primary classrooms, the second and third floor contained classrooms for older children and the top floor housed rooms for primary and industrial school work. A playground was located in the rear.

In the main hallway a brass tablet read:


This building has been erected in affectionate
Remembrance of
Mrs. Charlotte Augusta Astor
By her husband.
John Jacob Astor
New-York 1888
Upon the school’s dedication The New York Times said “The memorial to Mrs. Astor will form an attractive centre of industry, thrift and cleanliness in a region which is noted for none of those characteristics.” The article described the neighborhood as “a district of wretchedness, poverty and squalor.”
Astor’s monument to his charitable wife served the underprivileged well into the 20th Century.  Today the neighborhood is more Chinese than Italian and the building has been converted to cooperative apartments. The ground floor façade is stained with the attempts to remove graffiti; however the integrity of Calvert Vaux’s 14th Ward Industrial School shines through.
Posted by Tom Miller at 2:50 AM