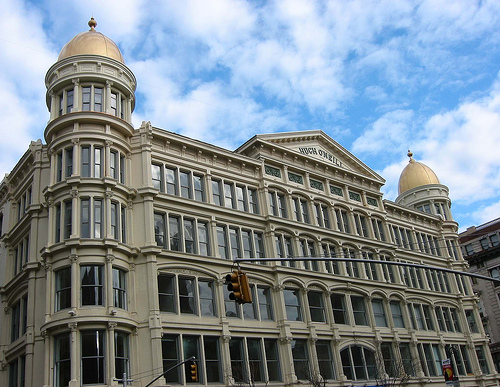 Composed of a string of retail palaces built in the 19th Century, The Ladies' Mile lines 6th Avenue from 18th Street to 23rd Street.  A century ago women wearing leg-of-mutton sleeves and plumed hats crowded the sidewalks as they bustled from one emporium to another.  Important among these  was the Hugh O'Neill Dry Goods Store at 655 6th Avenue.
O'Neill's building was unique along The Mile:  it was the only block-long cast iron facade, it was painted yellow -- a true novelty at the time, and on either corner a full-story cylindrical tower supported a bulbous shiny dome.  To this day the O'Neill building stands out among the architectural crowd of 6th Avenue.

O'Neill was born in Belfast, but his parents brought him to New York as a child in 1844. After the Civil War he opened a dry goods store near Union Square where the carriage class had begun shopping in stores like Tiffany & Company.  But in 1870 the merchant set his sights on a move to 6th Avenue and began buying up small buildings.

He commissioned Mortimer C. Merritt, an architect who became known for his lush cast iron facades and in 1887 his new store was completed.  It was he first of The Ladies' Mile department stores and deeply cast in the building's pediment was HUGH O'NEILL, lest anyone miss who owned the store! 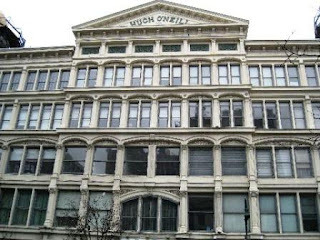 The 6th Avenue El appeared around the time of O'Neill's new opening, probably adding incentive to the growth of The Ladies' Mile and definitely guanteeing success for Hugh O'Neill.  Five years later he had 2500 employees on his payroll and in 1895, using the talents of Merritt again, he raised the domed towers and added a fifth floor.

O'Neill did not live to see the great mercantile houses leave 6th Avenue as they moved north to 34th Street and beyond.  The multi-millionaire storekeeper died in 1902.

The Ladies' Mile rapidly declined.  By the 1920 all the great dry goods stores were gone.  The once lavish retail palaces became home to small industries.  Sometime before the middle of the 20th Century the shiny domes of Hugh O'Neill disappeared.  And by the late 1970s, The Ladies' Mile was an eerily ghostly, rusting row of mostly-empty buildings.

Historic preservation stepped in when the Ladies' Mile Historic District was established in 1989.  The grand old emporiums began, one by one, breathing new life as they were restored and became home to modern stores .

Hugh O'Neill's however, was not to become a store again.  In 2003 it was purchased for $37 million and recycled into luxury condominiums.  Two penthouse floors were added, invisible from street level, and the fanciful beehive domes were rebuilt.  Today the building gleams with its coat of crisp white paint. 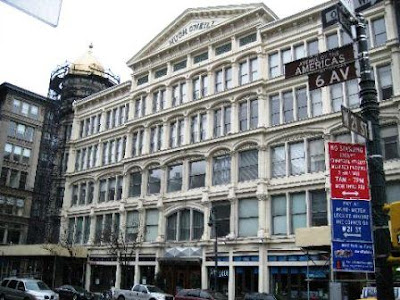