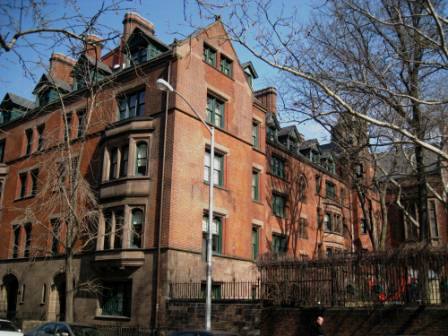 Forty-one years after the American Revolution, the General Convention of the Espicopal Church established a "general seminary" to be built in New York.

A year later, in 1818 Clement Clark Moore, best remembered for his A Visit from Saint Nicolas, donated 66 tracts of land from his estate in Chelsea, which equaled a full city block -- the area from Ninth Avenue to Tenth Avenue and 20th Street to 21st.  Three years later Trinity parishioner Jacob Sherred left a princely endowment of $70,000 to help with the cause.

In 1826 the first building, a stone Gothic Revival structure, opened in what came to be known as Chelsea Square.  By 1836, a second building was completed, nearly identical to the first.  Seminarians studied in a rural, idyllic setting.

By the 1870's however the northern-bound city was encroaching on Chelsea.  Students were exposed to the temptations and worldliness of the theatre and commercial districts that grew ever nearer.  Financial troubles plagued the school, as well. 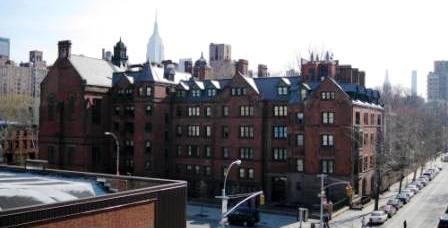 But when the wealthy Eugene Augustus Hoffman took over as Dean in 1879 things changed.  Hoffman poured personal money into his plan for the institution.  Drawing from the plan of Oxford University he envisioned a central quadrangle flanked on three sides by Gothic Revival buildings.  He retained Charles Coolidge Haight to design the complex and what emerged is a rich, connected collection of brick-and-stone buildings embracing the central lawn in a U-shape.  The project lasted from 1883 until 1902.

Gables, turrets, oriel windows, and stained glass harmoniously combine into a romantic whole.  Haight's centerpiece is the Chapel of the Good Shepard and its English belltower.  Over the main doors is an exquisite bronze bas relief and the 15 tubular bells which are tolled daily by the Guild of Chimers is the oldest set still in use in the country.

Adhering to the English prototype, Haight designed the dining hall with great stained glass windows, soaring cathedral ceilings and heavy timbers -- looking for all the world like a scene from Harry Potter.  Here is St. Mark's Library with the world's largest collection of Latin Bibles.  The south side of the complex facing 20th Street where a stone wall is topped by a heavy cast iron fence is the only vantage point for the passer-by to get a glimpse of the serene campus.  The quadrangle sits on an elevated expanse about six feet above the sidewalk making the complex literally, if not spiritually, above the outside world.

The original 1827 building on the east end was replaced by an unfortunately incongruous building, Sherrill Hall, designed in 1960 by O'Connor & Kilham.  Sherrill Hall was razed and a mixed-use five-story building was erected in 2009 that includes retail and residential space.  While the new structure does not pretend to be 19th Century Gothic Revival, it more sympathetically blends in.

﻿
Incredibly, the seminary considered abandoning this, the oldest Episcopal seminary, in the 1980's.  Instead, thankfully, it was decided to put $68 million into the restoration of the venerable institution.

A recent alteration on the 10th Avenue side to accommodate the new Desmond Tutu Center required the removal of part of the great rough stone wall that protected the Seminary for almost two centuries.  The subsequent design was extremely well thought-out and the result is nearly seamless.

Without question the most distinctive complex of buildings in Chelsea, the General Theological Seminary is well worth walking by on your Sunday stroll.

non-credited photographs taken by the author
Posted by Tom Miller at 11:08 AM