Tucked away between brick buildings and protected by brick-and-stucco walls, three tiny urban cemeteries hide from the casual passer-by.  They chronicle the history of the venerable Congregation Shearith Israel and sit as silent anachronisms in 21st Century Manhattan.
The earliest surviving cemetery (the exact location of the first is unknown) dates to 1683 and sits on St. James Place near Chatham Square in Chinatown.
The original 23 Spanish and Portugese Jews fled the Inquisition, arriving in what was then New Amsterdam in 1654.  More than 300 years later, it is one of the oldest surviving historical sites in Manhattan.

Greenwich Villagers know well the second Congregation Shearith Israel cemetery on West 11th Street off 6th Avenue.  This tiny triangle of land holds about 20 headstones, a fraction of those buried here when the cemetery was a much larger square burial ground.  Burials began here in 1805 when Greenwich Village was far from Manhattan to the south and the surrounding area was rural countryside.  By 1830, however, the city's grid plan was taking place and West 11th Street cut through the plot.  The majority of the deceased were disinterred and moved north to the new cemetery on West 21st. 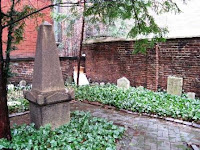 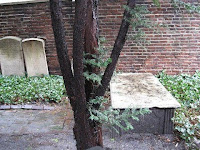 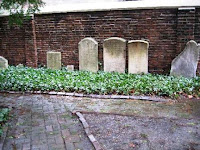 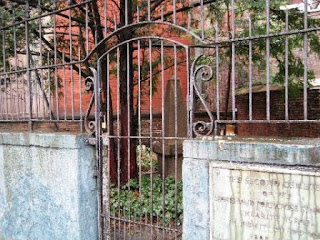 above photos show the 11st Street Cemetary in 2010
The Congregation established the final cemetery on West 21st Street just west of 6th Avenue.  About 150 headstones survive here; however with the demolition of the row of buildings on 20th Street allowing weather conditions into the previously sheltered plot, the stones are quickly eroding away.  Incriptions in Hebrew, Spanish, Portugese or English which were astonishingly crisp a decade ago are now all but illegible.
Opened when the disturbed burial plots from 11th Street were relocated, the last interment was in 1851, just before the 1852 law  making burials in Manhattan illegal.   These three incredible, hidden cemeteries stand in silent testimony to a rich yet harsh 300 year history of Jews in New York.
﻿
Posted by Tom Miller at 6:51 AM