Madison Avenue circa 1910. I love this shot. 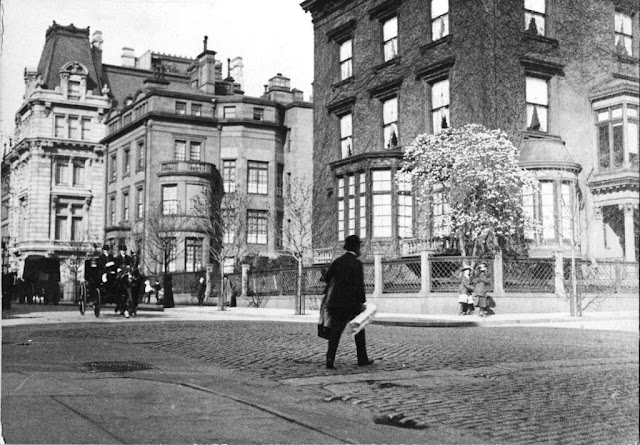 I found this shot yesterday to show the De Lamar mansion (far left) looming over the J. P. Morgan residence (in the middle of the photograph) among the wonderful photos in the New York Public Library collection.  The more I studied the photo the more I fell in love with it.

Last night I emailed my friend Paul the shot, knowing he understands my peculiar obsession with everyday social history, especially in New York.  Shots like this intrigue me because they are, quite literally, an instant in time frozen for us to see.

There on the corner of 36th Street and Madison Avenue are two little neighborhood girls -- girls living a quite privileged existence at home with private teachers and nurses and maids  -- roller skating past the mansion that in a few years J.P. Morgan would raze to build his private library.  A century ago those little girls enjoyed a spring day under a small tree in blossom without a care in the world, captured forever by the camera.

Notice that all the draperies are pulled in the three great houses.  Sunlight was known to be the greatest threat to the rich fabrics and carpets in those parlors and bedrooms.  So to preserve their fine upholstery, wall coverings and linens, the interiors of the New York mansions were always dim and, I would think, gloomy.  Only on Christmas Day would the wealthy Manhattanites pull open their draperies and illuminate the interiors so passing common folk could get a once-a-year peek inside the great homes.

Paul has the idea that the woman and man on the sidewalk between the two brownstones are having a not-so-happy exchange.  Hard for me to tell.  But I especially love the Little Lord Fauntleroy outfit on the boy running north towards 37th Street.  If you thought those fashions were only in the movies, think again!

There is a quiet, slow pace to the photo.  Here a commercial covered cart shares the block with the high-class carriage complete with liveried coachmen in silk top hats.  It was a time before automobiles and one-way streets and traffic.

And when I study that photograph, I wonder what Mrs. Morgan was doing inside that residence when the camera clicked.  Was Alice De Lamar at home in her French chateau on 37th Street?  And where was the man with the parcel going so quickly?

A very common moment, captured forever, making it extremely uncommon and precious.
Posted by Tom Miller at 6:25 AM