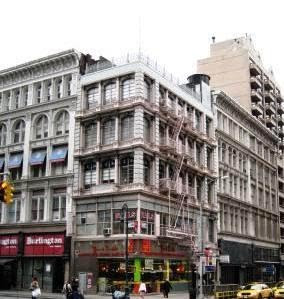 Snugly tucked into the corner of 6th Avenue and 23rd Street is a beautiful, polychromed little building that has seen more than its share of ups and downs.  Built as a high-end jewelry store in the 19th Century, its station in life has declined considerably; but the vestiges of better days are still clearly evident.

William Moir came to New York in 1840 and was immediately apprenticed to a watchmaker, Alexander Martin.  A few years later he became journeyman with jeweler Emmett Pell on Hudson Street and when Pell retired in 1844, Moir bought the business with his brother John.  It was when John retired in 1870 that William decided on a move his business uptown.

Anticipating the migration of the shopping district which would create The Ladies Mile within a decade, Moir chose the 23rd Street corner and commissioned architect Theodore A. Tribit to design his 5-story cast iron building.  The result was a beauty -- expansive, arched windows allow exceptional light inside and make the facade light and airy.  The cast iron of the upper three floors imitates stone quoining, each floor being defined by a broad, richly-decorative band.  Graceful pillars support quasi-balconies on the 6th Avenue side.  Ornate balustrades double as roof cresting. 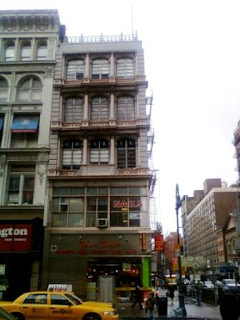 Moir's choice of location turned out to be a good one.  The 6th Avenue elevated train opened in 1878 and 6th Avenue became the mecca for high class shoppers.  According to a New York Times article in 1872, Moir's store offered "a fine selection of French clocks and bronzes, especially imported by him, and a yet larger stock of watches, native and foreign, jewelry, diamonds, and silver-plated ware. The diamond jewelry is noticeably good, and is all made on the premises."

In 1889, in an effort to jump on the 6th Avenue bandwagon, Ehrich Brothers decided to move their dry goods emporium from 8th Avenue to 6th Avenue, eyeing the entire block from 22nd to 23rd Streets.  The problem was Moir's jewelry store.  He wouldn't sell.  In resignation, Ehrich's built their massive store around Moir's little corner building, having entrances on both 6th Avenue and 23rd Street.

William Moir died in 1896, The Times calling him "one of New York's oldest and best known retail jewelers."  His wife commissioned Tiffany Studios to create a stained glass memorial window for First Presbyterian Church on lower Fifth Avenue where he had been treasurer for over 20 years.  The window celebrates Moir's Scottish roots with panels depicting St. Columba. 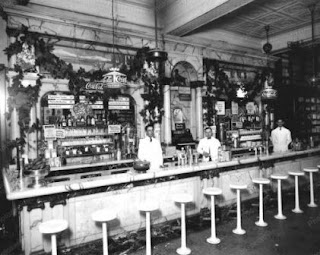 Shortly thereafter the jewelry store became home to one of Riker's Drug Stores; Riker's having 25 branches in New York City and three laboratories in Manhattan.  Ask many local historians about the little building at 711 6th Avenue and they will probably answer that it was a drug store,  William Moir's exclusive store fading from memory.

Today the Moir building stands proud, if a little embarassed.  The cornice disappeared at some point and all traces of Tribit's ground floor are gone.  An unfortunate but necessary fire escape disrupts the flow of the architectural design on the 23rd Street side.  Inside, where once cases of silver flatware, gold watches and diamond earrings were displayed to women in plumed hats carrying parasols under their arms, customers now buy chicken wraps and bottled water.

But despite some hard use, the Moir building is still a beauty.
Posted by Tom Miller at 4:16 AM