What's better than knowing something about New York that hardly any New Yorkers know? 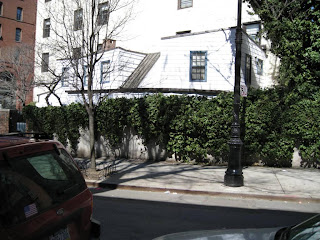 Hidden behind an ivy-covered wall at the corner of Charles Street and Washington Street in Greenwich Village is one of the most unexpected structures in the city.  A tiny clapboard farmhouse, it has a side yard, a miniature driveway, and hardly a right angle to be found.
This crooked little house looks as though it had been sitting there watching the Village grow up around it for 200 years.  In fact, it's a relatively recent resident of this venerable neighborhood.
Originally built at York and 71st Street the little house became surrounded by tenement buildings until it was no longer visible from the streets.  Interestingly, this is not the only farmhouse in Manhattan so disguised ... a similar little house in the Hell's Kitchen area between 38th and 39th Streets off 9th Avenue is now temporarily visible after 19th Century tenements and commercial buildings were pulled down in 2009.
In 1966 the owners, Sven and Ingrid Bernhard, faced a problem.  While they owned the house they called Cobble Court, they didn't own the land.  The Roman Catholic Archdiocese did...and it wanted to build a home for the aged on the site.  The quirky little house was slated for bulldozing, along with the surrounding tenements.
So the Bernhards purchased the 3600 square foot lot on Charles Street and in the pouring rain on March 5, 1967, the entire house (including the cobble stones from the courtyard) was packed up on a flatbed and moved to the Village. 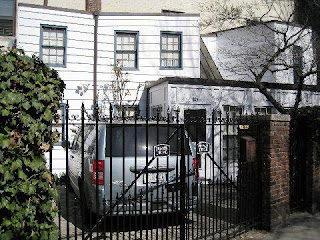 Not long after, a little girl peered out of the car window as her father drove past 121 Charles Street.  She never forgot the fairy tale house behind the wall.  Nearly two decades later, she stumbled across it while roaming the Village with her husband.  There was a FOR SALE sign on the gates.  Not for long.
Suri Bieler and her husband gently restored the tiny lopsided house and when their son came along, they extended the house with such compassion to the original structure that even the windows are crooked, earning them an award from the Greenwich Village Historical Society.  I generally do not agree with altering vintage structures, but when the addition is virtually seamless and undetectable -- I'll relent! 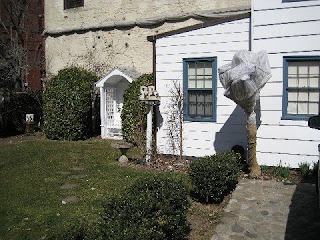 The side yard is peaceful and idyllic with flowering shrubs and a lush lawn.  A 1920s style garden seat and a birdhouse that is a scale version of the crooked little house completes the picture.
A one-of-a-kind house, this one barely escaped the bulldozer and is a wonderful find on a Village stroll.

non-credited photographs taken by the author
Posted by Tom Miller at 6:31 AM