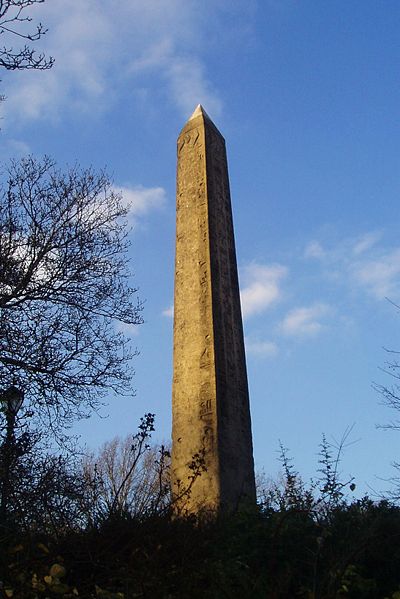 Originally one of a pair, the 68-foot high stone was carved of red granite, quarried in Aswan, around 1450 BC on the orders of Pharoah Thutmosis III -- best remembered as the pharoah who was swallowed up by the Red Sea while pursuing Moses and the Jews.  He had them installed in the Temple of the Sun in the city of On (or as the Greeks called it, Heliopolis) as part of his jubilee.
Two centuries later, to memorialize military victories, Ramesses II added the hieroglyphs.  In 12 BC the Romans moved the obelisks to Alexandria and installed them in the Caesareum, Cleopatra's temple in honor of Mark Antony.  Both obelisks toppled at some time, one during the earthquake of 1301, and they lay on their faces for centuries.
In the late 1800s the government of Egypt gave a similar obelisk to the city of Paris.  Then in 1877 one of the Thutmosis obelisks was presented to London.  With typical 19th Century New York City Euro-envy, public outcry arose.  Wasn't New York as important as London and Paris?  New York, it was deemed, was entitled to an ancient obelisk.
The Commissioner of Public Parks of the City of New York, Henry G. Stebbins, started a fund raising effort to move the obelisk to New York.  William H. Vanderbilt stepped up with a donation of more than $100,000 -- and with the signing of one check the fund raising was completed.  Stebbins then wrote two acceptance letters to the Khedive of Egypt and sent them to the Department of State.  The City of New York eagerly accepted the gift of an Egyptian antiquity before the Egyptian government knew anything about  it!
Judge Elbert Eli Farman, then US Diplomatic Agent and Consul General to Egypt, approached the Khedive in March of 1877 and requested an obelisk.  Because of the exceptionally friendly terms between Egypt and the US at the time, the gift was promised in writing in May of that year (Farman was also responsible for large amounts of other Egyptian antiquities and coins ending up in the collection of the Metropolitan Museum of Art).
So how do you move a 240-ton piece of rock 68 feet long from Egypt to the United States?  That was the problem turned over to Lt. Commander Henry Honychurch Gorringe, on leave from the US Navy.  Three years later, in 1880, the plans were ready.  The first task was to get the monument from vertical to horizonal.  After one scare during which the obelisk nearly came smashing to the ground, it was transported seven miles to Alexandria to the waiting steamship Dessoug.
The Dessoug was put in dry dock, an entrance opened in its hull far below the water line and the giant pillar rolled into the hold.  On June 12 she shoved off for New York City, arriving on July 20.  A team of 32 horses pulled the oversized souvenir to Central Park.
The ceremony for the laying of the cornerstone was held on October 2, 1880.  An elaborate parade from 14th Street to 82nd Street was composed of over 9000 Masons.  Reports estimate the spectators along the route at over 50,000.  The Grand Master of Masons in the State of New York presided over a full Masonic ceremony. 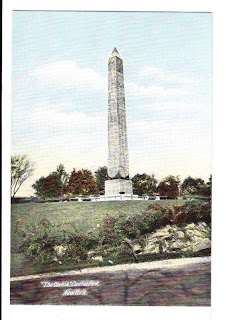 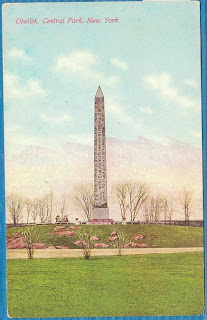 Cleopatra's Needle became a must-see for strollers through Central Park in those Victorian days.  Unhappily, the obelisk no longer enjoys that celebrity.  Visit her now and, while standing before a relic that stood in Egypt during the time of Moses, you will doubtlessly be pretty much alone.  The hieroglyphs in 1880 were crisp and deep.  Sadly, after just over a century exposed to New York weathering, some parts are mostly illegible and in some sections the inscriptions have totally disappeared. 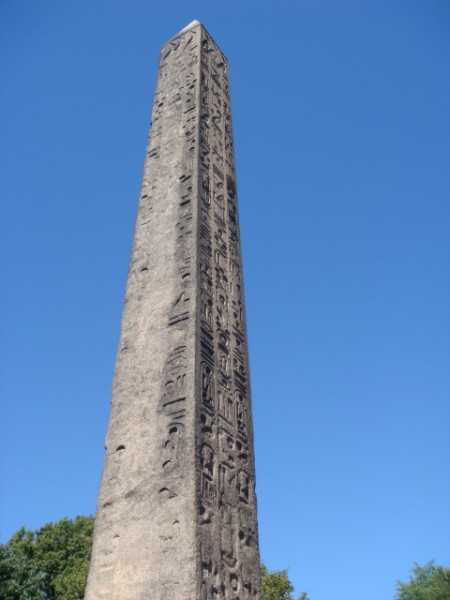 Take a moment to visit Cleopatra's Needle.  Think about its carvers and the history that has passed through its shadow.  It is an awe-inspiring relic far from home.
Posted by Tom Miller at 6:38 AM