The Major-General Worth Monument 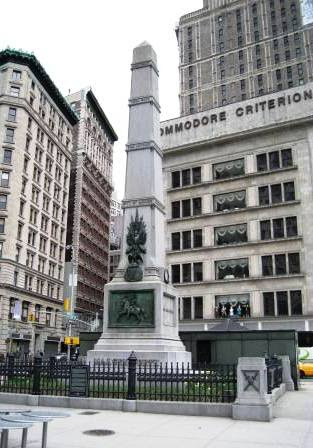 Pass by Worth Square, that little triangle of land formed by the intersection of Broadway, Fifth Avenue and 24th Street, on any sunny afternoon and you will find scores of office workers having lunch and enjoying the outdoors.  Ask any one of them if they realize they are lounging on the grave of General Worth and they will recoil in shock.
Unknown to nearly all New Yorkers and tourists alike, Major General William Jenkins Worth lies under the tall obelisk in the center of busy Manhattan traffic.
Worth was born to Quaker parents in Hudson, New York in 1794.  Despite their pacifist teachings, when the War of 1812 erupted, Worth enlisted in the army.  By 1813 he was promoted to lieutenant.  By the time the war ended he had risen to the rank of major and was appointed commandant of cadets at West Point, even though he never attended the institution.
His meteoric rise continued and by 1838 Worth was colonel of the Eighth Infantry, fighting the Seminole Wars in Florida.  It was Worth who convinced John Spencer, Secretary of War, to allow the Seminoles certain territorial rights, ending the war and permitting the Indians to live in peace.
He went on to fight in the Mexican American War during which he earned the rank of Major General in 1846.  After the war he commanded the army's Department of Texas -- and the outpost where he was stationed was named after him:  Fort Worth.  There on May 17, 1849 he succumed to cholera.
In addition to Fort Worth, the general was honored in the naming of Worth Street in Manhattan; Worth County, Georgia; Lake Worth, Florida; Lake Worth Lagoon, Florida; and Worth, Illinois.
After being temporarily buried in Woodlawn Cemetery in the Bronx, the esteemed soldier, whose writings are still mandatory for West Point cadets, was laid to rest in Worth Square on November 25, 1857.  A grand procession of 6500 soldiers and high-toned speeches marked the ceremony.
Worth's momument was designed by James Goodwin Batterson who kept himself busy with, among other things, the designs for the U.S. Capitol Building, the New York State Capitol and the Library of Congress.  It is a 51-foot high granite obelisk.  Inset on the south side is a bronze relief of Worth in battle, sword drawn, upon his rearing horse.
The heavy cast iron fence around the monument is replete with symbols.  The fence posts are Roman fasces around the base of which are cannon balls.  Each stave of the fence is a replica of the Congressional Sword of Honor Worth received while commanding in Texas.  Each sword is capped by a miniature helmet; swags and tassles connect each hilt and oak leaves and acorns tie them all together. 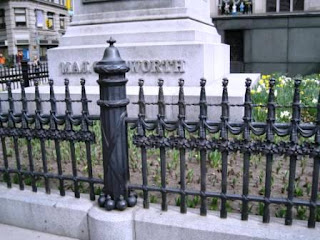 Bands around the obelisk list the general's military campaigns.  On the north side, another inset bronze plaque memorializes him.  Originally the four granite piers at the corners of the fence held ornate lampposts, visible in the period photograph above. 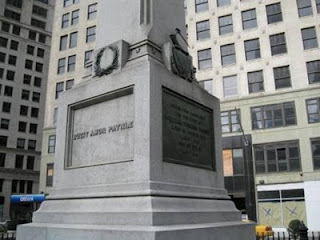 In 1995 a restoration of the monument was underwritten, largely, by U.S. Navy Commander (Ret.) James A. Woodruff, Jr., the general's great-great grandson.  Commander Woodruff's family, through the Municipal Art Society's Adopt-a-Monument Program, endowed the maintenance of the monument and its surrounding planting bed.
The Worth Monument is the second oldest monument in the parks of the City of New York and without a doubt the least known gravesite in the city.
uncredited photographs taken by the author
Posted by Tom Miller at 9:08 AM