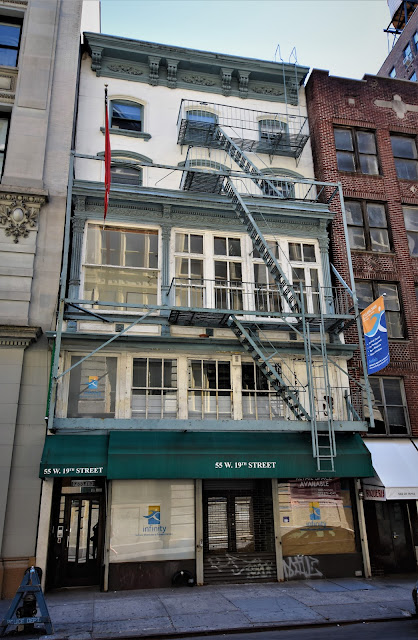 In the decade prior to the Civil War upscale homes were erected along the block of West 19th Street, between Fifth and Sixth Avenues.  One of these was No. 55, built for attorney William Stanley on land he leased from John Jacob Astor.

How long Stanley remained in the house is unclear.  Whoever the occupant was in 1867, he lost a valuable piece of jewelry on the evening of Friday, April 12.  An advertisement in The New York Herald a few days later described "a small gold pendant Chain, with Seal and Key attached."  A reward of $5 was offered for its return; in the neighborhood of $85 today.

It was possibly Joshua J. Henry who lost the chain.  He and his family had taken possession before 1873.  A well-to-do broker, he was also a director of the North American Fire Insurance Company and a trustee in the Atlantic Mutual Insurance Co.  But he was best known for his fiery political opinions.

In October 1859 New Yorkers read newspaper accounts of the attack on the United States arsenal at Harper's Ferry.  Some called John Brown a hero, others a villain.  Joshua J. Henry was among the latter.

Henry was a fervent proponent of slavery and quickly became a force in what The New York Herald, on December 8, 1859, called "The Conservative Movement."  On the previous night Henry had been appointed secretary of the committee "to make preparations for a public demonstration upon the questions now agitating the country, as the result of the 'irrepressible conflict' doctrine preached by [William H.] Seward and his followers and carried into practical effect by Brown at Harper's Ferry."

Henry was highly visible in the heated pre-war political climate.  He presided at the "monster meeting," as described by The New York Herald, on September 17, 1860.  It was preceded by a "brilliant torchlight and pyrotechnic display."  The newspaper estimated the crowd at 30,000.


In his speech he declared that he knew the South far more than Abraham Lincoln.  "I have traveled over more Southern country in one year than ever Mr. Lincoln did in all his life."  He predicted that the election of Lincoln "would be attended with the most serious results to the peace and prosperity of the country; nay, more, would shake the very foundation of this Union."

He blamed Lincoln for the Harper's Ferry raid, saying the Republicans "are loudly clamorous for the abolition of slavery in the South.  They would thus let loose this African host, free to go and, settle where they will."  He told the applauding throng that any candidate was "ten thousand times preferable to Mr. Lincoln."

Following Lincoln's election Joshua P. Henry quietly faded from the spotlight.  He still lived in the 19th Street house with his wife and two sons in 1873 when he was a juror in a sensational murder trial.

William J. Sharkey was born into a family "high in the social scale," according to a contemporary account.   But according to the 1874 book The New York Tombs: Its Secrets and its Mysteries, "he fell at an early age into the companionship of thieves, and seems to have become fascinated with the irregular life of the 'swell mob.'"

On Sunday, September 1, 1872 he entered a Hudson Street saloon where he ran into Robert S. Dunn, alias Bob Isaacs, who owed him $600.  It was a substantial debt, more than $12,000 today.  When Dunn said he did not have the money on him, Sharkey pulled out a single-barrelled pistol and shot him dead.

On June 16, 1873 Joshua Henry sat in the jury box as the well-publicized trial commenced.  The New York Herald described the defendant as "a young man of slender build and of a rather genteel exterior for the class to which he belongs."  The newspaper assumed, given the overwhelming evidence, that "It is not likely that the trial will last more than three days."

But Henry and his peers would not have the opportunity to decide Sharkey's fate.   Another newspaper called Sharkey "somewhat feminine in appearance," and the wily murderer used that to his advantage.  His girlfriend, Maggie Jourdan, visited him in The Tombs with another woman, Wes Allen.   Maggie left, relinquishing her pass, followed about an hour and a half later by another woman in a black coat, her face concealed by a veil.  When Wes Allen tried to leave later, she was detained for not having a pass.

William Sharkey had slipped out disguised as a woman.  He escaped to Cuba and was never found.

Around 1877, following Joshua Henry's death, his widow and sons moved into her parents' home at No. 14 East Tenth Street.  The house was purchased by Charles F. Spang; an investor who lived in Pittsburgh.  It was leased to Eben Peek, a director of the Maritime Association of the Port of New-York.

By now the neighborhood was seeing change.  The mansion owners of Fifth Avenue were slowly moving northward, and Sixth Avenue was becoming a shopping district.  During the winter seasons of 1891 through 1893 No. 55 West 19th Street was leased by actor and dramatist (James) Steele MacKaye and his wife Mary.  Among the couple's children was Emile Benton MacKaye, known as Benton.  He would go on to become a pioneer of land preservation and a renowned forester and conservationist.

In 1892 Alfred J. Cammeyer built his imposing shoe store, called "probably the largest" in the world, around the block at the corner of Sixth Avenue and 20th Street.  Cammeyer was the foremost shoe vendor in New York City.  Only three years later he realized that his monumental shoe store was inadequate.

He leased No. 55 West 19th Street from Spang and commissioned architect and builder Charles Rentz to make substantial renovations.  Rentz striped off the stoop and installed a handsome three-story cast iron commercial front that projected to the property line.  Its fluted Corinthian pilasters and ornate swirling friezes were in line with the grand emporiums lining Sixth Avenues.

When Alfred Cammeyer died in 1909, the exodus of retailers from what became known as The Ladies' Mile was well underway.  Cammeyer's Shoes was among the last, moving to No. 381 Fifth Avenue in 1914.

It was the end of the line for No. 55 West 19th Street as a fashionable store.  It became home to Wiesenthal Trucking Co. which listed its odd dual function as "trucking and hemstitching."  In 1915 the firm employed 5 men and 22 women in the building.

Charles Spang's daughter, Rosalie, who also lived in Pennsylvania, had inherited No. 55 in 1906.  When she sold it to Albert B. Ashforth in September 1919, the New-York Tribune pointed out "For years the building was used as a Nineteenth Street wing to the Cammeyer building...It is the first sale of the property in over forty years."

While light manufacturing continued in the upper floors, Samuel H. Russin operated his florist supply business from the ground floor.  He would remain here for several years, selling baskets, ribbons and other supplies to the nearby retail florists.

His 1920 Christmas season was especially good he told a reporter from the American Florist.  "He had a heavy trade in baskets and preserved stock," an article in the January 1921 issue noted.  The following year the journal reported that he "has returned from a satisfactory business trip to Europe."

By around 1930 No. 55 was home to the Worker-Musicians' Club, a group of Communist musicians.  In 1932 it was renamed the Pierre Degeyter Club, in tribute to the composer of the Soviet National Athem, the "Internationale."   A concert in memory of Degeyter was held here on Friday, January 6, 1932.

In their 2000 book American Folk Music and Left-Wing Politics, authors Richard and JoAnne Reuss note "The Degeyter Club was a catch-all for otherwise unaffiliated radical musicians.  There were divisions for composers, performing artists, and publishers."  Although there were only about two dozen members, some would go on to prominence, including Aaron Copland, Charles Seeger (father of folk singer and activist Pete Seeger), and Henry Cowell.

The Communist-affiliated group remained in the building through the 1930s; replaced by a much less proletariat firm, the Dumont Orchestra Booking Agency.  Among its clients in 1959 was the Wilbur de Paris jazz orchestra.

By 1980 the Jazz Gallery had made No. 55 home.  Concerts and workshops "with musicians of both sexes," according to an announcement in The New York Times on May 30, 1980, were held here.   The Jazz Gallery was in the building at least through 1983. 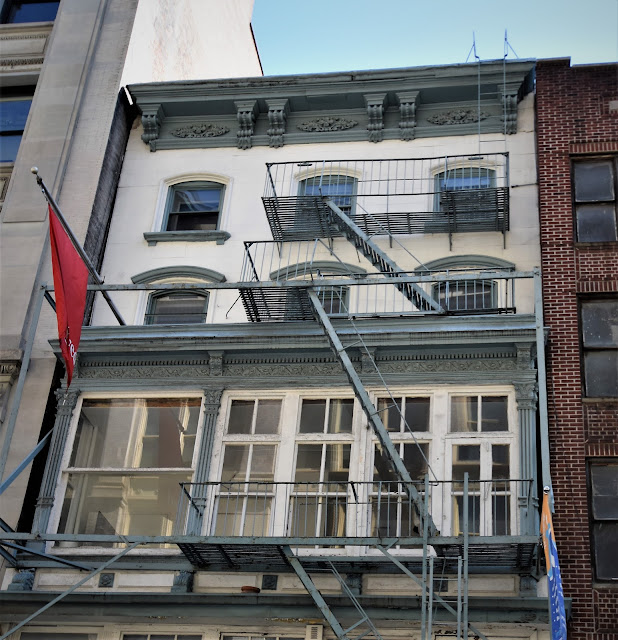 There are five residential units in the upper floors today, while the ground floor is home to a sports medicine rehabilitation center.  Only traces of Charles Rentz's elegant 1895 commercial front survive.  The lower two floors, sitting behind an odd scaffolding-like fire escape, have been brutally abused.   And, despite the painted stone, the fourth and fifth floors retain their 1854 residential appearance.