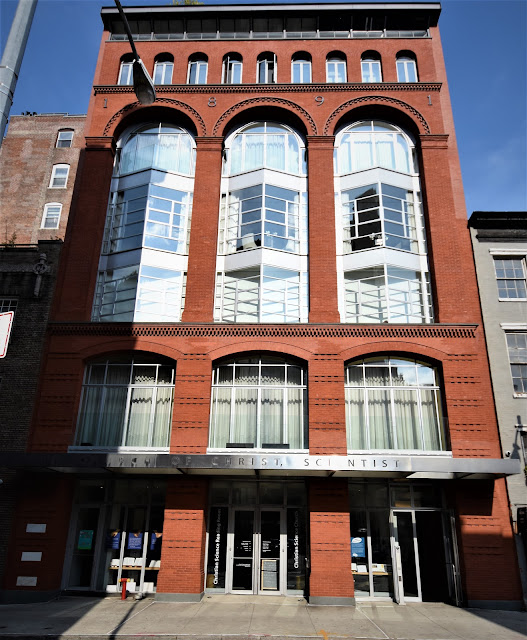 On September 28, 1889 the Real Estate Record & Builders' Guide reported that simultaneously the two side-by-side houses on Macdougal Street had been sold "on private terms"--No. 171 to H. Mandelbaum and No. 173 to N. Cohen.  As was often the case, however, the buyers listed were decoys.  The actual purchaser was Achimedes D. Russell.

The reason behind his subterfuge very well could have been his plan for the properties which sat just feet from fashionable Washington Square to the south and Clinton Place (soon to become West 8th Street) to the north.  Russell was surely aware that the wealthy residents would balk at a printing factory in their midst.

He commissioned the well-known architectural firm of Renwick, Aspinwall and Russell to design the industrial structure.   Construction began in 1890 and was completed the following year.  Faced in pressed Philadelphia brick the $70,000 structure was a handsome commercial take on Romanesque Revival.  Six stories tall, it included two-story elliptical arches within the rusticated base.  A projecting tiled canopy bisected the arches and provided shade and shelter from the elements.  An innovative feature was the angled bays within the three-story arches directly above--creating an interesting juxtaposition of crisp and rounded shapes.  The top floor arcade nestled below a deeply-overhanging cornice.


Russell did not have to search for a tenant.  Before the first brick was laid a lease had been signed with bookbinders Tomkins, McIndoe & Co.  Also in the building was that firm's subsidiary publishing firm, the Caxton Press.

Because the Caxton Press was routinely in the newspapers as new books were released, it was the more visible of the two firms.  Yet employment records clearly indicate that its parent company occupied more space in the building.  In 1895 Caxton Press employed just 21 workers--15 men and 6 women--who worked an average of 59 hours per week.  Tomkins, McIndoe & Co., on the other hand, had a work staff of 131 that same year--40 men, 60 women, and 31 boys and girls.

The book makers filled the entire building for 15 years, until wholesale bottle dealer William Kiene leased the first floor and basement in 1914 and Pattison & Co., Ltd. took the second floor.

The year that William Kiene moved into the building, he joined other German-born businessmen to form the German Relief Fund.  A fund-raising announcement on August 29, 1914 read in part:

Europe is being devastated by war!  Human misery, poverty and starvation will inevitably follow in its wake. Among the nations drawn into the general cataclysm and bearing the brunt of human strife and suffering is Germany, the land of our fathers.  Will you help the wounded?

When America entered the war in 1917 any charitable sentiments citizens may have had for Germany dissolved, and German businesses like William Kiene's were the targets of intense discrimination.  Nevertheless, he endured and was still doing business from the Macdougal Street address as late as 1920.

In 1921 the Tenth Church of Christ, Scientist established itself in Greenwich Village.  In 1927 it purchased the recently vacant Caxton Press building and renovated it as a church.  The congregation would worship in the building for 15 years before it was dedicated.

On June 1, 1942 The New York Times reported "In the presence of 400 persons, the $158,000 church edifice of the Tenth Church of Christ, Scientist...was officially dedicated in a special service yesterday morning."  The article explained that the delay was because "Christian Scientists may not dedicate their church edifices until entirely free of debt."

In 1966 the church embarked on a $600,000 renovation project.  The remodeling by Connecticut-based architect Victor Christ-Janer would not only make over the interiors, but obliterate Renwick, Aspinwall and Russell's striking facade.  Nate White, chairman of the building committee, explained to the press "We are trying to keep God right down on Macdougal Street, where the people are.  The Village kids seem to be searching for an answer.  They come to us when they've been through the marijuana, the L.S.D., and too much sex."

The church felt, apparently, that neither God nor the trouble youth would be comfortable in a Romanesque style building.  "Modernizing the building's facade would not only make the church more attractive to younger people, but would also enhance, rather than detract from the character of the neighborhood," White said.

Renowned architecture critic Ada Louise Huxtable chimed in on the project, saying "no one would question the need for better facilities...But architectural historians, including this writer, regret the loss of the building's late 19th-century facade."  She called it "particularly felicitous...in proportion and detail."

Huxtable added "It seems possible that the Deity might be persuaded to stay behind that interesting historical facade, refurbished and with appropriate interior changes.  The new front promises to be not much better than bleak, compared to the richness of the old one."

Nevertheless, construction went on and the dedication of the renovated, "bleak" structure was held on November 5, 1967.


By 2009 the upper floor had been unused for years.  In an unusual move, the Tenth Church of Christ, Scientist sold the top portion of the building to a developer in order to fund improvements to its facilities.  A subsequent renovation sought to recreate the 1891 facade.  Although most of the architectural elements had been hammered off in 1966, a team of architects from four firms produced a remarkable near recreation--including the striking angled bays.

The project was awarded a Regina Kellerman Award by the Greenwich Village Society for Historic Preservation in 2009.

photographs by the author
Posted by Tom Miller at 1:54 AM