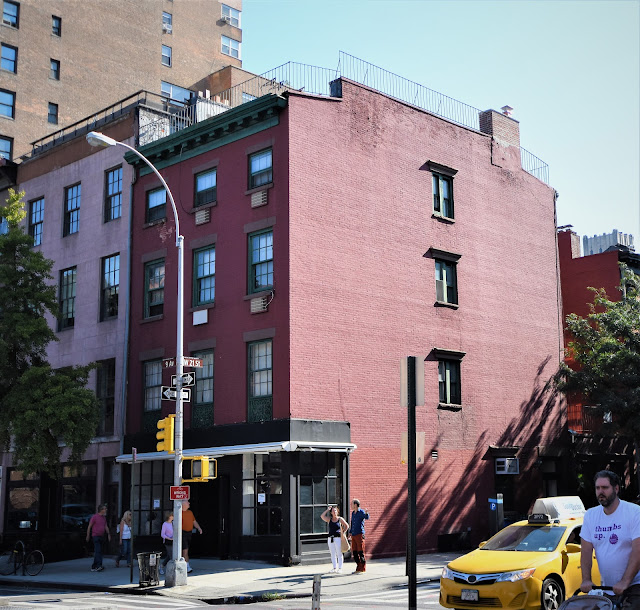 The Chelsea neighborhood saw rapid developing in the 1830s  and '40s.  George Clark joined the trend when he erected a substantial four-story brick house and store on the northeast corner of Ninth Avenue and West 21st Street in 1848.   The Greek Revival-style building was an ample 24 feet wide and stretched back 60 feet along the side street.

It is doubtful that Clark ever lived in the house, erecting it instead as an investment property.  It was home to the Oliver Woodruff family not long after construction was completed.  Woodruff and his wife, Sarah, had three daughters.  Only Olivia was still living at home, her sisters had married brothers Edward and John B. Franks.

Christmas was no doubt a subdued holiday in the Woodruff house in 1854.  Oliver had been suffering a "lingering illness," according to The New York Herald, for some time.  The 65-year old died on December 28 and his funeral was held in the house on the afternoon of New Year's Eve.

Rather surprisingly, mourning did not interfere with plans for Olivia's wedding.  She was married to Joseph H. Greene, Jr. in the Church of the Holy Apostles just four months later on April 13, 1855.

In September 1859 the couple welcomed their third son, Arthur St. Clair Greene.   Tragically, 10 months later the boy died of "congestion of the brain."  It is unclear whether the Joseph and Olivia were living in the Ninth Avenue house with Sarah; but the baby's funeral was held in the house on July 3, 1860.

If the Greenes were, indeed, living in the house they soon left.  The 1861 directories listed only Sarah as living here.  Annually the New York City Directory published a list of addresses of businesses it refused to name--the implication being that they were less than respectable.  The store at 180 Ninth Avenue was included that year.

Sarah had either died in the winter of 1864-65 or the aging widow moved in with one of her daughters.  An auction was held in the house on February 24, 1865 of all the furniture and household items--from the sofas, bedsteads and tables to the glassware and kitchen utensils.

By now many of the expansive Chelsea homes--especially those on the avenues--were being operated as boarding houses.   The new owner of No. 180 Ninth Avenue apparently did not want to go into business as a boarding house proprietress; but she was willing to augment her income.  Her advertisement on July 23, 1865 read "A lady, having a large house, with all the modern improvements, would take a few single gentlemen or gentlemen and their wives to Board."  She tempered her cook's questionable abilities with the breezy site near the river.  "Location for warm weather fine; table unexceptionable."   One of her boarders was young Welden Pell Anderson who was attending Columbia College in 1867 and 1868.

The reason the New York City Directory had refused to list the business here in 1861 may have been explained by an advertisement in The New York Herald on March 23, 1866:

For Sale--The Lease and Fixtures of an old established Bar and Billiard Room, in a good location and doing a fine business.

That the Woodruffs had leased the space to a saloon and poolroom is surprising--especially considering its location diagonally across the avenue from the General Theological Seminary.   But before long a much more respectable business would operate from the store.

Directly across the street was the house of Levi L. Livingston at No. 183 Ninth Avenue.  A remarkable mix of businessman and artist, he was an accomplished "decorative painting" who executed murals in public buildings and upscale homes.  His other business was much less artistic.

Born in Newburg, New York in 1819, he had come to New York City in 1862 and formed a partnership with John Jones as Livingston & Jones.  They leased the space in No. 180, selling paints, varnishes, commercial grade oils, and similar merchandise.

In 1878 Livingston and Jones dissolved their partnership; but Livingston remained in the building.  Although he ran the business alone, he gave it the impressive name of Livingston, Ward & Co.  That year he was subpoenaed to appear in court to give what must have been an uncomfortable testimony.

For years Livingston & Jones had supplied oil to the Meter Company of Samuel Down nearby on Tenth Avenue at 22nd Street.  The factory manufactured gas meters.   Down died in October 1876, but now his will was being questioned.  Those looking to overturn the will insisted he was a drunk and, therefore, incapable of composing a reasonable legal document.

When the defense attorney presented Livingston "to show Down a temperate man," as described in court documents, the opposing lawyer dismissed his credibility, called him "bias, as he is now supplying the factory."

At the turn of the century the store had become the butcher shop of brothers Alphonse and Herman Kirschbaum.   They tested expanding their product offering in 1901 by installing a fruit stand outside.  That apparently did not go well, for there is no evidence that they ever renewed the license.

The Kirschbaums were, quite literally, close brothers.  They lived next door to one another--Alphonse at No. 355 West 118th Street and Herman at No. 357.  The H. & A. Kirschbaum butcher store became a neighborhood fixture and they did business here at least into the 1920s.

The second half of the 20th century would see tremendous change come to the Chelsea neighborhood.  In 1969 Joyce Ostrin and her actor brother Art opened a quirky vintage clothing and novelty shop called Circa Early Halloween at No. 174 Ninth Avenue.  In 1977 they moved the store to No. 180--renaming it Early Halloween.  By then the upper floors had been converted to apartments, two per floor.

Early Halloween was ahead of the Chelsea renaissance.  In 1980 Angela Taylor, writing in her "Discoveries" column in The New York Times noted the changing area.  "Chelsea is a neighborhood of contrasts: lovely old town houses sharing blocks with rundown tenements, Spanish bodegas and brick-walled bistros, cosy neighborhood stores and emporiums as large as Barney's.  It is not the tourist attraction SoHo has become, but it has some interesting and unexpected shops."

Among those was Early Halloween where Taylor found 1920s linen golf knickers and "jazzy socks from the 1940's."   Around Valentine's Day 1984 New York Magazine noted that the store was offering not only eccentric vintage clothing but pricey items like an Edwardian sterling-framed evening purse and a brass mirror, both priced at $150.

The Swedish coffee store, FIKA, leased the store space in 2014 and began renovations.  Amazingly, in March 2015 as the old shop facade was peeled off, Livingston & Jones's signage reemerged after more than 130 years.  Passersby could see it for only a few days before it was, again, covered over with a new storefront. 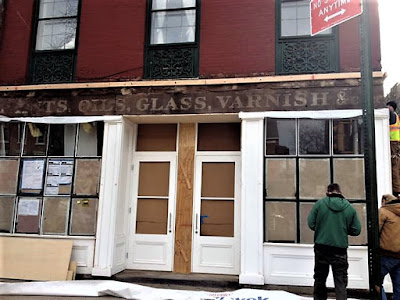 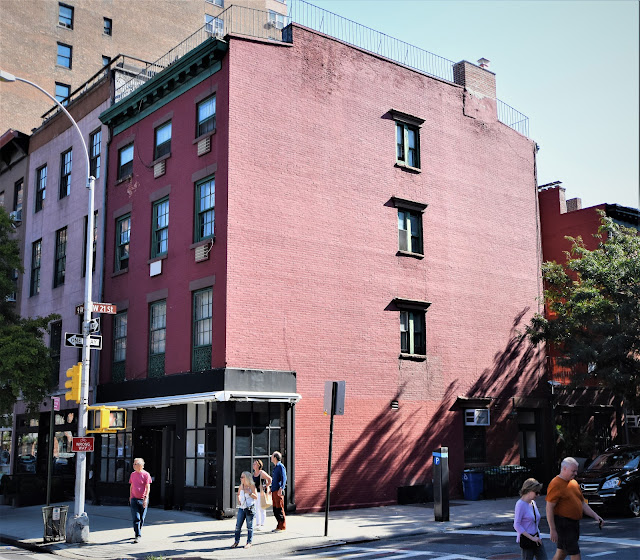 non-credited photographs by the author
many thanks to reader Steven Otero for suggesting this post
Posted by Tom Miller at 3:26 AM