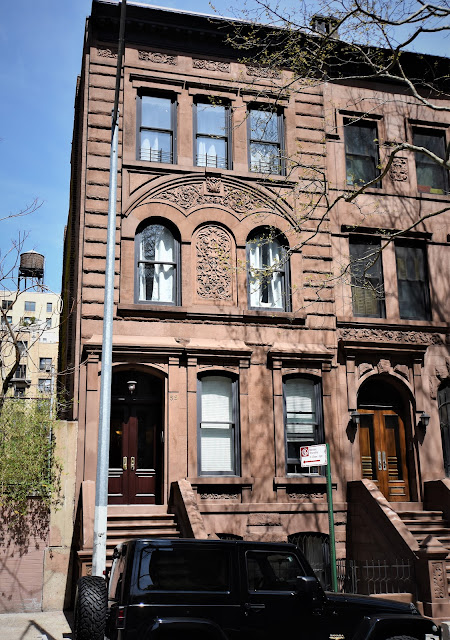 Increase M. Grenell acted both as the developer and the builder for his row of seven comfortable rowhouses on West 94th Street between Central Park West and Columbus Avenue.  He purchased the plots and hired Charles M. Youngs to design the houses in 1890.

Youngs had been working in New York for at least a decade, but he is little known today.  His obscurity is possibly because much of his work, it seems, was in making renovations to existing buildings.  In 1879, for instance, he designed a new cast iron storefront for the building owned by Charles A. Baudouine at No. 42 Walker Street; and the following year he designed a two-story extension at the rear of Charles G. Landon's residence at No. 428 Fifth Avenue.

And so perhaps the 94th Street row would be his crowning work.  He designed each house to stand on its own architecturally, but to compliment its neighbors as a harmonious whole.  Blending prim Renaissance Revival elements with more rugged Romanesque Revival components, he created hybrid designs that were quintessentially 1890s in taste.

Construction was completed early in 1891.  No. 59 perfectly exemplified Youngs's marriage of styles.  The basement level--protected not by the more expected iron fencing but by two low stone walls incised with fans--was faced with thick bands of rough-cut brownstone.  Stone newels with handsome carved Renaissance Revival panels introduced the steep stoop where, too, stone wing walls took the place of iron railings.

The architrave surrounds of the parlor floor windows perfectly matched the framing of the double-doored entrance, and Youngs gave all three openings an unusual concave hood.  The piers flanking the upper two stories alternated between planar stone and undressed bands, creating somewhat the look of newly-laid blocks with their mortar oozing out.  It was at the second story that Youngs let his full creativity loose.

The two-story central section projected a few inches away from the facade, just enough to draw interest.  A wide arch encompassed three smaller arches--two windows and a blind arch overflowing with intricate Renaissance carvings.  Swirling vines with fruits and flowers sprout from the mouth of a smiling mask.   The spandrel directly above echoed the motif with vining leaves and flowers in full bloom.  Its foliate keystone served no purpose other than to be attractive.  The design was carried on in the five small panels just below the cornice. 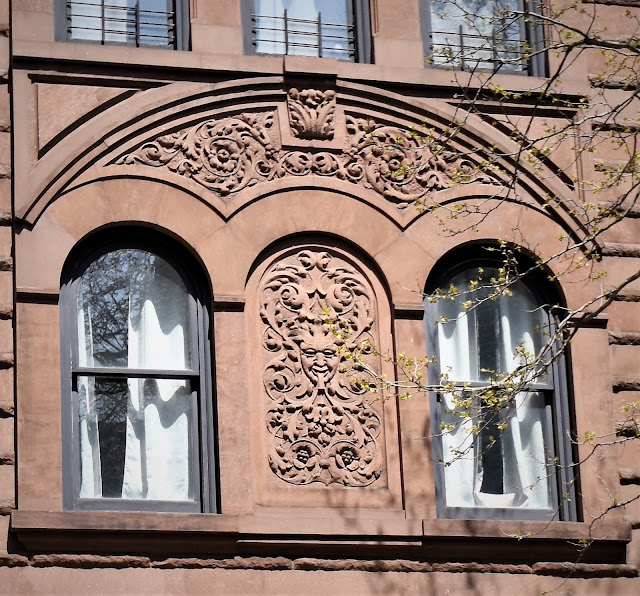 Emmel was doing exceptionally well for himself.  At just 38 years old he was a member of the firm Wattenberg & Emmel, flour merchants, and an officer in the newly-formed New York Hygeia Ice Company, Ltd., which produced and sold "artificial ice" to restaurants and hotels.  He was a member of the Produce Exchange and of the New York Athletic Club.

But the young executive would not enjoy his new home for long.  He died at his country home in Portchester, New York on September 20, 1891, just four months after purchasing the 94th Street house.

The following month Ida A. Emmel sold No. 59 to George F. Mattlage (making a quick profit of $2,000 in the deal).  The 30-year old was a member of the produce wholesaling firm of Charles F. Mattlage & Sons, which did business at No. 337 Greenwich Street.

Mattlage embraced the new Upper West Side neighborhood.  His brother, C. Henry Mattlage, lived in the area, too, at No. 325 West 88th Street and both men were elected members of The West End Association in January 1899.  No mere social club, the The West End Association lobbied for improvements in the district such as gas street lamps and the extension of the rapid transit system.

The brothers' focus would temporarily shift to Texas the following year after Galveston was devastated by a hurricane on September 8, 1900.  The deadliest hurricane in U.S. history, it took between 6,000 and 12,000 lives.

New York City residents responded with an outpouring of money to the relief funds.  And city merchants offered goods to the survivors.  An army transport ship, the McPherson, was loaded with supplies, mostly clothing and shoes.  Charles F. Mattlage & Sons came through with a less expected donation: 1,500 boxes of smoked herring.


In 1903 members of the Merchants' Association gathered to protest the proposed "overhead trolley" on West Street.  They were united in favoring a subway instead.  George F. Mattlage was not there in person; but his letter of protest was read nonetheless.

His absence was due to sickness.  In fact, in 1899, the same year that he joined the West End Association, Mattlage had fallen ill.  Before the end of the year he was no longer able to go to his office.  He died in the 94th Street house in April 1905 at the age of 43.

Mattladge's widow appears to have stayed on in the house until 1915 when, on February 20, the Record & Guide reported on rumors that his estate had sold the house.  And it had.  Emanuel Louis Spellman, who had been living at No. 76 West 119th Street in Harlem, was the purchaser.


Spellman was born in Rotterdam, Holland, on July 24, 1845, and was educated in Europe and Cincinnati, Ohio.  He moved to New York in 1870, the same year he married.   He founded E. L. Spellman & Co., dealing in wine and liquor, described by the California Farmer in 1912 as "one of the largest wine distributing firms in the country."  He was also, by now, a director of the California San Gabriel Mine, and the Federal Distilling Company of Baltimore.  Not forgetting his homeland, he was President of the New Netherland Society.

The Successful American said "Mr. Spellman is noted for his charities, and in distributing his bounties he is discriminating and just."   His donations covered an array of causes.  Following the 1906 San Francisco earthquake and subsequent fire, his company donated $250 in relief--just under $7,000 today.   He was a member of the Hospital for Deformities and Joint Diseases (membership required a $10 per year contribution), and in 1916 he donated to the American Jewish Relief Committee's fund to provide relief to European Jews affected by World War I.

At a time when most wine merchants imported their goods from Europe, Spellman was surprisingly bullish on domestic wines.  In the fall of 1912 the Pacific Rural Press noted that he had "given evidence of his faith in the future of the industry by contracting for 2,500,000 gallons of sweet wine and 1,500,000 gallons of brandy," produced in California.  The article added "He also expected to buy between one and two million gallons of dry wine."  Spellman's faith in California wines was strong enough that he purchased vineyards near Fresno and Los Angeles.

Emanuel Spellman would not live to see Prohibition wipe out the distilleries and wineries of America and ruin distributors.  He died on January 11, 1917 at the age of 73, less than two years after purchasing the 94th Street house.

His widow apparently did well through his real estate holdings in New York and California.  On April 22, 1922 she and her daughter Gladys arrived in Paris for the summer.

By the following year No. 59 West 94th Street was being operated as a rooming house, and in 1938 it was converted to apartments with four per floor and six furnished rooms on the top floor.  A recent renovation in 2012 resulted in a total of seven apartments, no more than two per floor.

No. 59 and its two neighbors are most likely the sole surviving designs in New York City by the obscure Charles M. Youngs.

photographs by the author
Posted by Tom Miller at 12:50 AM