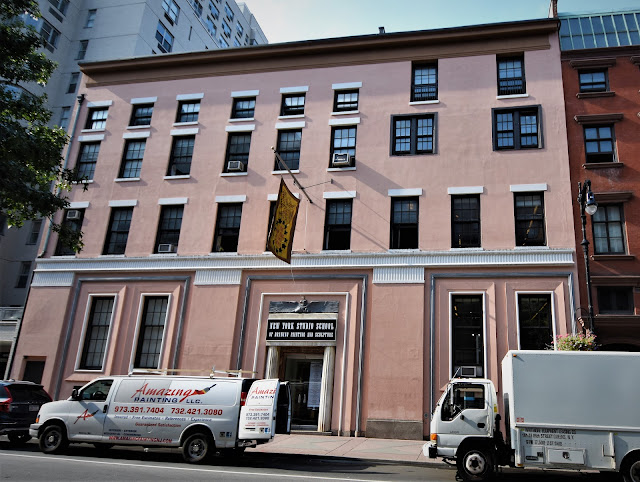 Somewhat surprisingly, at the turn of the last century the three brownstone-fronted houses at Nos. 8, 10 and 12 West 8th Street, built in 1838, were still home to well-to-do residents.  Former Secretary of the Treasury, Charles S. Fairchild, lived at No. 10, for instance, and broker Oscar Edgerton Schmidt lived next door at No. 12.

But despite the aristocratic tone of Washington Square, the immediate neighborhood was changing.  Greenwich Village was the epicenter of Manhattan's artistic community, drawing musicians, poets, writers and artists.

In 1907 Gertrude Vanderbilt Whitney, the wife of millionaire Harry Payne Whitney, purchased and converted No. 8 West 8th Street into the Whitney Studio Gallery.  A respected sculptress herself, Whitney not only used the space as a workshop; but as a means to expose the work of emerging American artists.  She regularly staged exhibitions of fellow painters and sculptors.

At the time Juliana Force was the private secretary to Gertrude's sister-in-law, Helen Hays Whitney.  In 1914 Juliana became Gertrude's private secretary, and her first task was to help organize an art exhibition at the exclusive Colony Club.  Her untrained but exceptional eye for displaying artworks made her an irreplaceable asset to Whitney.  It was a talent that would eventually result in her becoming Director of the Whitney Museum of Art years later.

The operation of the Whitney Studio Gallery was funded entirely by Gertrude.  Included in those costs were the annual cash awards for the painting, sculpture and architecture competitions.  On January 17, 1915 The New York Times reported on the that year's contest, calling the exhibition "very pleasing."  The prize money totaled $1,225 in cash--more than $30,000 today and a welcomed boon to the struggling winners.


On June 22, 1919 The Sun described Gertrude's space.  "Mrs. Harry Payne Whitney's studio at 8 West Eighth street is one of the best examples of efficient planning shown in this type of remodelled buildings, for besides a large studio there are innumerable other rooms  suitable for the many exhibitions of the work of young artists whose interest Mrs. Whitney so generously furthers."

The newspaper noted "The house has a plain but smart facade, with no attempt at extraneous decoration such as has been attempted in those places occupied as homes as well as ateliers."

By the time of that article the gallery had become the Whitney Studio Club.  Gertrude was now focused on presenting the artwork of living American artists to collectors.   Her indisputable ties to high society worked in her favor.


In January 1922 the former Schmidt house, No. 12, was converted for the well-known antiques and art dealers, the Walpole Gallery.  It opened with an exhibition and sale of the colonial furniture of the Douglas Campbell estate.  The items included Hepplewhite, Sheraton and Chippendale pieces.

That shop would be short-lived at No. 12.   In September 1928 Juliana Force convinced Gertrude to disband the Whitney Studio Club (by now it had 400 members) and, instead, establish a museum.  She later told Forbes Watson of The Arts magazine, "When the Whitney Studio Club was organized with twenty members in 1914 there were few galleries where liberal American art was welcome."  But now, she continued, "the attitude of the public has changed.  Art dealers and directors of great official exhibitions have also changed their point of view...The pioneering work for which the club was organized has been done; its aim has been successfully attained."

Working closely with Juliana, Gertrude planned a museum of American art.   Until mid-1930 the intentions had been to house the museum in No. 8; but as The Times reported on October 20 the plans "have developed so far beyond their original scope that the opening will not take place this Fall, as originally planned."

Instead, said the newspaper, "According to the elaborated building program, three buildings, at 8, 10, and 12 West Eighth Street, will be remodeled into one unit, with an appropriate facade."

Gertrude's choice of architects for that appropriate facade was, perhaps, expected.  Her daughter, Flora, was married to George Maccullouch Miller, a partner with Auguste L. Noel in the architectural firm of Noel & Miller.

The architects focused their attention on the ground floor, where they found inspiration in Imperial Rome.  On a background of yellowish pink stucco, reeded frames that resembled fasces outlined the centered entrance and the flanking, paired openings.  Hefty pilasters were capped by fluted capitals which upheld a matching the fluted bandcourse.

Associate architect Bruce Butterfield designed the interiors, and he was also responsible for the impressive doorway.  Fluted marble columns supported a marble entablature that announced the museum's name.  Above was a stylized spread-winged eagle in cast aluminum by Karl Free.  The overall design foreshadowed the architecture that would be taken to heroic proportions by the Nazi and Soviet regimes in the years to come.


Echoing much of what Juliana Force had earlier said, Gertrude Whitney explained to the press why the Whitney Studio Club was no longer necessary.  "There are today hundreds of collectors of American art.  What is needed now is a depot where the public may see fine example of America's artistic production, and it is this need which we hope to fill."

The New York Times described the museum.  "Eleven large exhibition rooms will be arranged to house the museum's collection of more than 400 paintings by American artists, in addition to collections of contemporary sculpture and prints."  The article added that the museum's large collection of Early American paintings was reportedly the only one of its kind. 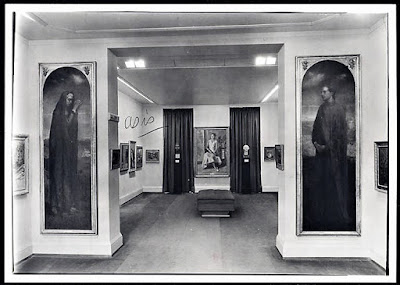 By mid-century the Whitney Museum of American Art had outgrown its West 8th Street galleries.  In 1954 it moved to a building behind the Museum of Modern Art in Midtown. 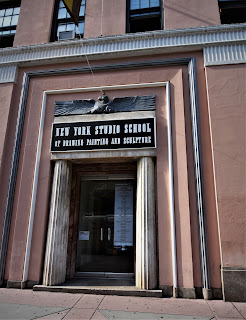 The timing was perfect for the New York Studio School of Drawing, Painting and Sculpture, which was founded in 1964.  The non-profit workshop school had been operating from a loft building at No. 646 Broadway.   The $750,000 purchase price of the former museum building was made possible by a $50,000 contribution from the Rockefeller Brothers Fund following the massive bequest from a former student, Claudia Ann Stone.  She died two days before her 21st birthday and left half of her sizable estate to the school. 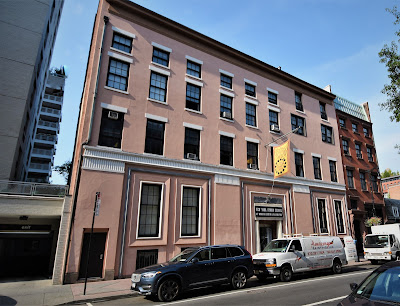 The school moved into the building on May 22, 1967.   In August 2015 a $450,000 restoration project was completed which brought the facade back to its 1931 appearance.  During the work a panel over the doorway reading "National Recreation Association" was removed, exposing the inscribed marble "Whitney Museum of American Art."  For a few days passersby could see the vintage inscription before being covered over again.