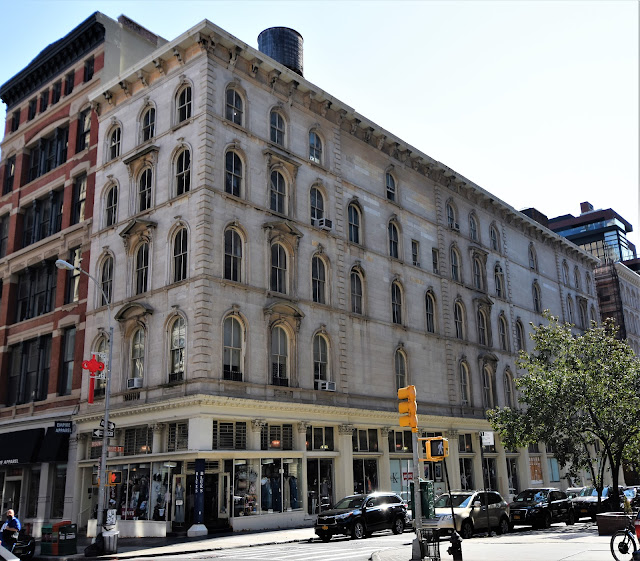 In 1859 financiers Samuel D. Babcock and Matthew Morgan began construction on a handsome commercial structure at the northeast corner of Broadway and White Street.  Completed in 1860, the Italianate style building was elegantly faced in white marble and stretched approximately 71 feet along Broadway and 175 down White Street.

The structure was, in fact, two buildings.  No. 380-382 was separated from 384-386 by a brick firewall--one that would prove its importance later.   Like all Americans, before long the buildings' initial tenants were focused on Civil War.


Dry goods dealers William Seligman & Co. was among "some patriotic merchants," as described by The New York Times on August 17, 1862, that provided "bounties" for soldiers.  The firm offered reward money intended to motivate recruiters to enlist immigrant into The Irish Brigade.

Arms maker Richard P. Bruff was also doing business from the northern building when he received a Government contract to produce Union Army firearms in 1862.   The massive order necessitated his increasing his staff and in January 1863 he hired several new workers, including James McLoughlin.

Almost immediately Bruff noticed shortages.  The New York Times reported on January 28, 1863 that he "has daily missed a quantity of the manufactured arms, and in many instances he missed them after the revolvers had been carefully packed in boxes ready for shipping."  A police officer was assigned "to ferret out the facts" and before long he caught McLoughlin red-handed pawning revolvers.

The unpatriotic thief had avoided suspicion by telling the pawnbrokers that he was a discharged cavalry officer.  More than 30 "costly revolvers" were recovered.

Another tenant filling a Government contract was Hall, Southwick & Co., which was busy making military boots and shoes throughout the war.    It was a lucrative contract and the firm produced more than one million pairs of military footwear a year.

Hall, Southwick & Co. expressed its appreciation two months after the end of the war.  The firm joining other New York merchants in presenting President Andrew Johnson "a coach, span of horses, harness, blankets, &c.," as a "token of their high appreciation of his fidelity to the country," as reported by The Times on May 25, 1865.

Far less bellicose in its business interests was Allen Brothers, who made apparel for the fairer sex.  On February 14, 1864 it advertised "Cloak and Mantilla makers wanted--none but the very best, experienced hands, accustomed to fine work, need apply."  The firm promised "the highest pay and steady work through the season."   It would remain in the northern building for several years.

Dry goods merchant Richard C. Gardner was doing business from the Nos. 380-382 in 1866.  He was bamboozled by a slick-talking Texan in October that year.  Charles Clark entered the shop and informed Gardner that he was the owner of the schooner Dart which was headed to New York from Galveston with 300 bags of wool, 1,700 hides, and 120 bales of cotton worth a total of $45,000.

He explained that he wanted to purchase finished goods to send back to the South on the ship.  He offered to pay one-half cash on the spot and would then pay the balance within four months.  The deal sounded reasonable and Gardner sold him $8,000 worth of goods.  Unbeknownst to him Clark had been telling the same story to several other merchants.  Luckily for Gardner, he had only delivered $175 worth of goods to the Dart before Clark was arrested.

The firm suffered some unflattering publicity in 1875 when it received a shipment of imported silk ties.  The Customs Collector checked the goods and accused John M. Davies & Co. with fraud--saying they were, instead, more expensive silk scarves.

About this time the entire southern building was leased by the dry goods firm Evans, Peake & Co.   Miles E. Jenkins had been employed for 11 years in 1877 when officers of the company "became greatly alarmed, and kept a vigilant watch over their clerks," according to The New York Times.

Interestingly, large companies like Evans, Peake & Co. accepted the fact that employees would steal.  A member of the firm explained to a reporter, 'There was always more or less leakage, and it was always difficult to watch and catch a thief among so many employees."  But now it was excessive.  Within the past few months more than $1,000 worth of goods were missing--nearly $24,000 today.

An undercover detective nabbed Miles E. Jenkins, a man highly active in school and church affairs.  The Times headline read "ANOTHER DOWNFALLEN CLERK...His Exemplary Life in Public Said to have Been a Sham."

Evans, Peake & Co. left 380-382 Broadway on January 1, 1880.  The matching building next door was occupied by three dry goods firms at the time.  On the same day that Evans, Peake & Co. moved out, Hazen, Todds & Co. moved into the first floor and basement of 384-386.  The firm dealt in silks, dress and "fancy dry goods."  Dieckerhoff, Raffloer & Co., dealers in braids and buttons, occupied the second, third and fifth floors; while the fourth was occupied by James Wilde, Jr. & Co. "manufacturing tailors," who, like Hazen Todds & Co., had just moved in.

At around 6:00 on the evening of February 20 fire smoke was seen wafting from the upper windows.  There were 22 men and boys working in Dieckerhoff, Raffloer & Co., one of which told reporters there was just enough time to get the papers locked in the safe.  "All got out safely, even the watch-dog being rescued," reported the Tribune.

Fire fighters quickly arrived but the fire was well under way.  The New-York Tribune noted "The burning building was next to the one at the corner of White-st. and Broadway, and in construction similar to it."  Everyone working in the building managed to get out, J. A. Knapp of Hazen, Todd & Co. saying "It was at the peril of our lives that we did get out."

Several firemen attempted to fight the inferno from the roof.   When the immense safe on the fifth floor plummeted all the way to the basement, it weakened the structure.  The New-York Tribune reported that two companies of fire fighters were on the roof, "but feeling the roof giving way they had been obliged to retreat."  Two members of Hook and Ladder Company No. 1, Thomas J. Dougherty and John F. Cassidy, hesitated.

The St. Paul, Minnesota newspaper the Daily Globe, reported on the horrific results in dramatic Victorian prose.  "The roof gave way suddenly near the center, near where they were standing, and with blanched faces and cries of horror the two doomed firemen fell into the blazing abyss to be consumed."

At around 7:30 the rear wall collapsed.  After than "All hope of saving any part of the burning building was at an end," reported the New-York Tribune.  Thanks to the heavy party wall, the vacant No. 380-382 Broadway was little damaged.

The year of the devastating fire Butler Brothers, "dealers in hosiery and notions," was located at No. 370 Broadway.  Formed by brothers Edward, George and Charles Butler, the firm supplied wholesale merchandise to retailers and was one of the first mail-order companies in the U.S.   After No. 370 Broadway was devastated by fire on January 7, 1882, Butler Brothers moved to No. 380 Broadway.

The employees were given a rare treat on February 7, 1886, the 18th anniversary of Charles H. Butler's wedding.  He invited the staff, about 200 in number, to the celebration at his estate, The Evergreens, at Rahway, New Jersey.  Butler hired a special train to transport the workers from New York to New Jersey, where they found "a caravan of large sleighs" waiting to take them to the mansion.  The New York Times reported "The clerks feel greatly delighted because their employer treated them with as much cordiality as he did his other guests, and made the trip a red-letter day in their lives."

In 1898 Butler Brothers moved into the newly-completed New Era Building at No. 495 Broadway.   Other firms in No. 380-382 now included engravers John Scoles; toys and novelties dealers Spelman Brothers; and the Gilbert Manufacturing Company, wholesale dealers in cotton goods.

Gilbert Manufacturing Company, whose mills in Bainbridge, New York employed about 100 workers, had created a sensation in 1887 as efforts to erect a memorial to General Ulysses S, Grant were under way.  The firm introduced its Grant Memorial Twills--yard goods offered to clothing manufacturers.  Most of the proceeds from the sales went to the Grant Monument Association.

On September 25, 1887 The New York Times reported "Since the offer was made by the corporation it has increased its looms over 200 per cent.  Another mill has just been put into operation, and still it is difficult to supply the demand for the twills."

The turn of the century would see a marked difference in the tenant list.  Manufacturing was essentially gone from the building as offices moved in.  In 1900 there were at least four insurance companies in the building, and in 1902 three express companies--The Pacific Express Co., the U.S. Express Co., and the Western Express Co.--had branches here.   By 1903 insurance firms made up the bulk of the renters, while other offices like that of the Purchasing Paymaster of the Brooklyn Navy Yard took space by 1905.

It was about that time that the Cincinnati-based office furniture makers Globe-Wernicke Co. opened a store in the ground floor and basement.   The company did a brisk business in its domestic bookcases, as well, with its stackable and expandable models that allowed the purchaser to customize the furniture.

In 1916 Globe-Wernicke erected its own building about three blocks to the north at No. 451 Broadway.   No. 380 would continue to be home to, mainly, insurance other professional offices--like the Library Bureau which published reference guides for libraries nationwide in 1928.


During the Depression years Ninto Building Corporation, a real estate development firm, leased space in the building, as did Golding Brothers & Co., cotton converters.  At mid-century Kremer Co., dealers in stationery supplies like typewriter paper, had a full floor; and in the 1960s Defender Industries, Inc. was here, selling marine equipment such as fiberglass tarps, matting and nylon rope. 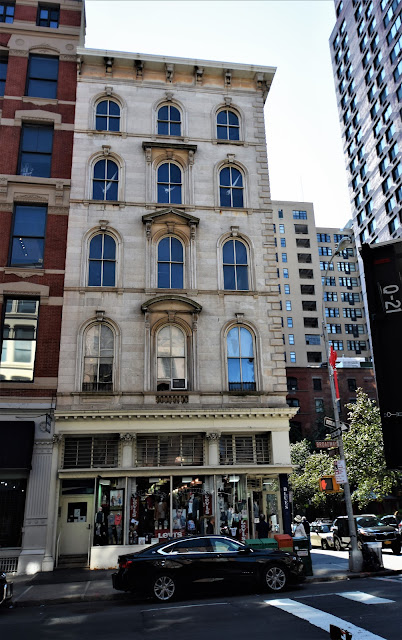 The Tribeca renaissance changed the personality of No. 380 Broadway in 1992 when the Access Theater leased the fourth floor.  It was joined in 2002 by the Manhattan Children's Theater and in 2014 by the Battery Dance Company, which took the fifth floor.

Few passersby would suspect that the handsome marble building is a sliver of its original self.