Henry Martyn Congdon is remembered most for specializing in ecclesiastic architecture.  Before his death in 1922 he designed numerous Episcopal churches across the country.  But the project he took on for developers Edward & A. Abbott in 1879 was purely utilitarian.

In November 1878 the brothers had purchased the five old buildings at the northeast corner of South Fifth Avenue and Prince Street. The structures were two- and three-story frame houses with stores on the ground floor, except for the corner building which was brick.  The Abbotts spent $46,400 for the combined properties--in the neighborhood of $1.15 million today.

Construction got underway on May 15, 1879 and continued at lightning speed.  The sprawling factory building was completed in just over three months, on August 27.  Congdon's red-brick design was a no-nonsense take on Romanesque Revival.  There were none of the medieval inspired carvings or heavy granite blocks found in some loft buildings in the style; instead the restrained design relied on the rhythm of arches and incised lines (hints of the emerging Queen Anne trend) on the brick piers.

In 1892, the year before South Fifth Avenue was renamed West Broadway, a fifth floor was added in the form of a stylish mansard roof.

There were two main tenants in the sprawling structure.  One was John Dougherty, who ran his stained and leaded glass factory here by 1895.  By the last decade of the 19th century stained glass was wildly popular not merely for churches but for residential and civic buildings.  Saloons, restaurants and oyster bars had stained glass panels and heavy leaded glass doors; colored light filtered into residences through stained glass transoms, and grand courthouses and municipal buildings boasted stained glass domes.


The other tenant was the hat factory and salesrooms of M. S. Cornell & Co.   The firm produced "many thousands" of men's hats for Young Bros., which provided the designs.  It specialized in "stiff and silk hats" worn by America's upper crust.   On December 15, 1898 M. S. Cornell & Co. placed an advertisement in The Sun:  "Stiff Hat Trimmers wanted; full work."

The properly-dressed gentleman had a full wardrobe of headwear, each hat dictated by the season and the event.  The hats produced for Young Bros. by M. S. Cornell & Co. included top hats, coach hats--a style of top hat with a curved brim--derbies, and other stiff hats.  ("Stiff hats" distinguished the Cornell-made hats from summer hats like boaters made of straw made by a different manufacturer.)

In August 1902 The American Hatter reported on Young Bros. new "low, square crown derby with wide brim and round curl, which will be known as their 'Special Horse Show Hat.'"  The journal added "the correction of the style is guaranteed, while the fact of its being a product of the factory of M. S. Cornell & Co. vouches for its quality."  A separate article mentioned "The manufacturers, M. S. Cornell & Co., are using the same care in turning out perfect goods that has helped to make Youngs hats popular."


In 1906 esteemed architect George B. Post was working on the designs for the new campus of the College of the City of New York in northern Manhattan.   The cathedral-like Gothic Revival main building, today known as Shepard Hall, included 65-foot stained glass windows.

The popularity of stained glass was apparent in the number of makers who bid on the job.  James Dougherty was one of 11 leaded glass manufacturers to submit bids.   Dougherty's initial $6,300 estimate would be equivalent to $173,000 today.

By now apparel firms had taken space in the building.  In 1900 Gustave Erzig's "cloaks and suits" factory was here, as was S. Nassberg's "art embroidery" shop.   James Dougherty was in the building as late as 1911; but by the end of World War I it was home to apparel manufacturers, like the Sittenfield Leather Company, and small business like the Promotion Sales Company.

The onset of Prohibition on January 17, 1920 was devastating for hundreds of businesses--notably restaurants, hotels, distilleries and breweries--and untold thousands of Americas suddenly were out of work.  But others saw it as an opportunity.

Herba Products Company manufactured flavoring extracts in the West Broadway building and Gramatan Company, made hair tonic in its factory here.  Both products used alcohol as a component.  And the executives of both firms quickly realized there was a greater profit in the ingredient than in the end product.

On July 2, 1920 The Sun reported "Indictments, arrests and sentences all having to do with dealings in liquor came thick and fast yesterday."  The article went on to say "Prison sentences as well as fines were prescribed by Judge Grubb for three officials of the Gramatan Company and the Herba Products Company.  They were convicted last week of selling 25,000 gallons of 190 proof alcohol."

The president of Herba, Henry F. Maresca, received a two-year sentence.  Giavanni Rubino, president of the Gramatan Company, was given a 20-month jail sentence, and his treasurer, Charles d'Angelis, got 15 months.  All three were fined $17,000--more than $200,000 today.

Before mid-century the building continued to house several apparel-related firms like Feingold & Liss, "millinery supplies," here in the early 1920s and the Lincoln Footwear Company.   The latter firm suffered a terrifying robbery in the summer of 1943.

Lillian Greenstein, the company's bookkeeper, was headed back to work from lunch on July 23.  She ran into her boss, Sidney Wasserman in the lobby.  He was returning from the bank with the company's $804 payroll.  When the pair entered the elevator, two men followed them.

Before they reached their fourth-floor offices, the thugs displayed guns and robbed Wasserman of the payroll and took $60 from Greenstein.  It was a significant personal loss for the young woman, more than $800 in today's dollars.

There appear to have been no garment firms in the building by the early 1950s.  Joe End & Co., Inc. was here by 1947 making novelties.  Its plush animals were the type used as prizes in carnivals.  Its 1947 "delicately proportioned" deer were made of "fine delustered plush with sprayed patches and dots." and were available for $45 a dozen.

In 1950 the firm advertised a "Hot Item Sensationally Priced!"  The Rock-A-Bye-Baby was a "giant 21" life size" doll that cried, sucked its thumb, and moved its arms and legs, according to the ad.  It was "costumed in baby's dress with diapers and under-shirt.  Like a new-born infant, she's wrapped in a baby blanket tied with a big bow!"

In 1969 the change in the Soho neighborhood from industry to art was evidenced when the West Broadway building was renovated to accommodate stores on the first floor, a fine art studio on the second, and offices above.  The Hollander-Soho Gallery was operated by photographer Am Hollander.

Subsequent galleries and stores here included the Circle Gallery, here in 1981.  In the mid-1980s the boutique Connections-Nichole Farhi sold "clothes you can't wait to get into." 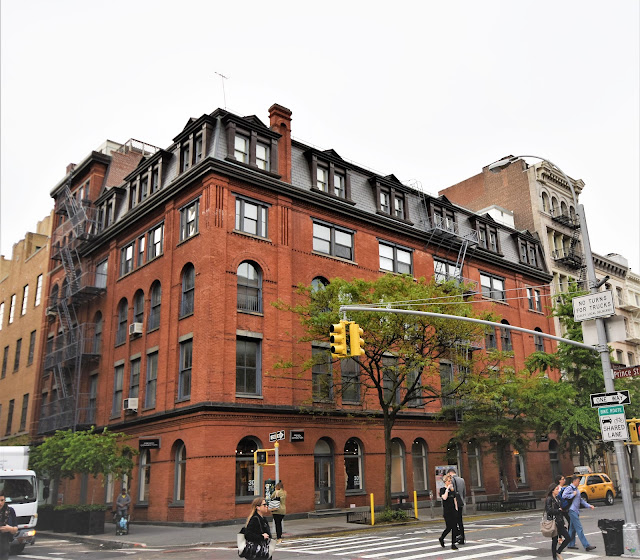 A 2010 renovation resulted in "living-working quarters for artists" on the upper floors.  Henry Congdon's handsome 1879 factory building is a striking reminder of the industrial period along this stretch of West Broadway; when horse-drawn drays rumbled down the dusty streets.