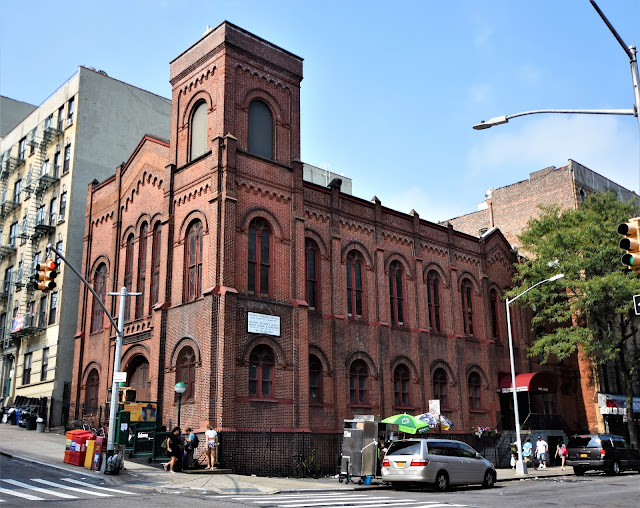 The Methodist minister Christian Blinn came to New York from his native Germany with a wife, a religious passion and a comfortable personal fortune.  In 1874 he recognized the need for a German-language Methodist church "for the accommodation of the German families in the vicinity of East Fiftieth street," as explained by the New York Christian Advocate.

Bishop James of the East German Conference appointed Blinn as pastor of the non-existent congregation and put him in charge of establishing it.  On March 10, 1876 the newspaper announced "After overcoming various difficulties in securing title, Mr. Blinn has purchased a very desirable site for the new church on Fifty-fifth street, east of Second Avenue, at a cost of $15,000 (a low price for the property,) and will immediately erect thereon a neat and commodious house of worship."

The total outlay, including the property, was projected to be $50,000--a little over $1.1 million today.  Blinn announced that he would personally foot the bill as a gift to the Methodist Episcopal Church.

In the meantime another German Methodist preacher was struggling to establish a ministerial school in Brenham, Texas.  Carl A. Urbantke opened his Mission Institute in the German Methodist Church with a class of three students in March 1883.  News of his difficult endeavor reached New York and Blinn contacted Urbantke, promising to pay the salary of an additional instructor and contributed $10,000 toward the construction of a two story school.

In November 1888 Rev. Christian Blinn traveled to Kansas City to attend the conference of the General Missionary Committee.  While there he fell ill.  The Annual Report of the Missionary Society of the Methodist Episcopal Church announced in January 1889 that he "was obliged by illness to remain in his place of entertainment.  He died at Kansas City the day after the adjournment of the committee, November 21 1889."

Almost immediately plans were laid for a church in the upper section of Manhattan named in Blinn's honor.  On November 20, 1891 the newly-organized Blinn Memorial Methodist Episcopal Church paid $17,000 for the empty plot at the southwest corner of Lexington Avenue and 103rd Street.

The land was part of a large tract previously owned by William H. Gebhard.  He placed deed restrictions on the plot, limiting its use to "a Protestant church or a private house."

The trustees were apparently confident in their negotiations because The Sanitary News had reported months earlier, on July 1, that Frank Wennemer had filed plans for the church and parsonage.  "The front will be of long meadow stone and Philadelphia brick."  The Record & Guide added that the cost would be $60,000 and "The church will be Gothic in style."

There was, in fact, little Gothic in the style of the completed structure.  Wennemer had drawn heavily from the German version of Romanesque Revival known as Rundbogenstil.  Hints of Gothic Revival appeared in the terra cotta detailing of the brick eyebrows over the arched openings, and in the engaged granite and terra cotta columns flanking the entrance.  The delicate arched brick corbel tables that outlined the upper facade and the bell tower softened the stern Germanic architecture.

At the time of the building's completion New York City was battling a nefarious problem: white slavery.  Heinous procurers preyed on indigent immigrant girls, snatching them from the streets and forcing them into prostitution.

The Blinn Memorial Methodist Church played a part in bringing down one such ring, headed by "a pickpocket under three or four aliases, the best known of which is that of Slimy Jake," according to The Sun on February 15, 1894.  Working with him was Nellie Martin.

The newspaper began its account saying "Josephine Thompson and Gertrude Franklin of Yonkers are back home now in the care of their parents, and ready to bear witness when the time comes against those who enticed them away."   When Josephine was just 12 years old she had worked at the Smith Carpet Works with Nellie Martin, then named Maginnis.  Following her marriage in 1889 Nellie resigned; but kept in touch with the girl by letters.

Josephine and her mother were surprised when Nellie Martin showed up at their flat two years later.   She invited Josephine to come downtown to live with her for "a little while."  Josephine later explained "I was only 13 at the time, and knew nothing of the world, and mother knew little more but we thought that it would be a good chance for me to see the city, so mother consented."  The girl's mother would not be able to find her for two years.

Josephine tried to write to her mother, but her letters were always intercepted.  Men came and went and the teen was, as described by The Sun, "plunged into immorality."


Nellie took Josephine to the home of Gertrude Franklin around February 1, 1894.  Gertrude was 17 years old and had been a friend of Josephine.  Nellie told the girl's mother that she and Josephine both worked as servants in a "good house" and could get Gertrude a job there.  Because everything seemed legitimate, Mrs. Franklin consented.

Once at Martin's 23rd Street flat Gertrude quickly realized her plight.  George Harrison, who also lived there, "betrayed" the girl.  But the sleazy trio had picked a feisty victim in Gertrude Franklin.  She was ill-educated and impoverished, but her mother had instilled strict Victorian moral values in her.

She told investigators that two weeks later they had not broken her spirit.   "I cried and threatened...I gave him no peace and kept taking on so that Tuesday he told me to get dressed.  Then they took me around the city for five or six hours, thinking to tire me out."

She saw her chance when they came to the corner of Lexington Avenue and 103rd Street.  She broke away from her captors and into the Blinn Memorial Church.  She refused to leave before Harrison married her.  "I had to tell the minister I was 20 years old before he would marry us," she said.

Gertrude later explained that "although I hate him" she was happy she married Harrison.  "I have got my certificate."  The 17-year old knew that without proof of marriage a girl who had lost her virginity had no hope of a later respectable marriage.

With her marriage certificate in hand, Gertrude stole money from Harrison's pocket in the night and fled.  Two weeks after her abduction, she appeared in court.  The Sun reported "She is a delicate girl, and she bore evidence in her appearance of the life she had led the past two weeks."

Her bravery resulted in the rescue of Josephine and the arrest of Slimy Jake and Nellie Martin.  George Harrison was still on the run when the case began.

After the outbreak of the Spanish-American War in 1898, Clara Barton headed to Cuba with 22 nurses, five cooks and two sea vessels loaded with supplies "sufficient for five or six months' use, and a complete equipment for a field hospital of 125 beds," as reported in The New York Times on August 5.  The congregation of the Blinn Memorial Church did its small part, donating $10 to the cause; about $300 today.

Like most churches in the city, Blinn Memorial arranged outings and activities for its members and children.  On May Day 1914 children filled Central Park, but according to The Times, "Perhaps the largest crowd of children" was from Blinn Memorial Church.  They marched from the church to the 99th Street entrance.  "German and American flags led the procession."  The newspaper noted that while popcorn and taffy vendors did a brisk business elsewhere in the park, vendors targeted their German customers here.  "A pretzel vendor stationed himself at the entrance through which the Germans passed and grinned delightedly at his sales for the day."

A gruesome incident occurred two months later.  The first years of the 20th century were marked by terrorist attacks by anarchist groups.  An unintentional, related explosion occurred in the tenement building at No. 1622 Lexington Avenue, next door to the church, on July 4.

"Mike" Murphy was a member of the radical Industrial Workers of the World.  He had just arrived in New York and was staying in a three-room apartment on the top floor of the building.   He and the socialist revolutionaries who lived there set up a bomb factory.  The intended target was the Tarrytown, New York home of John D. Rockefeller.  But it all went very wrong when a massive explosion blew the entire facade of the building away.

Four were killed and seven injured in the blast.  The New York Times reported "Murphy was in the apartment at the time, and was blown, through wreckage and debris, a distance of two floors down."  Half clothed, he escaped.

The church bore gruesome witness to the carnage.  "On the roof of the Blinn Memorial Evangelical Lutheran Church...portions of a human body were found. These may be fragments of Charles Berg, the only other I.W.W. agitator known to have been in the apartment who has not been accounted for."

The newspaper reported that, miraculously, "its walls touching those of the house in which the explosion occurred, is the Blinn Memorial Church, the only building in the immediate neighborhood that was not appreciably damaged."

On January 13, 1927 newspapers announced that the church's trustees had petitioned the Supreme Court to remove the deed restrictions.  The Times reported "The petition discloses that the church wants to sell its property and establish itself elsewhere."  The church argued that the neighborhood was now filled mostly with commercial and tenement buildings and "is no longer desirable for a private dwelling."  Its attorney said "because of the change in the character of the neighborhood the congregation now is exceedingly small."

The community room, accessed through No. 140 East 103rd Street, was severely damaged by a fire on March 12, 1946.  Responding firefighters battled the blaze for an hour before it was brought under control. 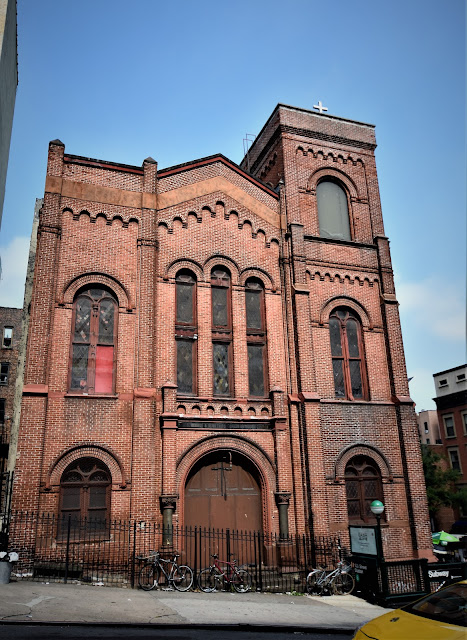 The result was the relocation of the main entrance to 103rd Street, and dazzling interiors.  New stained glass windows were installed, and artist Constantine Yousis, an expert in Byzantine-style iconography, decorated the walls.

St. George and St. Demetrios Greek Orthodox Church still calls the church home.  Sadly many of the stained glass panels are either broken or completely missing, the cap of the bell tower is gone and its openings are boarded up--giving the handsome structure a look of abandonment.

photographs by the author
Posted by Tom Miller at 3:30 AM