According to the New Amsterdam Gazette in 1883, a "Hollander named Geisenheimer" captained his small ship to New York City in 1731.   After safely crossing the ocean, he met calamity in what later became known as Kips Bay when his vessel hit a rock "near the mouth of the Stuyvesant Creek."  The Gazette said "The pious Hollander saw the hand of Providence in the disaster.  He and his crew hauled the shattered timbers of his bark to the head of the creek and built a hut."

The term "hut" is questionable.  Sitting at what is today Sixth Avenue and 27th Street, the Dutch house sat unperturbed until just before the Revolution.  Isaac Varian purchased the land and had the house transformed into one of the elegant country estates that dotted the area.  The Georgian-style clapboard manse featured a stone basement level above which an elegant entrance and fanlight sat within a columned portico.

By 1815 Sixth Avenue had been extended this far north, but it ran directly behind the house.  So the building was carefully raised on logs and turned around to face the roadway.  The ambitious project included the enlarging of the former country house.

Ten years later it was converted to a roadside inn, the Knickerbocker Cottage.  It was taken over in 1850 by Samuel Rockenburg.  He would not run the inn long.  On March 10, 1856 he died "of a lingering and painful illness" according to his obituary, at the age of 53.  "His funeral will take place from his late residence, Knickerbocker Cottage, No. 456 6th-av."  (The address would be changed in 1925 to No. 792.)

The Knickerbocker Cottage was purchased by Peter Connor.  In 1861 he was adding to his staff.  On November 28 an advertisement in The New York Herald read "Boy Wanted--To tend bar and open oysters.  One who understands his business."  And a few days later another ad sought "A young man, as assistant barkeeper."

Conner sold the business in 1863 to Felix Astoin, who leased the proprietorship to Captain William Fowler and Captain Boyle, veterans of the Civil War.  The New Amsterdam Gazette reported that the two captains "took the cottage in their hospitable hands.  They rejuvenated the ancient structure, but conscientiously spared its old front, its massive oak timbers, and its antique rafters."

After Boyle retired, William Fowler continued to lease the property and brought in his son, William, Jr., and then son Rufus to co-manage the inn.  The Knickerbocker Cottage was a favorite gathering spot for political and social groups.  On April 12, 1867, for instance, The New York Herald reported "Yesterday being the anniversary of the birthday of Henry Clay, [the Henry Clay Festival Association] held its annual reunion at Knickerbocker Cottage."

In 1868 journalist Bill Curtis and Civil War veteran Henry Buermeyer rented a room on Sixth Avenue at 14th Street and formed what today would be called a local gym.  Equipped with Indian clubs, dumbbells, and other Victorian equipment, their facility was intended to improve "feats of strength and pugilistic aptitude."  Later that summer they placed an advertisement in the New York newspapers inviting "sports-minded young men" to a meeting at the Knickerbocker Cottage to discuss forming a sports club.

The fourteen young men who showed up on September 8, 1868 founded the New York Athletic Club.  In his 1891 autobiography, John Richard Judd remembered "On this night they organized and called the club the N. Y. A. C., and I believe we each put in $10, though my $10 was handed back to me again because I was a professional."

Despite occasional affrays among the all-male patrons, the events in the Knickerbocker Cottage were generally peaceful.  In 1870 a group of Masons met regularly for lunch here at a special table on the second floor.  Two within the group were actor William J. Florence, known as Billy and Dr. Walter M. Fleming.  Based on Florence's familiarity with Arabian costumes and customs, and Fleming's knowledge of fraternal ritual, they organized the Ancient Arabic Order of the Nobles of the Mystic Shrine.

The first meeting of the Mecca Shriners--the first chapter established in the United States--was held in the Knickerbocker Cottage on September 26, 1872.  What had been a luncheon group quickly grew.  On November 24, 1873 The New York Herald reported "On Saturday evening a 'conventicle' of the Monks was called in the usual form, and they assembled accordingly at the 'Monastery of the North,' in Knickerbocker Cottage, Sixth avenue."  The group was conducting the funeral of Civil War General Ryan.

Another out-of-the-ordinary club organized here was The Manhattan Turtle Club.  Founded in 1870, its rules were entirely gastronomic and its members portly.  On December 12, 1879 The New York Times explained "It is said that the average weight of the 100 [members] is 314 pounds before meals, and that one of the rules of the club is that no man can become a voter in it until he measures at least 49 inches around the waist."

The election of officers was unique.  "The highest office is always awarded to the member who can walk steadily around the dining-room four consecutive times without assistance after eating the greatest number of plates of soup at the dinner preceding the annual election."

During the election process in 1879 Billy Birch, a minstrel entertainer, "stopped eating suddenly when half-way through his twenty-eighth plate" of turtle soup.  He was carried from the dining room choking.  The other candidates continued eating until finally Benjamin Gregory, proprietor of the Adirondack Iron Works, was elected after consuming 37 plates of soup.

Now that the officers were elected, the members turned their attention to Billy Birch.  The doctor reported he was improving "and said that there had been nothing the matter with him except that, in his inordinate ambition, he had eaten his soup in too large mouthfuls, using a ladle instead of a spoon, in which business he had taken down a large napkin with a knot tied in the middle of it, which became lodged in his throat."  The physician said that it "interfered with his appetite."

A similar club was the Five-Pounders which met here monthly.  In 1893 The Times remembered "They feasted at the old Knickerbocker Cottage in Sixth Avenue, whose host Capt. William Fowler, was one of the best livers in the land.  Before sitting at table each month every man was weighed, and he was not suffered to leave the room, no matter how late the hour, until he actually weighed five pounds more than when he entered the dining room."  By the time of the article, the club was no more.  The article ended saying "Both member and guests grew so fat that the disbanding of the Five-Pounders became a matter of necessity."

Another club in which William Fowler was personally involved was The Thirteen Club.  It was organized on January 13, 1882 with 13 members "to combat the popular superstitions attached to that number."  It held its annual dinner in room 13 in the Knickerbocker Cottage every January 13.

The New-York Tribune reported on the 1883 dinner saying "The menu was a coffin-shaped card with a border of thirteen nails, and contained thirteen courses."  By now the membership had greatly increased from the original 13 to 169--not coincidentally the product of 13 x 13.  Speeches during the dinner were limited to 13 minutes each.

When Fowler died suddenly 15 years later, on July 6, 1897, The New York Times mentioned "In his time, to the cottage every New Yorker of note and many men of National prominence came, to partake of its famous dinners and suppers.  Ex-President Arthur was a frequent visitor, as were James Fisk, William Travers Samuel Ward, Lawrence Jerome, Lester Wallack, the younger, and a whole host of the wits and bon vivants of those days."

In the meantime, William Wilson sold the Cottage at auction on March 18, 1885.  Newspapers noted "The reasons for the sale of the property were not stated" and The Times added "The Knickerbocker Cottage was built piece-meal in the early part of the present century." The newspaper got its facts slightly wrong, saying "More than 150 years ago the land on which the cottage stands was owned by the Varian family, one of whom was Mayor of New-York."


Since 1857 Henri and Louis Mouquin had operated a stylish French restaurant downtown known as Chez Mouquin.  In 1898 they leased the old Knickerbocker Cottage and rechristened it Mouquin's Cafe de Bordeaux.

After closing for remodeling in 1899 they reopened in 1900 now welcoming female patronage.  An advertisement announced "Ladies' Restaurant--Mouquin has just opened the Old Knickerbocker Cottage at 454, 456 and 458 Sixth Avenue, foot of Twenty-eighth Street elevated station, as a first-class restaurant." 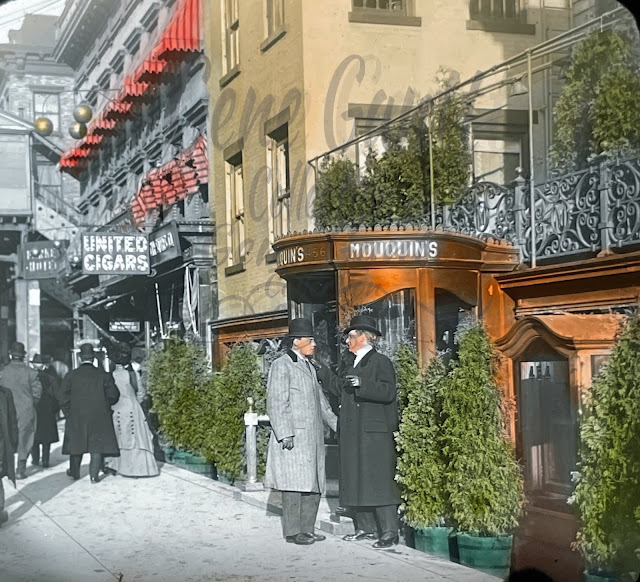 Well-dress patrons pause outside of Mouquin's around 1901.  image courtesy of Gene Gantt

The fashionable restaurant became the regular meeting place of a group of painters of the Ashcan School of art.  William J. Glackens had been a frequenter of Mouquin's for years and in 1904 he and his wife Edith Dimock; John Sloane, Robert Henri and their wives began meeting almost nightly.  According to Bernard B. Perlman in his 1979 Painters of the Ashcan School: The Immortal Eight, "Often they were joined by George Luks, Jimmy and May Preston, or Frederick Gruger, all of the old Philadelphia gang."  The group was enlarged with artists like Ernest Lawson and Everett Shinn.

Mouquin's became a subject of at least three paintings by artists of the famed group.


On December 20, 1908 the New-York Tribune reported on a somewhat shocking transaction--"the sale of the site occupied by Mouquin's restaurant."  John F. Lambias purchased it for $300,000.  The newspaper noted "The property is a landmark," adding "the building on the site is the original Varian mansion, one of the oldest and most historic buildings in the neighborhood."


Mouquin's continued to run its fashionable French restaurant.  Things looked bleak in April 1919 when The Evening World announced that the building faced foreclosure and Mouquin's, "for two decades one of the most famous restaurants in the tenderloin, is to close its doors within a few weeks."  When interviewed, Louis Mouquin shed a tear and sighed "Life is just one damned funeral after another."

But the restaurant earned a reprieve and continued for another five years.   It was not foreclosure, but Prohibition that ended Mouquin's.  The New York Times reported "With the advent of prohibition the lustre of the restaurant began to fade."  Then, when agents found alcohol being sold, it was padlocked by order of U.S. Attorney Emory R. Buckner in May 1924.

Prohibition was not only the ruin of many hotels and restaurants, but of human lives as well.  Such was the case with the closing of Mouquin's.  Alexander Chaput had been a waiter there for 20 years.  He went home one evening and committed suicide by inhaling lighting gas.

Strikingly similar was the case of Armand Francois De Lysle, who had been a Mouquin's waiter for 25 years.  His wife had been in charge of the female employees.   Now they were both out of work and after nearly a year of searching the 59-year old De Lysle feared they would never again find jobs.

When his wife returned home around 7:30 on the evening of March 25, 1925 she found him unconscious from gas escaping from open burners of the kitchen range.  The Times reported "He died in spite of efforts to resuscitate him."

In October that year the Clay Trading Corporation leased the building for a "quick service" restaurant.  But it was too late for the building universally deemed a landmark and "historic."  It was razed within months.  The replacement building survived until 1999, demolished for the 37-floor apartment building The Capitol at Chelsea, which opened in 2001.

LaptrinhX.com has no authorization to reuse the content of this blog
Posted by Tom Miller at 2:45 AM