Sitting on land owned by Trinity Church, the brick faced homes lining the eastern side of Greenwich Street between Debrosses and Watts Streets were the last word in elegant design.  Completed in 1820, three years later The Evening Post mentioned that they "are finished in a neat modern style, with circular front rooms."

Shortly after the end of the Civil War, however, wealthy families moved away after the Hudson River Railroad Company replaced the nearby St. John's Park with rail yards and a freight terminal.  By 1880 the house at No. 469 Greenwich Street was being used by Lawrence Bowe as a junk store.

Henry Welsh had entered the wholesale grocery business in 1859, later relocating to Franklin Street.  By 1872 when he leased the Greenwich Street block front from Trinity Church, he was focusing on real estate development.  His agreement demanded that he would erect a commercial structure at least four stories tall within two years.  He missed that deadline.  But on May 17, 1884  The Real Estate Record & Builders' Guide reported that the old buildings were being torn down and that Welsh "will erect six six-story and basement store buildings on Greenwich street, extending from Debrosses to Watts street, and including both corners."

Welsh had hired architect George W. DaCunha to design the buildings.  Extra care was taken to ensure they were as fireproof as possible.  "They will all have double floors with asbestos paper between," said The Guide.  The cost of the six structures was estimated at $180,000--more than $4.5 million in today's dollars.

The six buildings--pretending to be one--were completed the following year.  Faced in Philadelphia brick, DaCunha placed banded stone pilasters at street level which morphed into four-story brick piers in the middle section.  Stone and brick bandcourses relieved the visual weight of the massive building and in innovative brick corbel table introduced the cornice.


Henry Welsh was his own tenant, moving his real estate business into No. 465.  A manufacturer of metal goods was doing business in No. 463 by summer 1885.  On June 23 it placed an advertisement seeking "solderers on lard pails."  Other early tenants were the New York Electrical Repair Co. in No. 465 and D. Buchner & Co., tobacco merchants, at 467.

By 1896 the New York Electrical Repair Co. had been renamed the A. U. Warren Electrical Repair Works and was the major tenant in No. 465, occupying the first, fourth, fifth and sixth floors and employing about 30 men.  The second floor was home to the California Distilling Works, which made "flavors" and employed just three men.  Also in the building was Plant Bros., makers of buckles.

The structure was filled with workers on the afternoon of August 11, 1896 when an explosion occurred on the first floor.   Despite George W. DaCunha's preventative measures, the fire quickly spread upwards.   By 3:00 the blaze had grown to a four-alarm inferno, spreading to No. 467, occupied by distillers, candy factories and an umbrella manufacturer.

The rapid spread of the fire cut off the escape of scores of workers.  The gruesome scene was repeated in newspapers nationwide.  The Salt Lake Herald, on August 12, reported "The firemen who first reached the scene of the conflagration say they saw a number of men at the windows appealing for help, but before any attempt at rescue could be made they fell back exhausted by the heat and smoke and all are supposed to have perished in the flames."

Other workers in nearby factories watched in horror.  "One young girl, it was said, was seen to approach one of the windows in the burning structure.  Before aid could reach her she had fallen back into the seething mass of flames waiting to swallow her up."  The Salt Lake Herald wrote "From stories told by those who claimed to have been near by when the first alarm was given faces were seen at nearly every window."

William Gray and James Muller, both workers of the Warren firm, made it to a fire escape, but were trapped and burned to death.  Their "charred bodies" remained there for hours while firefighters battled the blaze.  It took nine hours and ten minutes for 21 engine companies and 6 hook and ladder companies to get the fire under control.   Four workers were dead and at least nine others were severely burned, taken to the nearby Hudson Street Hospital.


While repairing the more than $62,000 in damages Welsh combined the six buildings internally by installing "double iron doors."  The arrangement enabled him to lease to larger manufacturers.  The Crown Cordial and Extract Company took the first through fourth floors; Dexter-Frank Caramel Company leased the fifth; and cork manufacturer Alfred H. Frankel took the top floor.

But breaking through the party walls also reversed DaCunha's fire containment design.   On October 9, 1899 fire broke out on the fifth floor.  Although two alarms were sent in, this fire was quickly extinguished.  Nevertheless The New York Times said the building was "heavily damaged" and Fire Chief Edward F. Croker placed the loses at between $30,000 and $40,000--as much as $1.2 million today.

The newspaper reminded its readers "On Aug. 11, 1895, four persons were burned to death and many others permanently crippled in this building."

Both the Frankel and Dexter-Frank Caramel Company stayed on.  The employees in both firms endured long work hours.  In 1900 Dexter-Frank employed 20 men, 40 women, and two girls under 16 years old, each working between 54 and 57 hours per week.  A. H. Frankel employees (15 men and 18 women) worked 59 hours every week.

It appears that the internal doors were bricked closed again.  In 1901 a variety of firms leased space, all once again using the separate addresses.  Among them were the Acme Ball Bearing Castor Co. at No. 463.  The I. S. Van Loan Co. manufactured motors, dynamos, engines and boilers in No. 465 and had its offices in No. 465.  Also in 465 were the United States Candy Co., and the Eurkea Spring Co. and Henry Welsh's offices.

By 1906 Scrubb & Co. Ltd. was manufacturing its "delightful preparation" of mollient ammonia here.  The firm promised that it was "used by all the Royalties of Europe" and said it was not only refreshing when poured into one's bath, but that it "removes stains and grease spots from clothing, allays the irritation caused by mosquito bites, [is] unexcelled for cleansing the finger nails, restores the color to carpets, and cleans plate and jewelry."  The firm's advertisement insisted that the same product that could remove grease stains was "refreshing as a Turkish Bath" and was "So vivifying after Motoring and other sports."

The top two floors of No. 465 were occupied by the Eureka Extract Company and the New York Carbon Company at the time.  Both businesses were gutted by a fire that broke out on January 16, 1907.   The frigid weather made the job more difficult, prompting The New York Times to describe "With coats and hats coated with ice, firemen of eleven engine companies had a stubborn battle last night with flames which destroyed the upper floors of the building at 465 Greenwich Street."

One again the building was repaired and once again it was damaged by fire.  On May 18, 1914 a blaze erupted in No. 463 just after 11:00 at night.  The fire was not contained until 1:00 in the morning, by which time the building was gutted and Nos. 465 and 467 were heavily damaged.  One fire fighter died after falling from the roof.

Columbia Refinishing Company had moved into a loft at No. 465 in 1910 and its many solvents, varnishes and paints no doubt contributed to the suffocating fumes that filled the cars of the elevated railroad on Greenwich Street.  The train was stopped just feet short of the Debrosses Street Station.  The passengers were unable to leave the train for about half an hour, The Times reporting that the 30 men and 35 women "were compelled to breathe the smoke heavily charged with chemicals."  Ten of the women passengers were "exhausted by the smoke" and had to be carried off the train by policemen.

Through it all Henry Welsh's real estate business remained in the building, by now run by his son, Henry Bradshaw Welsh.  In 1915 the younger Henry would problems other that fire on his mind.

He had married Malvinia Elizabeth Beck in January 1897.  Their fashionable Grace Church wedding was followed by a reception in the Waldorf Hotel.  The couple steamed away for their honeymoon in Florida on Welsh's yacht.  In 1915 they had two children, 16-year old Helen and 17-year old Henry.

But Welsh's wandering eye had not only gotten him into trouble but into the courts.  On June 19, 1915 Malvinia sued for separation, alleging her husband had "abandoned her and her children."  For good measure, she filed an action to recover the $1,700 she said she loaned him on January, 1, 1898.

In the meantime, he was sued for $50,000 (nearly $1.25 million today) by Archibald Hamilton Whan.  Whan was an efficiency expert and a tenant of Welsh in New Rochelle, New York.  His wife, Edna Vanderpoel Whan, had sued for separation from him.  The tangle of litigation all centered on to Henry Welsh's romantic dalliances.

Whan told the court he left his wife "because she insisted on receiving the attentions to Welsh after he had entrusted her to have nothing to do with him."  His suit against Welsh was for alienating his wife's affections.

P.  Keller & Co. occupied the top floor of No. 463 Greenwich Street at the time.  It changed its name in 1917 to the Merit Machine Manufacturing Company.  The firm manufactured "projection lanterns" (known popularly as magic lanterns), motion picture machines, stereopticons and related items.


Almost unbelievably, it was "burned out," according to the New-York Tribune, when fire gutted the sixth floor on August 27, 1920.  Once again the elevated trains were halted for about half an hour.  The newspaper reported that the firm's losses were estimated at $30,000; or about $400,000 today.  The firm nevertheless rebuilt and was still in the here in 1925 when it advertised a new product--permanent hair waving machines.

The magazine Motor West reported on April 15, 1921 on the rise of "truck terminals" and noted "Both the public and commercial hauler gain by the operation of truck terminals."  Hudson Motor Trucking Company jointed the trend, establishing itself in No. 469 Greenwich Street in the early Depression years where clients temporarily stored goods before being shipped off to retailers.

On September 18, 1933 driver, Sherman Atwater headed to Albany with a load of drugs and merchandise.  He did not get very far.  On 11th Avenue, between 43rd and 44th Streets, his truck was hijacked by five men.  Two of them drove his van away while the others forced Atwater to the roof of a West 26th Street tenement between 10th and 11th Avenues where he was held prisoner for three hours.

Later that day police found the truck abandoned on West 48th Street.  Part of the load had been removed, but around $15,000 of merchandise was still in the van.

The gritty atmosphere of the Tribeca neighborhood at mid-century was evidenced in 1954 when the Industrial Waste Corporation purchased Nos. 467 and 469.   But change was on the distant horizon.

Tribeca's rebirth in the last quarter of the 20th century transformed its streets and population.  In the fall of 1983 the Upper West Side bakery, Umanoff & Parsons, relocated to No. 467 Greenwich Street.   In the building soap was manufactured in the first years of the century, The New York Times now praised the bakery's "excellent lattice-top cranberry apple, walnut and mixed fruit harvest pie, pumpking, pecan, apple, fudge walnut and coconut custard [pies]."

The Tribeca renaissance brought another change to the Greenwich Street buildings.  In February 1984 the upper floors of each of the buildings contained five sprawling residences.  The problem was that the structures were built as factories, not homes, and had no Certificate of Occupancy and did not meet the minimum health and safety standards.  Considering the structures' terrifying history of fires, it was a grave issue. 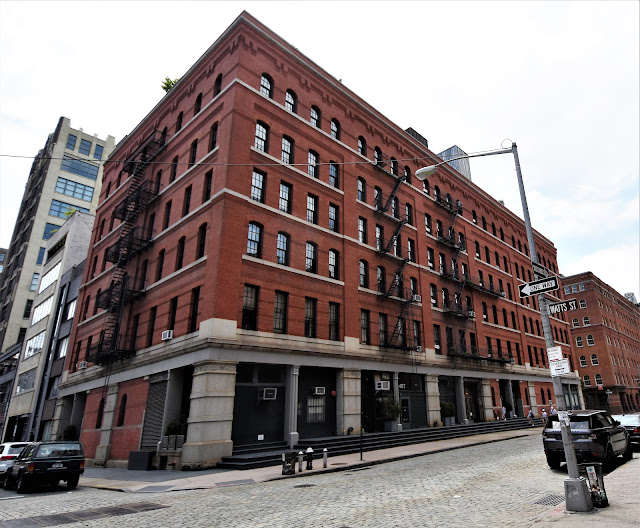 Residents and landlords faced off in court.  Papers estimated the cost to the owners to legalize each one of the buildings at $350,000.   A law enacted in 1982 required the landlords to upgrade former factories being used as residential space.   Eventually, the massive building was renovated to modern apartments.