Tudor in the Village - 26 Grove Street 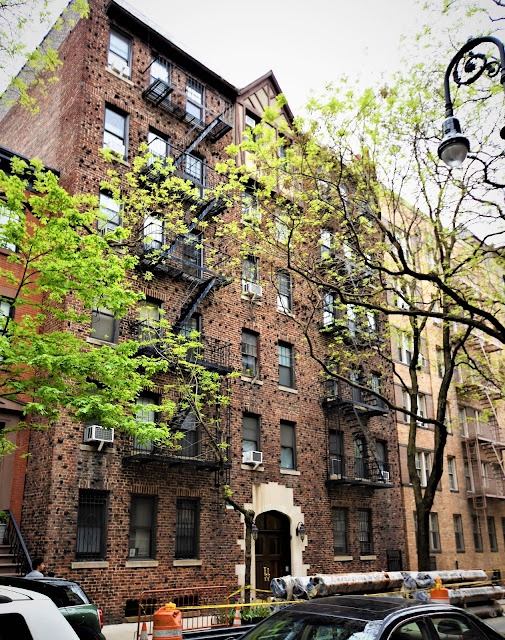 In September 1914 the Architectural Record commented on a remarkable project recently completed by heating and ventilation contractors Blake & Williams.  At a time when vintage structures were considered outmoded, they rescued the Federal-style house at No. 26 Grove Street and did a meticulous restoration worthy of 21st century conservationists.  The firm then established its offices in the century-old residence.


The restoration was so conscientious that the ironwork on the stoop--updated in the 1850s--was removed and replaced with period-appropriate railings found in a nearby junk shop.  The magazine wrote "This restoration may perhaps tend to show other firms that these old houses, with but a small amount of repair, are as well adapted to commercial uses as are more expensive new buildings, and that the old ones present, if restored in a consistent way, a far more pleasing aspect than most recent buildings of the same size."

Sadly, those hopes were dashed following Blake & Williams's bankruptcy.  In 1928 the handsome house at No. 26 was torn down and construction began on a six-story apartment house.

Designed by Louis Allan Abrahamson, working with Samuel Katz, it was the project of the newly-formed 26 Grove Street Corporation.  Completed in 1929, the architects had wasted little money on costly materials and ornament on the facade.  They nevertheless created a charming take on Tudor Revival.


Clinker bricks--purposely manufactured to be blackened and misshapen--gave the appearance of age.  They starkly contrasted with the smooth-faced stone blocks that created the irregular framing for the arched doorway.   A picturesque gable at the sixth floor featured Tudor half-timbering. 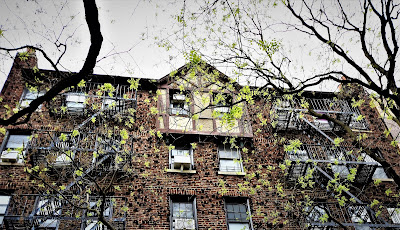 Typical of the first residents were Hugh Cook Glenn and his wife, Esther.  He was the head of the exporting firm of Young & Glenn and had formerly been in charge of the Customs Department of the Mexican Railway Company in Mexico City.

Another of the initial tenants was Howard W. Proctor, a broker.  In the spring of 1929 he found himself in serious trouble.  The 39-year old had been drinking one evening in May when he crashed into another automobile at Park Avenue and 60th Street.  Proctor drove on.

The passenger in the other car, 47-year old Sadie Mitchell, died from her injuries.  The following day Proctor was arrested and charged with driving while intoxicated, leaving the scene of an accident, and homicide.

Other tenants at the time included Jay H. Schmit, a 1916 graduate of the University of Michigan who owned a perfume business; and author and editor Clara M. Leiser, who wrote her biography of Polish tenor Jean de Reszke here.

The well-received book, Jean De Reszke And The Great Days of Opera, was her best-known work.  The magazine Poland reported in December 1933 "Miss Clara M. Leiser was entertained recently at a tea in the Roerich Museum in New York by the Polish Institute of Art and Letters, affiliated with the Roerich Society."  She spoke of her research and the magazine noted "Of special interest were the letters from celebrities throughout the world who wrote Miss Leiser about their personal impressions" of the star.  Many of those letters were the result of personal ads Clara placed in newspapers worldwide, asking for replies to be sent to the Grove Street address.

A highly visible tenant was Samuel N. Horowitz, a retail grocer.  In 1930 he bristled at the rise of chain stores that threatened the livelihoods of the neighborhood groceries.  A headline in the New York Times on March 30, 1930 read "9,000 Grocers Fight Chain Stores Here."  Horowitz was among the organizers of the grass roots movement.

The outcome was the Associated Grocery Stores Corporation of which he became head.  When he was not at work or dealing with the organization's business, he relaxed by playing chess.  Long a member of the Stuyvesant Chess Club, he headed there on the evening of February 21, 1934.  On his way up the stairs to the club room on East 14th Street, he collapsed.  The 48-year old died of a heart attack.

The Great Depression took a toll on at least one of 26 Grove Street's professional residents.  William Pritchard was an attorney; but after losing his job he eventually could no longer afford his rent.  He gave up his apartment sometime in 1937 and moved in with a friend, Patrick J. Brown, who lived nearby at No. 87 Barrow Street.

Pritchard continued to look for employment, but there was none.  On February 9, 1938 Brown returned home to find the 46-year old dead.  He had committed suicide by opening the gas jets on the kitchen range.

Mrs. Alfred Wilcox narrowly escaped a similar, but accidental, death in her Grove Street apartment five years later.  On January 5, 1943 gas seeped from her refrigerator.   While she could not detect the toxic methyl chloride, her Irish setter, Rusty, did.  If not for the dog's nervous warnings and insistent actions she would no doubt have perished.  On September 21 Rusty was honored by the Greenwich Village Humane League with a medal of heroism.

Living here in 1947 was William H. Unger, an electrical and radio engineer.  He missed a considerable amount of work in January 1947 when he was selected to be on the jury of a case that drew national attention.  Alvin J. Paris was charged with offering bribes to two star players of the New York Football Giants to throw the play-off game with the Chicago Bears for the National Professional Football League championship on December 15, 1946.

No small incident, the crime involved gangland ties, nationwide gambling on the game's outcome, and the mob violence.  The New York Times described the defendant on the day they were selected, saying he was "dressed in Broadway fashion with a two-toned tie and pin-striped blue suit."  Unger and his colleagues were be confined to a hotel for the duration of the trial.  The precaution was due to death threats that came even before the jury was decided upon.

No. 26 Grove Street got its few minutes of fame when it was used as the apartment of actor John Ritter's character Steve Nichols in the 1980 film comedy, Hero at Large. 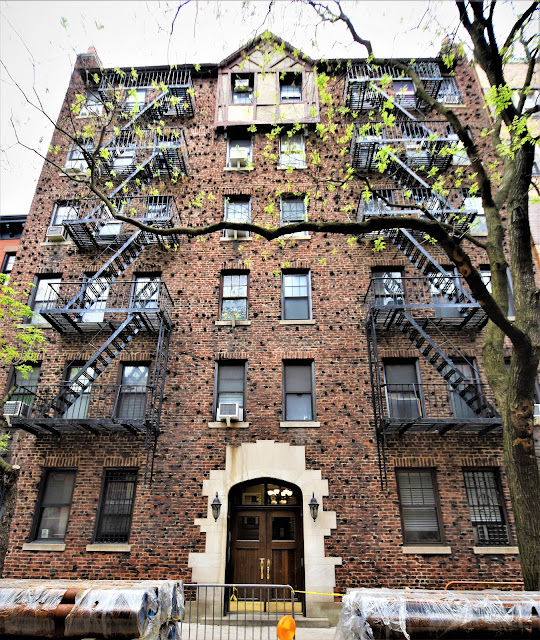 The charismatic building sits on a charming Village block, quietly minding its own business.  Only the few passersby who happen to look up catch the delightful Tudor touch at the top.