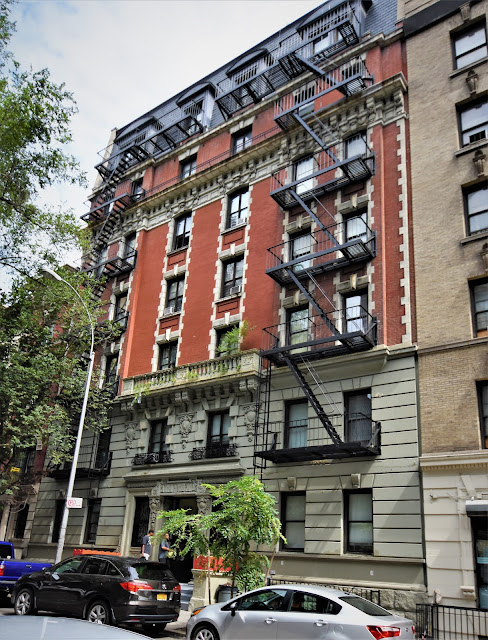 Henry Acker was a prolific developer and builder at the turn of the last century.  He focused much of his work in the Upper West Side.  In January 1901 he embarked on a new project--an upscale apartment house on 101st Street just west of Broadway.

He hired George Keister to design his building.  Somewhat overlooked today, Keister had designed several apartment buildings by now and was responsible for the exotic First Baptist Church at Broadway and 73rd Street.  His career would take a decided turn in 1904 when he designed the Yorkville Theatre.  Today he is best remembered for the string of theaters that followed.

Construction of the seven-story apartment building (which Henry Acker unapologetically named after himself) was completed in less than ten months.  Well-to-do New Yorkers had accepted apartment living by now; but they expected that their flats include the luxuries of a private house without the bother of maintenance.   The $90,000 cost of construction--more than $2.6 million today--reflected Acker's understanding of his targeted residents.

Keister's brick and stone Beaux Arts style design looked little different from the scores of transient and residential hotels rising throughout the city.  The entrance was centered within the two-story base of rusticated stone.  It was adorned with carved panels below the flanking openings, blind cartouches that dripped fruit, and a tightly-packed carved garland pressed within entrance frame and a concave hood.  Directly above the doorway two swirling console brackets acted like bookends for a wavy stone ribbon that announced the building's name.

The Parisian motif was carried on throughout the facade with French-style iron balconettes, a handsome balustraded balcony at the third floor, an iron balcony at the sixth, and a mansard roof with shallow dormers. 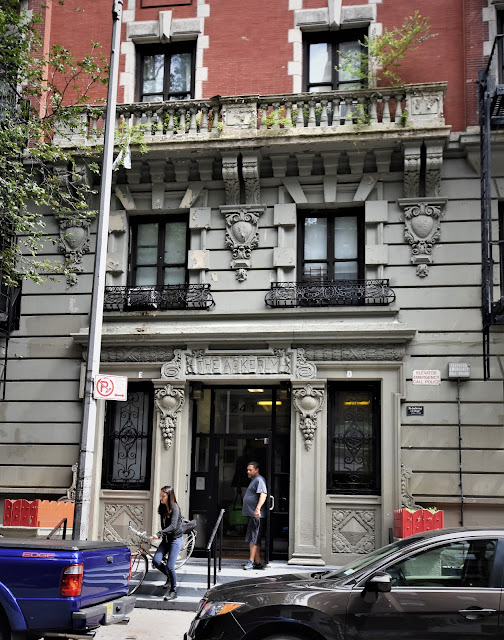 Acker began advertising the apartments in October 1901.  Calling the building "magnificent," he described the architecture as "pure French Renaissance," and boasted of the expensive interior details.  The ad noted "entrance hall finished in imported marbles, with reception rooms furnished in the style of [the] building, at once creating a pleasing impression."  Acker had spared no expense and pointed out the "windows of delicately stained glass, especially designed for this building by Tiffany."

Each floor had two apartments of eight rooms with two baths.   "Each apartment is equal to a private house, 25 feet in width."  The list of amenities included a warmer in the butler's pantry, separate servants' bathroom, private storerooms elsewhere in the building, a manned elevator that operated all night, and "extra rooms for servants."  The building staff was uniformed (or "liveried" as the advertisements described it).  The parlors were "finished in Louis XVI style," while the dining rooms were paneled in "massive antique oak."

The sparse development in the immediate neighborhoods was evidenced by the ad's mention of the view over the Hudson and Palisades, a full two blocks away.   Rent ranged, depending on the floor, from $1,100 to $1,600 a year; nearly $3,900 a month for the highest rent in today's dollars.


As intended, The Ackerly filled with respectable and moneyed residents.  Among the earliest was Francis Guy Saltonstall and his wife, the former Ella B. Hawkin.  His impressive American pedigree stretched back to the 17th century and included ancestors such as Gurdon Saltonstall the governor of the Colony of Connecticut from 1708 until his death in 1724, and Governor John Winthrop of the Massachusetts Bay Colony.

Saltonstall was 73 years old when The Ackerly was opened.  A broker for 40 years, he did not retire until 1903.  His wealth and respectability were evidenced by his acceptance into the severely exclusive Union Leaque Club in 1865, the second year of its existence.

Other residents prior to World War I were H. Frank Chase, a member of the American-Irish Historical Society; Ralph. J. F. Gerstle, vice president of the Dazie Manufacturing & Supply Co.; and architect Geroge Schwegler.  Two residents held the position of Commissioner of Deeds--Edgar Williams, appointed in 1905, and Harry Crone in 1915.

Harry was the son of Max and Sarah Crone.  Max was an executive with the Arbuckle Coffee Company.  Also living in the Crone apartment were son Edward and daughter Ethel.  The Crone family would remain in The Ackerly for years.  The family's comfortable financial position was evidenced in 1918 when Max purchased $5,000 in Liberty Bonds--an aid to the war effort worth about $80,000 today.

Things were going well for the Crone family in 1920.  Society columns reported on Ethel's engagement to Max Michel, president of the Monroe Clothing Company, in December and made note of her "at home" dates to receive well-wishers.  Her parents hosted a reception in the apartment on December 19.

Harry Crone had married, moved out, and was doing very well for himself by now.  A corporate lawyer with a degree from Columbia University, he and his wife, Edith, were living in White Plains, New York.  The couple came back to The Ackersly on April 7, 1922 for a family dinner hosted by Max and Sarah.  Also there that night were Ethel and Max, and Edward.  The event may have been sparked by the soon-to-be-announced engagement of Edward to Julia Goldberg.   The happy get-together would have a tragic ending.

When the party broke up, Ethel headed directly to Grand Central Terminal while Harry made a stop at the Bar Association to pick up some papers he needed for a trial.  When he did not arrive at the terminal by 11:00, Ethel waited nervously for half an hour.  Her anxiety increased when people passing by talked excitedly about a man being shot by bandits nearby.

Finally, after she ran into a friend from White Plains, the two women went to the East 51st Street police station. The New York Herald reported "At the police station she learned that the dead man was her husband."

Harry had been walking along 43rd Street between Madison and Fifth Avenues on the way to Grand Central.  A gunfight between police and "bandits" in an automobile broke out.  The Times reported "A pistol bullet lodged in his head and he fell unconscious."  A private automobile "capable of high speed" was flagged down and police had the chauffeur rush Crone to Bellevue Hospital."  The 41-year old attorney died a few minutes after arriving at the hospital.

Police telephoned the Crone apartment and Edward went to the police station to care for Ethel.  The New York Times wrote "The father and mother were prostrated at news of their son's sudden death."  The Ackerly apartment where the family had enjoyed a joyful dinner was the scene of Harry's funeral two days later.

Among the most celebrated of The Ackerly's residents were George S. Kaufman and Beatrice Bakrow, members of the famous Algonquin Round Table, a group of theatrical and literary figures that met daily at the Algonquin Hotel.  A playwright, director, screenwriter and essayist, Kaufman had moved into the building in 1903 after being fired from the Washington Times and moving to Manhattan.

He was making $36 a week as the backup drama critic for The New York Times in 1916 when he met Beatrice at a party given by his older sister, Ruth who had recently married.  George and Beatrice married in March 1917.  Behind the scenes theirs was a peculiar marriage.   Beatrice suffered a miscarriage shortly after the wedding and George never recovered from the trauma.  According to Kevin C. Fitzpatrick in his 2015 The Algonquin Round Table New York: A Historical Guide, "He couldn't bear to have a sexual relationship with his wife, and never did again.  From then on, they had an open marriage while maintaining the outward appearance of a normally married couple."

By the time they moved out around 1920, rents in The Ackerly had doubled to between $2,400 and $3,000.   The wealth of its residents was obvious when Isaac Dreyfus lost a piece of jewelry in 1922.   On October 13 he dropped a "platinum diamond barpin" somewhere along Broadway between 78th and 88th Streets.  He offered a $100 reward to the finder, a significant $1,430 by today's standards.

But the days of receptions and dinners within sprawling apartments would soon come to and end.  The Great Depression was not the only cause of The Ackerly's decline, although it was no doubt a contributing factor.  Apartment dwellers who could afford servants and upscale appointments looked to the modern Art Deco buildings on Park Avenue or Central Park West.  The Ackerly and other such Beaux Arts apartment houses had fallen out of favor.

One by one the grand apartments were broken up.  In the summer of 1933 three men--20-year old Henry Simon, 24-year old Walter Johnson and Max Adelstein, 23 years old--shared a furnished room in the building.  They exemplified the change that had taken place at The Ardsley.

On June 13 they broke into the Alfred Dunhill of London shop on Fifth Avenue at 43rd Street and made off with $25,000 in merchandise.  Police were close on their trail and the following day they were arrested as they were about to enter a cab in front of The Ackerly.  Simon was carrying a bag "containing all the Dunhill loot," reported The Times.

Henry Simon was already well-known to police and was out on probation on another burglary charge.  Investigators may have suspected him because of his diminutive proportions and the size of the opening used to get into the store.  The Times sub-headline read "Tiny Burglar is Captured With Loot" and the article noted "he is barely 5 feet tall and weighs 120 pounds."

Howard Rockney lived in the building at the time.  The author of 12 novels and many short stories, magazine articles and screenplays, he was down on his luck and living in a furnished room.  Separated from his wife, Ethel, who lived in Pennsylvania, he was found on the floor of his apartment on May 27, 1934.  The 47-year old had suffered a heart attack.  His right hand was, according to a newspaper, "clutching a copy of his last novel, 'Love, Honor and Deceive,'" which had just been published.

Where once there had been just two apartments, in 1948 The Ackersly had 16 single room occupancy rooms on each floor.  Sharing one of those rooms in 1950 were 22-year old actor Bruce Colt and his father, Philip Corvus.   The pair got into a serious disagreement during which Cole, a former marine, pummeled his father.  The police said he "struck him with lamp and his fists during an argument."  Corvus, 43-years old, died at the Knickerbocker Hospital on June 7, several days after the altercation.

Colt was arrested and charged with homicide.  But despite what seemed to be overwhelming evidence, a grand jury refused to indict him and the charges were dropped on June 28.

In 1960 the City Housing Authority initiated a program to seize and refurbish "deteriorating tenement houses in which desperately poor families are packed into squalid single rooms."  Owners, members of the United Rooming House Operators, Inc. challenged the city's rights in court.  Included was the owner of The Ackerly.  Their attorney contended "that the city should not condemn such tenements without first giving the owners a chance to make their own repairs."

The general manager of the Housing Authority, Gerald J. Carey, did not hold back in describing The Ackerly to Supreme Court Justice George M. Carney.  The New York Times, on May 5, 1960, reported "Mr. Carey described the tenement at 241 West 101st Street as 'a cancer in the area.'  During his career, he said, he had developed 'a pretty strong stomach, but I couldn't complete the inspection of this building."

The subsequent renovations, completed in 1962, resulted in four apartments on the first floor and six each above.  While the Louis XVI parlors and oak-paneled dining rooms are gone the way of the butler's pantries and servants' bathrooms, The Ackerly is once again a respectable apartment building.   And while the zig-zagging fire escapes obscure George Keister's French-inspired facade; the elaborate entrance announcing The Ackerly hints at its former glory.