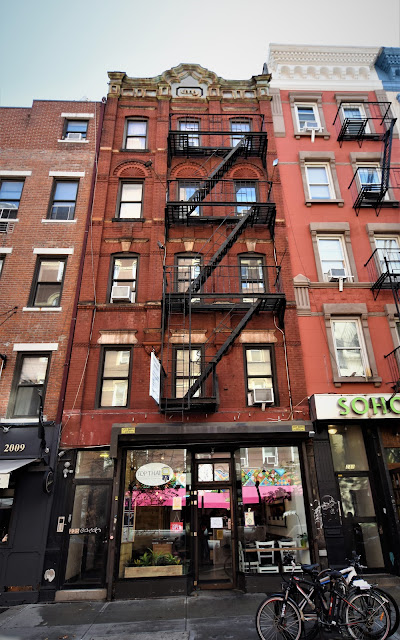 In 1886 the neighborhood of Bleecker and Minetta Streets, just south of Washington Square, had a seedy reputation.  Minetta Street and Minetta Lane were known as "Little Africa," the center of Manhattan's black population.  Reformer Jacob Riis described it as the social "bottom" of the West Side, and rebuked the squalid housing he called "vile rookeries."

Once a street of elegance and wealth, Bleecker Street was described by James D. McCabe in his 1883 New York by Sunlight and Gaslight.  "Until the march of trade drove the fashionable world into Washington Square and Fifth avenue, to be the owner of a Bleecker street mansion was to be at the height of fashionable felicity."   Now, he explained "all sorts of people who live by their wits find homes here, and it is a queer looking crowd one meets on the sidewalks."  McCabe warned "it is at the best a sort of doubtful neighborhood, which people with reputations to lose avoid."

Dr. John H. Dorn was employed by the New York City Police Department as a "police surgeon."  He was described by Police Inspector John A. Blair on October 1, 1886 as "of very high reputation and respectability."   And so it was surprising that he chose No. 235 Sullivan Street, between Bleecker and West 3rd Streets, as the site of a real estate investment.  The property sat squarely within the district Riis and McCabe decried.

Dorn selected Richard S Rosenstock of R. Rosenstock & Co. as his architect.  He filed plans on March 12, 1886 for a "five-story brick, stone and terra cotta front tenement and store" to cost $10,000--in the neighborhood of $263,000 today.   The little-remembered architect had just completed the Queen Anne-style Fink house at No. 8 St. Nicholas Place and would turn to the same style for Dorn's project.

The completed 20-foot wide structure was embellished with popular Queen Anne elements like the deeply molded terra cotta fans with their brick eyebrows above the fourth floor openings, the delightful fish-scale bases to the two central piers, and the squashed-looking stone lintels of the second floor.  Rosenstock stepped away from the style when he added an elaborate, Baroque cast metal parapet that announced the construction date. 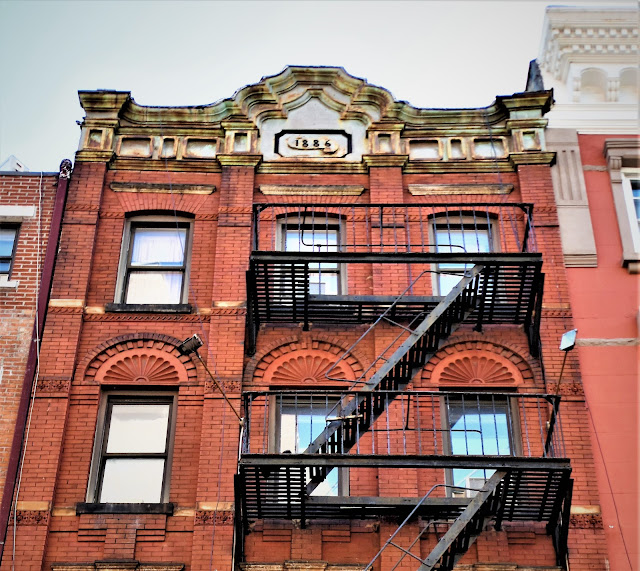 The building was acquired by August Guidon who operated the upper floors as the French Hotel and installed a saloon in the ground floor shop.   The barroom was called The Black and Tan because it served both white and black patrons.   This was no innocent hotel and no ordinary saloon.

Guidon took full advantage of the neighborhood's lax police enforcement.  McCabe had noted that "life here is free from most of the restraints imposed elsewhere."  The Black and Tan was the haunt of prostitutes and the French Hotel above was a four-story brothel and flop-house.

Although Guidon's operation was notorious, police turned a blind eye for years.  It was not until 1892 that increasing pressure from reformers and newspapers forced a change.  On January 12 police conducted a raid following a publicized report that "the place was a resort for the lowest class of men and women, at all hours of the day and night."

The New York Times reported that Guindon, "the proprietor of the infamous resort known as the 'French Hotel,' at 235 Sullivan Street" had been arrested along with 32 men and 13 women.   One of the prisoners, Leon Able, was caught "jumping out of a window at the time of the raid [with] a pair of brass knuckles in his pocket."

The judge was not lenient.  Guidon was held on $1,000 bail.  The others were fined $10--around $275 today.  In lieu of the fine, which few would have been able to afford, they were send to Blackwell's Island for six months.

New Yorkers were accustomed to owners of "disreputable resorts" receiving a slap on the hand and reopening their dives before long.  But the new reform movement changed that.  It was the end of the line for The Black and Tan and the French Hotel.  Three days after the raid The Evening World exclaimed "Last night saw no signs of returning life in the more than half-dead monster, Outlawry" and noted "five of New York's worst dives" were permanently closed down, including Guidon's operation.

While its proprietor sat in jail, the former patrons of The Black and Tan loitered inside.  On January 19 The Evening World reported on the five operations that had been shut down.  "All these dives which were formerly the most notorious and malodorous of all New York's dens of vice, were still tightly closed last night.  There were no signs of life in any of them with the exception of Guidon's, where the shades were drawn and several men were sitting about the stove in the brightly lighted barroom.  One man was lounging on an old sofa, the head of which was up against the front doors, but so far as could be learned, no liquor was being sold nor was admittance granted to any of the former patrons of the place.  The loungers it was said, were Guidon's boarders, who now use the abandoned saloon as a lounging-room."


The following month the newspaper updated its readers, saying that the "den-keeper" Guidon was in the penitentiary, his license revoked, and the "dive closed for good."

The former Black and Tan continued life as a saloon, but its days of lawlessness were over.   The French Hotel was gone and the upper floors were operated as a tenement house, as originally intended.  By now the Sullivan Street block was on the upper edge of New York's Little Italy and the building filled with low-income Italian immigrant families.  The Pruzzo family lived here in 1898 when their their one-year old son, Joseph, died in their rooms on September 18.

The heavily-Italian population was evidenced in the names of owners and proprietors of No. 235.  In the first decades of the 20th century the saloon was run by Azzaretti & Michelino.   In 1925 Joseph D'Elio purchased the building, but quickly resold it to Mrs. Vincenza De Rosa who announced intentions to "hold it for investment."

In the 1930s, according to Eric Ferrara in his Manhattan Mafia Guide, No 235 was home to the young Carmine Galante.  Listed as a sorter at the Fulton Fish Market, he had already been arrested in connection with murder of Police Officer Walter De Castilla.  Galante, known as "The Cigar" and "Lilo," would become the boss of the Bonanno crime family.

In the last quarter of the 20th century the Italian population became diluted as younger generations moved on.  The change in the neighborhood was vividly evident when Second Coming moved into the former barroom space around 1981.  The second-hand vinyl record store was a destination for collectors for decades. 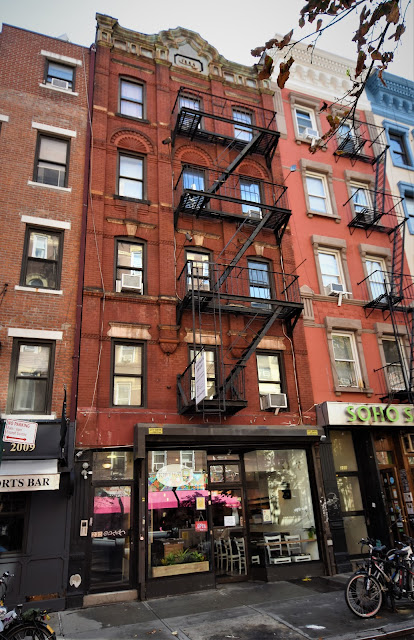 Today the block once avoided by "people with reputations to lose" is lined with sports bars, clothing shops and trendy restaurants.  The former Black and Tan saloon space, where "degraded women" worked their trade, is now a Thai restaurant behind a modern shop front.   And Richard Rosenstock's 1886 Queen Anne facade quietly hides its scandalous and colorful history.

non-credited photographs by the author
many thanks to reader Ted Leather for suggesting this post
Posted by Tom Miller at 1:55 AM