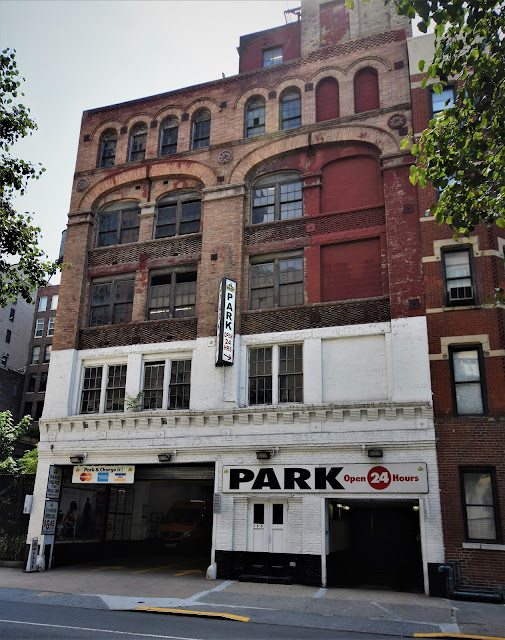 In the decades before the outbreak of Civil War the block of West 20th Street between Sixth and Seventh Avenues was lined mostly with three-story homes built for families of moderate means.  In 1848, for instance, Peter Van Iderstein, a "licensed cartman," lived at No. 148 and Francis McNally, who taught in Public School No. 17, lived next door at No. 150.

As the neighborhood changed in the last quarter of the 19th century, John Murray saw financial opportunity in the old houses.  Sixth Avenue was becoming a major shopping thoroughfare and Seventh Avenue, too, was increasingly commercial.

In January 1893 Murray hired George Fred Pelham to design a five-story brick stable on the site of Nos. 148 and 150.  The architect learned his trade in the office of his father, George Brown Pelham and had opened his own office less than three years earlier.  The fledgling architect no doubt welcomed this latest commission.  He would not truly come into his own until the 1920s when he designed apartment buildings in what became his signature neo-Tudor style.

For Young he turned to a commercial take on Romanesque Revival.  Completed a year later the $40,000 building (about $1.15 million today) was clad in Roman brick and was dominated by two massive three-story arches separated by brick piers.  They engulfed four smaller arches filled with double hung windows.  The fifth floor featured two four-window arcades with projecting brick eyebrows.

While Pelham did use contrasting materials like the rough cut brownstone lintels at the second floor and the limestone capitals of the fourth floor, the bulk of his ornamentation was executed in brick.  A stair-stepping brick cornice ran above the carriage bays and a sharp corbel table sat below the second floor.  The brick constituting the spandrel panels above the second and third floors and the upper cornice was laid in a honeycomb pattern.   Three large terra cotta roundels decorated the upper facade.

John Murray sold the completed building to Michael Gillespie, who quickly turned it over to millionaire Russell Sage.  Sage traded two empty plots at the northern corner of Central Park West and 69th Street for the stables.  The lots were worth $65,000.

Russell Sage was a financier and railroad mogul who had no interest in running a livery stable.  His purchase was an investment.  He leased the building to Patrick and Tole Hart.

The forward-thinking brothers added a modern innovation--a telephone (their phone number in 1895 was 1137).   The improved communication meant that an owner could call ahead and when he or his coachman arrived the horses would be harnessed to his carriage and ready to go.

The size of the stables allowed for the storage of many vehicles and the housing of teams of horses.  Even those wealthy enough to have their own carriage houses would have used boarding stables like this to store seasonal vehicles like sleighs.  Small businessmen like cartmen or hansom cab drivers used boarding stables, as well.  The livery portion operated much like today's rental car businesses, leasing buggies and cabriolets for day trips.

Neither Tole nor Patrick Hart could expect to see their names in newspapers; but that briefly changed in 1897.  That year some of Manhattan's wealthiest and most powerful men--directors and officers in the American Tobacco Company--were accused of conspiracy.  James B. Duke, Benjamin N. Duke, and William H. Butler were among the millionaires to be tried.  Tole Hart was called for jury duty in the case.  But he had no intention of serving.

The New York Times reported on June 12, "He said he had read a little about the case, had a prejudice against trusts so strong that he thought the chances were that he would vote to convict an individual connected with a trust, irrespective of law and fact.  He was excused by consent."

Hart later revealed that his disinterest in serving had more to do with jury watching.  To guarantee that the jurors were not influenced the courts had them followed.  The New York Journal and Adviser explained that Pinkerton detectives were charged with following the jurors day and night.  As a double-check detectives from the Drummond Agency, in turn, monitored the Pinkerton men.

"While Smith is being followed by the Pinkerton detectives, the Drummond detectives are watching Pinkertons.  When the Pinkerton talks to the juror at dinner about the weather and trade the other detective keeps the pair in sight.  A third man is watching the trio."

Tole told a reporter from the New York Journal "I would never have had any rest until the whole trial was over.  This thing of being followed to one's door by mysterious looking individuals and not being allowed to eat a meal or drink a glass of soda water without having Pinkerton men rubbing up against you for the purpose of taking note of every word you say is not at all pleasant."

Among the patrons of the stable in 1903 was William M. Mooney who housed his hansom cab and team here.  He nearly lost his cab and his life on May 20 that year near the Waldorf-Astoria Hotel.

Nearby, on the third floor of No. 329 Fifth Avenue, was Harriet Darling's music studio.  Around 5:00 a group of well-dressed women were enjoying a recital by vocalist Mary Gallagher.  Suddenly Mrs. Darling noticed that her portieres were on fire.  She tried to put out the flames herself, but the fire spread.   Mary Gallagher continued to sing, hoping to prevent panic "but without effect," said the New-York Tribune.

William Mooney had two passengers in his cab, Frank Clarke and his wife, who lived on Staten Island.  Just as he entered the intersection of 34th Street and Fifth Avenue the tender of Engine No. 65 came galloping to the fire.  A violent collision followed.

"The cab was overturned and Mooney thrown from his seat to the pavement," reported the Tribune.  Mooney was not severely hurt nor were his heavily-shaken passengers; however his hansom was destroyed.  The New York Times said "The heavy fire wagon shivered the cab to splinters."

Two years later, on June 27, 1905, a Hart Brothers employee was preparing the rig owned by John Cronin when the horse became spooked and bolted out of the stable.  At around 7:00 that morning Policeman William D. Kenealley was on patrol around the Flatiron Building, three blocks away.  It was a quiet day, reported The New York Times.

"Then he heard the rattle of harness coming down Broadway, also a human cry."  The headline of the newspaper's article read "Tale of an Exciting Broadway Incident Without a Hero."  As the horse, dragging its leather tack, galloped by, the policeman rushed into the street and grabbed the bridle.

On a day without much news to report, The Times was comical in its tongue-in-cheek description of the hero-less incident.  "No person was in an attached vehicle; there was no vehicle...He wasn't dragged any distance.  He wasn't hurt, and no damage was done.  No little girl, beautiful woman, or aged man was dragged out of the way."  The horse, said the article, was led back to the 20th Street stable.

By 1913 Hart Brothers had purchased the stables.  But by now horse-drawn vehicles were rapidly being replaced by machines.   When the newly-formed 148 and 150 West Twentieth Street Realty Company purchased the building in March 1922 it was being described as a "five-story garage."

Fire ripped through the building on October 3, 1949.  Firemen Frank J. Sergi and Henry D. Brookman received medals for heroism the following March for rescuing a man from the flames.  The subsequent renovation was completed in 1951.  It was most likely at this time that the yawning garage opening replaced the carriage-sized bay door, still seen at the western end.  The Department of Buildings noted that the garage was to house "pleasure type cars only." 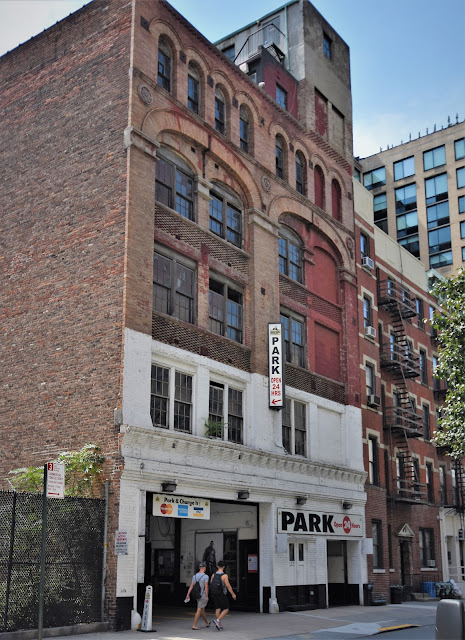