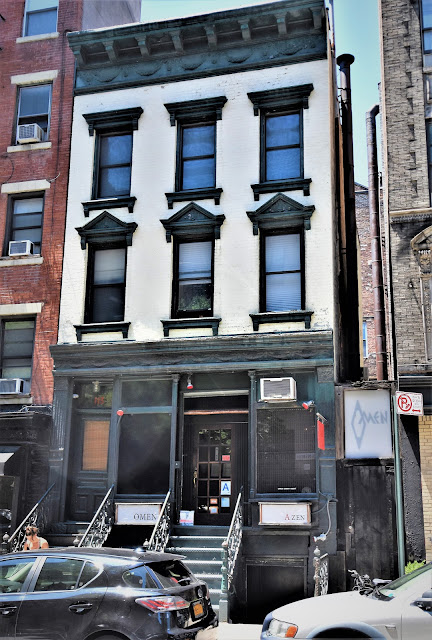 Erected in 1833, the Second Associate Presbyterian Church sat at the corner of Prince and Thompson Streets.  The congregation sold an unused lot behind the church to Henry S. Richards in 1842.  He set to work constructing a brick-faced house on the 19-foot wide plot.

Richards was well-to-do and cultured, a member of the American Art-Union, for instance.  His new project was purely an investment.  As the three-story Greek Revival style house neared completion in 1843 he advertised it for rent.

The first tenant of the 14-room house seems to have been James C. Hoe, a partner with his father in the construction firm of William Hoe & Son.   James was living here in 1849 when his father died.  He took his brother Richard into the business, renaming it Richard & James C. Hoe.

On July 29, 1849 James lost his pocketbook in the neighborhood.  He pinpointed the loss at being either on Varick or Charlton Street, about two blocks away from the house.   The pocketbook contained some cash, but it also held a check for $100 and a contract for lumber.  Hoe advertised that "The finder, by returning it to J. C. Hoe...will be satisfactorily and liberally rewarded."

Richard died in 1856, passing ownership of No. 113 Thompson Street to his son, James N. Richards.  In 1859 the family living here, possibly still the Hoes, advertised for a servant.  The upscale tenor of the residents was reflected in the mention of "fine clothing."   The pay offered would be equal to about $60 per week today.

WANTED-An American girl, who is a good cook and capable of washing and ironing fine clothing.  Apply at 113 Thompson st.  Wages $8 per month.  None but Americans need apply; colored person preferred.

By 1863 rooms were being rented in the house.  (James Hoe and his brother later moved into matching mansions at Nos. 325 and 327 West 14th Street.)  On July 28, 1863 an advertisement offered "A Lady or Gentleman, or two ladies with quiet habits, can be accommodated with neatly furnished rooms--board for ladies only."

The wording made it clear that disreputable women would not be tolerated and that men could find their meals elsewhere.

The house remained in the Richards family, owned by Robert G. Richards by the end of the decade.  The first years after the end of the Civil War saw the neighborhood change.  New York City's black population had been centered around Minetta Lane, roughly two blocks to the north.  Now freed slaves came north, expanding that district's borders.  Thompson Street filled with African American residents as well as indigent immigrants from Europe.

Richards placed an ad in The New York Herald on December 18, 1869 offering "To Let--with possession, the handsome three story high stoop brick House, 113 Thompson street, near Prince.  Will let to a respectable colored family."  A few weeks later, in January 1870, he re-ran the advertisement, adding "will let very low to responsible tenant."

Richards's tenants were not a black family, as he apparently expected, but that of 36-year old Polish-born physician Jacob Rosenzweig.  With him in the house was his 33-year old wife, Leonora, their 13 year old daughter Rosa, and sons George and Seymour, 7 and 2 years old.   1870 census records reveal that they rented a room to a 19-year old "English-woman."

Rosenzweig's reason for leaving Thompson Street in 1871, in favor of basement rooms at No. 687 Second Avenue, may have been connected with a grisly affair involving a patient, Alice Augusta Bowlsby.   The pretty seamstress from Patterson, New Jersey was considered "virtuous" by friends.  But her virtue was compromised by Walter Conklin, son a wealthy silk mill operator.

Late in August a steamer trunk was delivered to the baggage room at the Hudson River train depot.  It sat unclaimed until a baggage agent noticed a putrid stench.  When police pried it open, they found the naked corpse of Alice Bowlsby.  One journalist described the rotting body in idealistic Victorian prose, "A tangled mass of the most beautiful golden hair fell in waves over her shoulders, which must have been white as Parian marble, and eyes of blue, that even death's horrors cannot pale."

Less poetic was the Cornoner's report, which noted her "lower parts" were "swollen," and that a placenta was discovered.  It was a sure sign that Bowlsby was the victim of a botched abortion.  But perhaps most disturbing was the conclusion that she had been stuffed in the trunk still alive.


Detectives pieced together the evidence, which pointed to the doctor whom The New York Times called on September 3, "the monster Rosenzweig."

The house changed hands among the Richards family again in 1873, when Robert transferred title to Edward C. Richards.  Edward did some remodeling then advertised it for rent on January 18 1874, noting "all modern improvements and in complete order; painted, papered, &c."

With apparently no takers for the entire house, Richards then offered floor-through suites.  In May he advertised five rooms in the parlor level, three rooms on the second floor and five on the third.  But the Thompson Street neighborhood continued to decline.  By 1885 the once respectable house was being leased by Thomas Taylor, who operated it as a lodging house, the lowest form of accommodations.

Unlike rooming houses (which were a step below a boarding house), lodging houses offered no amenities.  Instead, for a much cheaper fee the lodgers received an over-night bed with (hopefully) fresh sheets.  Patrons of lodging houses were commonly low-class petty thieves or alcoholics.

Another lodger, Thomas Digney, was briefly a suspect in a murder investigation the following month.   Just over a block to the south, at No. 162 Spring Street, was Edward J. Hernon's saloon.  Around 8:30 on the morning of March 9, his bartender, Thomas John Molloy, stumbled onto the street, a whiskey glass still in his hand, crying "Murder! Murder!"   Passersby carried him back into the saloon, where he died of a pistol shot in the heart.

There were only a few patrons in the bar at the time, one of which was Digney.   Another threw suspicion on him.  The New York Times reported "Thomas Digney, a tramp truck driver, who lodged at No. 113 Thompson-street, was pressing around the dead man and tying up his jaw and legs."  George W. Raynor told detectives he "considered his action suspicious," and when he questioned him, Digney replied "If you're so smart, why don't you get me arrested?"  He did.

After being questioned at the Prince Street station house, Digney was released.

The house accommodated 40 lodgers per night in 1886.  The men paid between 10 and 15 cents for their beds.  The highest rate would be around $4 today.   The often pitiable lives of the lodgers was exemplified in a single line entry in the Coronor's Book on New Year's Day, 1888:  "Unknown man, age forty years, died suddenly at the lodging-house, 113 Thompson street at 8.15 P. M."

The end of the line for the lodging house came in 1893 when the Episcopal City Mission Society paid $15,170.09 for the house and property.  Architects Harney & Purdy were hired to convert it to the Mission of St. Barnabas's Chapel, including a kindergarten.   The congregation of St. Ambrose Church used the meeting space.

By the turn of the century the kindergarten was being operated by the West Side Italian Settlement.  On December 19, 1902 the New-York Daily Tribune warned its readers that the "sixty-five little tots that five mornings in the week fill the big, bare hall at No. 113 Thompson-st." were in danger of being forgotten by Santa Claus, yet again.

Many of the children spoke no English and some barely understood the holiday.  The newspaper explained "There are almost all nationalities represented, but the Italian predominates, and the bright cards and worsted in the 'busy play' are a source of never ending delight to these color loving tots."

The reporter interviewed Annie Tomasso, who said that last Christmas her father had promised her a dolly, "but he went to sleep on the floor all day and forgot."   A teacher told of finding five-year old Freddie in the corner of his family's one-room apartment eating "bread and jelly."  She knew his mother could barely afford bread, and when she said "Jelly, why, how very nice," he admitted "I'm just makin' believe it's jelly."

The article was a thinly-veiled plea for donations of toys for the underprivileged kindergartners.  "But despite the assurance to little Annie Tomasso that Santa Claus would 'surely not forget,' the 'overflow' teacher fears that unless some proxy Santa Clauses with big hearts and helping hands find time to do the the Christmas Saint's bidding in the next week, it will be a pathetically poor little remembrance that comes the way of the 'overflow' folk in Thompson-st."

The ploy worked.  On January 5, 1903 a letter from teacher S. Elvira Hodges appeared in the Tribune, thanking contributors.   She ended it saying "Little Annie is now the happy possessor of a doll and Freddie eats 'really, truly jelly' on his bread."

The following year real estate operators Pepe Brother and D. Gallo sold the building for $15,000.  Charles Friedman commissioned architects Bernstein & Bernstein to renovate it to a store and tenement.  A cast iron storefront was installed, distinctive metal pediments were added to the second floor windows and a classically-inspired swag frieze below the cornice.

Crime and poverty were still problems in the area in the first decades of the 20th century.  The store space was a saloon during the World War I years.  It was the scene of violence on December 5, 1918.  The Evening World reported "Murder--By five patrons in a saloon and eating place at No. 113 Thompson Street, a 3 P.M., in which Giuseppe Luso, of No. 180 Prince Street, fell dead, shot through the heart.  No arrests reported."

The name of the victim reflected the increasing Italian population; and by the Depression No. 113 Thompson Street sat firmly within New York's Little Italy.  In 1938 the building was purchased by Allesandro Rinaldi.   The saloon was no longer and the lives of the hard-working, blue collar Italian residents drew little attention for the next few decades. 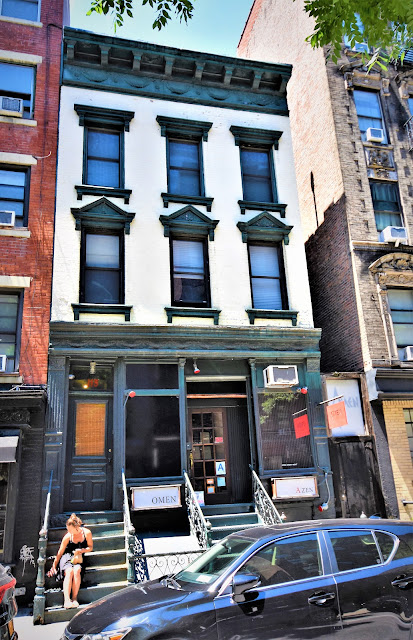 But the neighborhood would see change once again by the last quarter of the century.  Sitting on the edge of the Soho artists' district, No. 113 was suddenly trendy by the spring of 1977.  Writing in The New York Times on April 22, Anna Quindlen said "Further west, at 113 Thompson Street, is the OG dining room, which should be singled out for an outstanding contribution to the weekend streetscene--a pushcart full of chocolate chip cookies that is habitually parked on the corner of Prince street and West Broadway."  That restaurant was replaced in 1982 with Omen-Azen, which features "casual Kyoto-style Japanese cuisine."

Through it all, No. 113 Thompson Street retains its charming 1904 appearance--a delightful slice of Little Italy at the turn of the last century.