The parish of Saint Jean Baptiste was founded in 1882 to serve the Yorkville ndistrict's growing French-speaking population.  The congregation soon built what The New York Times later called "the little red brick French Church of St. Jean Baptiste" on 76th Street.   In 1900 the church was chosen to house a relic of Saint Anne, formerly located in Canada.   But the modest structure was hardly proper, prompting Archbishop Michael Corrigan to comment at the inauguration of the Solemn Exposition in December that year "Evidently this church is too small and not imposing enough for the requirements of perpetual adoration."

Thomas Fortune Ryan was among New York's wealthiest and most philanthropic citizens.   According to church legend, he often attended mass at St. Jean Baptiste, preferring it to the more pretentious society churches.   The story goes that he arrived late for mass and was disgruntled to find standing room only.  During the announcements a plea for donations for a new structure was made.

Afterwards, unaccustomed to standing and having no intentions to do so again, he approached Father Letellier, asking how much a new church would cost.   The priest threw out a figure from the top of his head.  "$300,000.00," he said.  Ryan told him to proceed with the plans.


Land was acquired at the southeast corner of Lexington Avenue and 76th Street.   Construction began in 1911 and about a year later, on April 28, 1912, the cornerstone was laid  An orchestra played as the choir sang before a crowd of 8,000 onlookers.  Cardinal John Murphy Farley smoothed the mortar with a silver trowel and the stone was set in place.  Inside was a copper box containing a medal from Pope Pius, a copy of that morning's newspaper, and a parchment bearing the names of the Fathers of the Blessed Sacrament connected with the church.

While some might have expected such an important architectural commission to go to one of Manhattan's more famous architectural firms, it had been awarded to Nicholas Seirracino.  Primarily a designer of ecclesiastical structures, he had just completed the Roman Catholic St. Clare's Church on West 36th Street a year earlier.

His monumental design drew inspiration from several Italian Renaissance churches.  A classical portico upheld by free-standing Corinthian columns sat above a wide staircase.  Just below and on either side of the twin bell towers stood trumpeting angels.  Completing the Renaissance design was the 172-foot tall dome.

As construction continued, The New York Times reported on November 3, 1912, that Ryan's gift had significantly increased from the original $300,000 estimate.  "It will be one of the largest and most imposing Roman Catholic churches in America," it said, "accommodating 7,500 persons.  The cost will be about $1,000,000."  The newspaper noted that Ryan had "determined to build for the fathers a church of cathedral-like proportions and of the highest artistic beauty."  The completed Church of St. Jean Baptiste was dedicated on January 6, 1914.


The quiet devotions of worshipers were dramatically upset on the evening of November 30, 1918.   There were a few women in the church that night when two blocks away a gun-wielding man named Charles Georges ordered Dr. Richard Kovacs out of his automobile and then drove off with it.  The doctor hailed police who joined him in chasing the car.

When Georges ditched the car near the subway entrance at Lexington Avenue and 76th Street, the police began firing.  The thief shot back then rushed up the stone steps of the Church of St. Jean Baptiste.  The New York Times reported "The chase continued up the central isle and shooting went on as Georges climbed the stairs leading to the choir."  When Georges ran out of ammunition, he was subdued and arrested.

The newspaper added "After he had left with the police some of the women who had not become hysterical continued their prayers.  No one was injured." 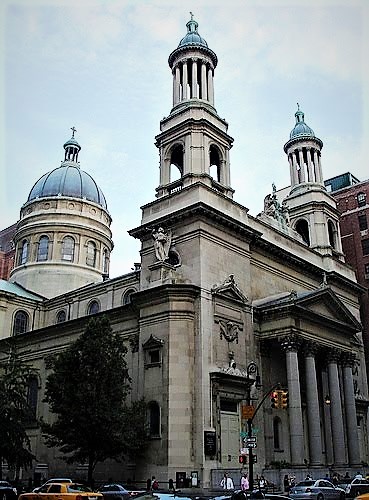 Almost a year to the day later another disturbing incident took plate.  French-born Cecilia Simon was 33 years and worked as a maid in the home of William Geenough on East 56th Street.   She was said to be devout and attended mass every morning.

On Sunday November 23, 1919 Cecilia dropped her envelope into the collection plate.  Later when the envelopes were opened, hers did not contain cash, but a note saying she objected to certain items being placed on the altar.   She apparently kept watch, but none of her perceived offenses were corrected.

The following Saturday she left the Greenough house, telling another maid that she was "going out to do some good work; to smash some statuary."   A funeral service had just completed when Cecilia walked into the church and approached the altar.  Before anyone could stop her she "swept several costly pieces of statuary and candelabra from the altar to the floor," according to newspaper reports.  The damage amounted to about $3,000 (nearly $42,000 today).  She was arrested and taken to Bellevue Hospital for observation.


On May 29, 1921 the New-York Tribune reported stunning news.   Archbishop Patrick J. Hayes had returned from Rome, where he had petitioned the Holy See with an unlikely request--one which was granted.  At 4:00 that afternoon, said the article, St. Jean Baptiste would become a Major Basilica--the first in the United States.  As a matter of fact, it went on, only "three other churches, all of them in Rome, have been raised to the dignity of Major Basilica."

When the annual Novena to St. Ann opened on July 17, 1921 more than 5,000 persons were in attendance.  The New York Times reported that they "had the supposed relic, a bone of St. Ann, applied to their afflicted parts.  Some had only a headache, but others suffered from cancer, lameness, blindness and epilepsy."

The faithful related their miraculous stories of a year earlier.  "A boy of 8 appeared walking naturally before Father Pauzet and told him that he had been lame in one knee and had come to the shrine on crutches.  He had been instantly cured, he said.  A woman said that last year she had been cured of a growth; that all signs of this had since disappeared and now she had com again to give thanks.  Another woman said she had been instantly relieve a year ago of a bad sore throat."

With the new honor came a new altar--the costliest and second largest in the United States.  On October 30, 1921 the New-York Tribune reported that the $100,000 altar ($1.34 million in today's dollars) was set to be installed.

"The altar will be forty-seven feet high, twenty-eight feet wide, and twenty-six feet deep.  It is of Italian Renaissance design, the altar proper being approached by a flight of five steps of marble."   It was constructed in the United States by Gorham & Co., although the carvings were executed in Italy.   The central panel depicted a marble depiction of Di Vinci's "The Lord's Supper."  On either side were panels of St. Matthew and St. John.

"Another base course is of Botticino marble, ornamented with mosaic panels containing ecclesiastic symbols, and the door of the Tabernacle is of bronze studded with precious and semi-precious stones.  The throne for the Monstrance is of bronze and is surmounted by adoring angels."  Above the altar rose the baldachino, supported by 12 red marble columns.  Mosaics of saints decorated the interior, and the canopy over the altar was made of velvet and ermine.

Over the years the magnificent church was the scene of elaborate funerals and fashionable weddings, but one of the most memorable and subdued was that of Thomas Fortune Ryan on November 26, 1928.  The tycoon had left an estate estimated at around $300 million, but he requested the simplest service that the church could perform.  The Times reported "A single priest officiated.  There was no eulogy, no honorary pallbearers, no flowers, except for a handful of red roses on the candlelit altar."


The church was packed--from titans of industry to servants from the Ryan household.  Among the mourners were J. P. Morgan, Otto H. Kahn, Charles M. Schwab, Elihu Root, Bernard Baruch, and Clarence H. Mackay.  There were politicians, like Senator Royal S. Copeland and James W. Gerard, former Ambassador to Germany.  Yet the entire service lasted only 25 minutes.

The congregation that had been formed to serve French speaking immigrants, most from Canada, had changed.   By the time of Ryan's funeral the membership included society leaders like Helena Woolworth McCann, the wife of millionaire attorney Charles E. F. McCann and daughter of Frank W. Woolworth.  Her funeral on March 18, 1938, was much less muted than Ryan's had been.  A solemn high mass of requiem was celebrated and floral tributes included two 8-foot crosses composed of lilies.

Cardinal Francis Joseph Spellman presided at the pontifical mass to celebrate the Church of St. Jean Baptiste's 75th anniversary on October 27, 1957.  The service included several monsignors and two auxiliary bishops.   The New York Times reminded its readers of the stark differences that had occurred since the church's beginnings.  "The parish's first mass was said above a still-existing stable at 202 East Seventy-seventh Street on Washington's Birthday in 1882."

It was not only the parish, but the neighborhood which had changed.  Following Vatican II masses in French were discontinued.  By now the rowhouses of Lexington Avenue had been replaced by the sprawling Lenox Hill Hospital complex or converted to shops and apartments.  It remained, nonetheless, an upscale neighborhood.  So it was surprising when a worshiper was attacked within the church on October 28, 1970.

Anna King, a 63-year old widow, attended mass every morning.   That day she visited the St. Anne Shrine in the lower chapel just after 8:30.  As she made her way back up the spiral staircase to the church proper, she was attacked by three teens who tried to wrest her purse from her.   She steadfastly refused to let go of the purse and the youths fled, but not before stabbing her four times in the back.

In 1989, after limestone chunks fell to the Lexington Avenue sidewalk, a $6 million restoration was initiated headed by the architectural firm of Hardy Holzman Pfeiffer Associates.  The magnificent building was designated a landmark in 1969 by the recently-formed Landmarks Preservation Commission.