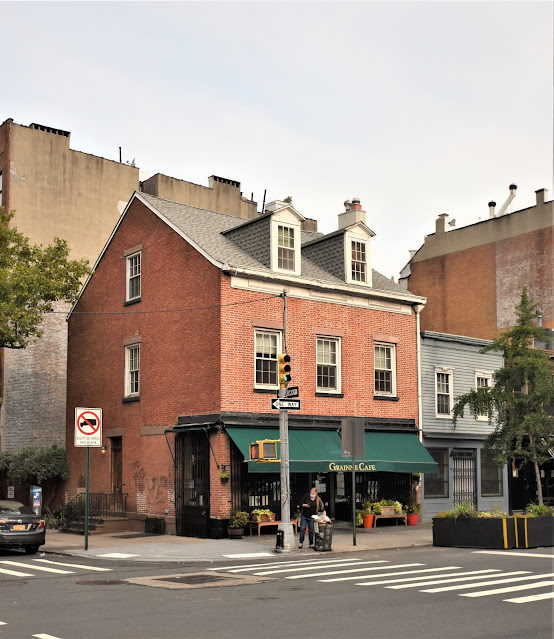 James N. Wells was a carpenter-builder in Greenwich Village, responsible for the construction of St. Luke's Church on Hudson Street.  But when Clement Clarke Moore decided to parcel off his family's summer estate, Chelsea, in the late 1820's, Wells became his property manager.
In 1831 construction began on a house and store at the northwest corner of Ninth Avenue and West 21st Street for a "Mr. Royer."  Completed the following year, it was two-and-a-half stories tall and faced in red Flemish bond brick.  In the rear was an ample yard with a small wooden house.
Wells purchased the property soon afterward and is listed as living here with his family in 1833.  It was a temporary arrangement while he constructed a grand brick residence nearby at 414 West 22nd Street.   When he moved out in 1835, he leased the street level shop to Theodore Martine's feed and grocery store.   Wells did not totally leave the building.  City directories indicate that Wells moved his real estate office into the upper portion, above the store.
Theodore Martine had entered the grocery, flour and feed business in 1826.  In the mid-1840's the Board of Aldermen relied on his expertise to examine the goods provided to the Alms House and other institutions.  On the afternoon of New Year's Eve, 1845, for example, he looked over 20 chests of tea (finding that "one fell short two pounds"), "several hogsheads" of molasses, a delivery of muslins, and 20 boxes of soap.  He found soap missing from some of the boxes, tampering of the molasses barrels, and a portion of the tea "worthless." 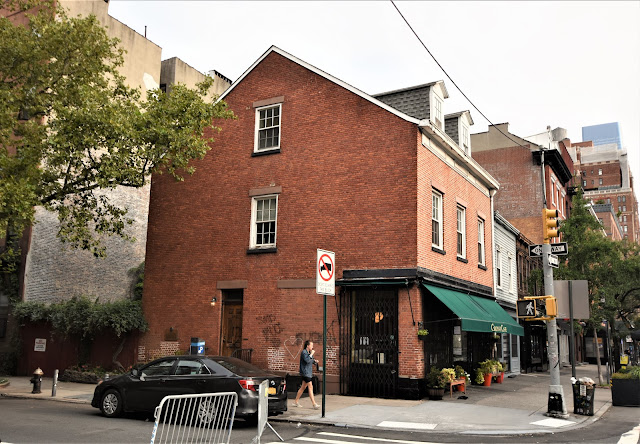 Martine operated his store from 159 Ninth Avenue (renumbered 183 in 1868) until 1850.  His son Randolph B. Martine would go on to become the new District Attorney in 1885.  In reporting on his new position Frank Leslie's Illustrated Newspaper would comment, "His father, Theodore Martine, will be remembered by old citizens of the West Side as an extensive grocer and real estate dealer."
The store next became home to the Vanvalkenburgh & Martin grocery store.  John A. Vanvalkenburgh and his family lived above the store while his partner Joseph T. Martin lived nearby at No. 147 West 21st Street.
In 1856 John A. Vanvalkenburgh and moved his produce business to Washington Market and his son, John J. Vanvalkenburgh partnered with Benjamin Haviland to continue the store here.  They operated it as Vanvalkenburgh & Haviland grocers.  That partnership lasted until 1860 when Haviland opened his own store on Fourth Avenue.  John Pierson ran the grocery here until at least 1862.
The grocery store continued to change hands.  In 1864 and '65 it was run by George A. and Joseph T. McDowell, and beginning in 1867 it was called the Browning & Berry grocery, run by Lewis F. Browning and James E. Berry.  Interestingly, the partners lived next door to one another at 160 and 162 Ninth Avenue.
Households in the middle of the 19th century depended heavily on lighting oils like kerosene for lamps.  These were generally a staple found in neighborhood grocery stores like Browning & Berry.  In the winter of 1869 proprietors were surprised by agents of the Metropolitan Board of Health who took samples of the kerosene-oil as well as lamps they were selling for testing.  Unfortunately for Browning & Berry, their kerosene was deemed "below Legal Standard."
James N. Wells died in 1860 and in 1865 his family sold the property.  It was purchased by Levi L. Livingston.  He was a decorative painter, responsible for murals and painted interior decorations of public and private buildings, including the Masonic Temple on 23rd Street and Sixth Avenue. Instrumental in organizing the Association of Master Painters of which he was president several times, Livingston had “heavy contracts for painting the North River steamers and the elevated railroads,” according to The New York Times.After his death in 1882, his estate continued to maintain the property until finally selling it in 1910; advertising the house as a “three story tenement and store.”
In the meantime, as had been the case with Vanvalkenburgh & Haviland, Browning & Berry dissolved in 1871 when James Berry opened a store on Fourth Avenue.  Lewis F. Browning took in a new partner, Albert H. Siemers, who lived next door at No. 185.  They would operate the grocery here until at least through 1880.
By 1889 the store was run by Clamor L. Magna.  He lived upstairs, taking in three grocery clerks as boarders at the turn of the century.    He would remain in the space into the early years of the 20th century. 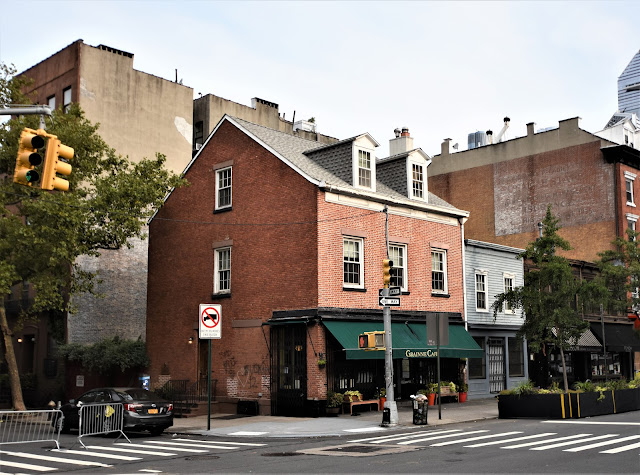 Most of the 20th century was unkind to this section of Ninth Avenue, with the clattering elevated train running down its center.  At one point 183 Ninth Avenue was divided into apartments, but in 1993 as Chelsea was rediscovered, it was purchased by attorney Steven Shore.  He hired architect Stephen B. Jacobs who restored the storefront and created a single residence on the upper floors.  The Wells house is the second oldest house in Chelsea.
photographs by the author
LaptrinhX.com has no authorization to reuse the content of this blog
Posted by Tom Miller at 1:11 AM