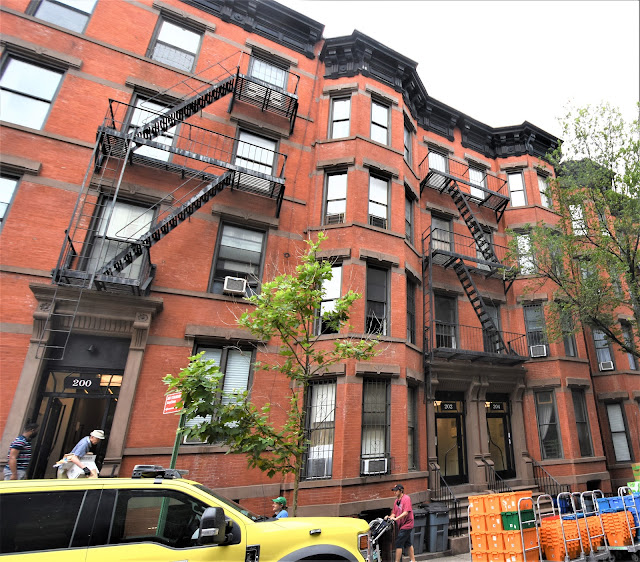 Surprisingly, when the architectural firm of Thom & Wilson filed plans for a row of six flat--or apartment--buildings for developer Selig Steinhardt in 1880, they did so in three parts.

One set of plans for "two four-story brick apartment houses" was filed on August 27; and almost a month later, on September 24, two additional sets of plans were filed--one set for a single building and the other for four.  The dimensions of the structures seem to have prompted the separate plans.  The corner building, 200 West 83rd Street, was a commodious 27-feet wide, the original pair were 20-feet wide, and the four others were 19-feet wide. 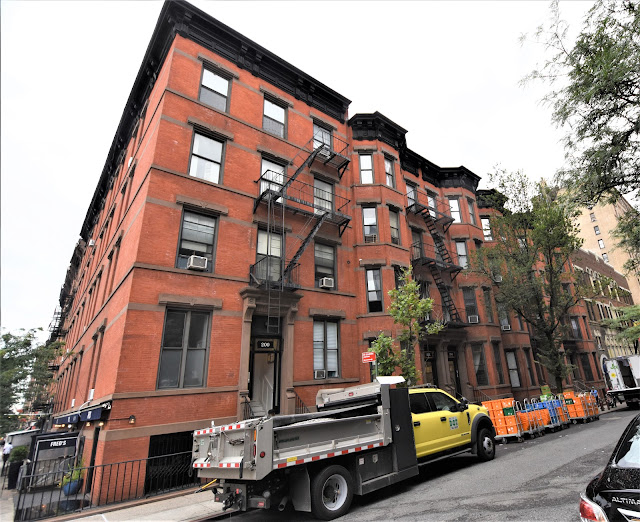 The corner building was significantly wider than its peers.
Completed in 1881 the handsome buildings were designed in the highly popular neo-Grec style.  Faced in red brick and trimmed in brownstone, they formed a uniform presence despite their slightly varied widths.  The neo-Grec style focused on sharp angles and geometric design.  The entrances, above stone stoops, nestled within crisply angled bays that caught passing breezes during sultry summer months.  The window lintels at each floor, carved with incised decorations, were connected with a continuous brownstone bandcourse.  Angular brackets supported the pressed cornices. 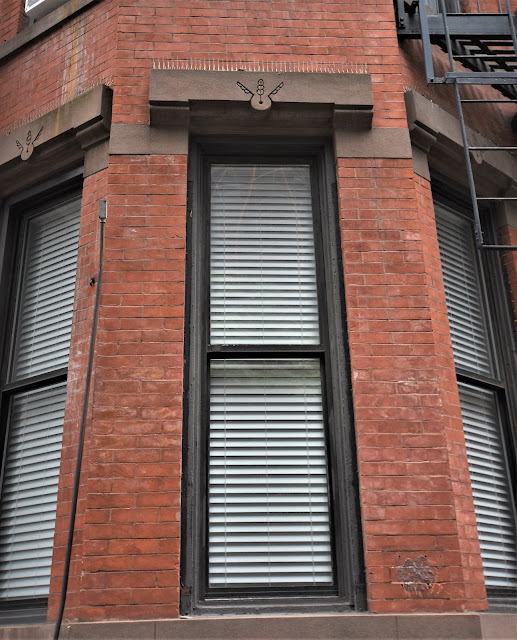 Delicate incised decorations, typical of the neo-Grec style, adorn the lintels.
Construction cost between $9,000 for the narrowest buildings to $15,000 for 200 West 83rd Street (just under $400,000 for the latter in today's money).  There were two apartments per floor, each with eight rooms and a bath.  Tenants would enjoy state-of-the art amenities like hot water, steam heat, electric lights and an elevator.   Noticeably absent were services like hallboys, found in more upscale apartments.
There were two store spaces in the corner building, along Amsterdam Avenue.  The smaller space at 470 Amsterdam was home to Christian Solz's grocery store at the turn of the century while 476 Amsterdam Avenue housed Bibbo Gaetano's shoe store. 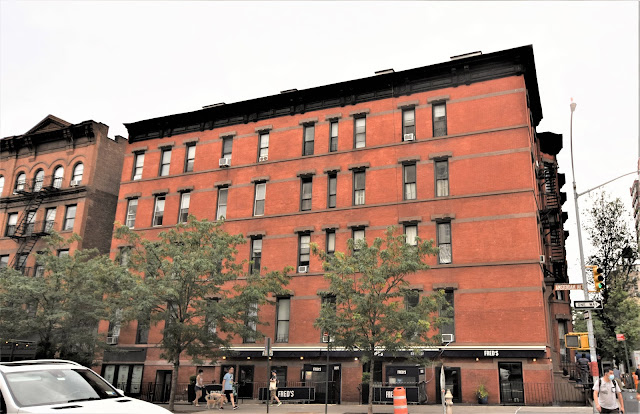 The apartments filled with professional, financially comfortable tenants.  Economist and author James Lewis Coweles and his artist wife, Edith V. Cowles lived in the corner building.  Cowles focused his work on postal reform and the railroads, steadfastly pushing for Federal ownership of the railroads.  Edith had studied art in Paris.  She illustrated books, doing the illustrations, for instance, in an edition of Hawthorne's House of the Seven Gables and Emerson's Friendship.  She designed five stained glass windows in St. Michael's Church in Brooklyn.
Next door at 202 from around 1901 through 1909 lived author and lecturer Maria Parola.  Born in Massachusetts in 1843, she was the author of books on cooking and housekeeping, such as The Young Housekeeper.  She lectured on food and pioneered "domestic science" (today called home economics).  Parola is often deemed America's original celebrity chef.
The family of retired businessman John Krell lived in 208 West 83rd Street at the time.  He and his wife, Helen, had two sons, Virgil and Kenyon.  Although technically retired, Krell was "lately interested in moving-picture shows," according to The New York Times in 1912.  The couple's finances caused extreme tension in their marriage, a situation which came to a climax on June 11, 1912.
That day Krell shot himself.  He took out his resentment against his wife in his will, which left her $100.  The Evening World reported, "The bulk of the estate, said to be quite a large one, is left to two sons of the dead man."  Lest anyone wonder why he had snubbed Helen in his will, Krell made it brutally clear:

I make only this provision for the reason well known to her and to my friends also, that during our married life she was willfully extravagant and wasteful, and brought me much unnecessary suffering.

He went further by, essentially, posthumously removing the custody of the boys from his wife.  The Evening World explained, "The executors are requested to send them to a military school and then to college.  The military academy, the will declares, is more competent to care for the boys than 'any individual.'"
For the most part, the respectable residents went about their business drawing no untoward attention to the buildings.  A notable exception was Italian-born Alfredo Cocchis, who lived in 202 West 83rd Street with his wife, Maria.   Cocchis operated a motorcycle repair shop at 542 West 127th Street and among his customers were the district's motorcycle policemen.
Alfredo Cocchis had a dark side, one which his wife was fully aware of.  Maria later admitted that her husband was attracted to underage girls and in the fall of 1916 she stopped visiting the repair shop "because of his attention to girls."  She said that he had carried on a months-long affair in 1914 with a 14-year old girl, the daughter of a baker named Propst, who lived in their apartment building.   On June 20, 1917, according to The Standard Union, "On one occasion, said Mrs. Cocchi, she opened a letter her husband had written to [the Propst girl] and found $25 in cash."  (It was a significant $650 gift to a teen in today's money.) 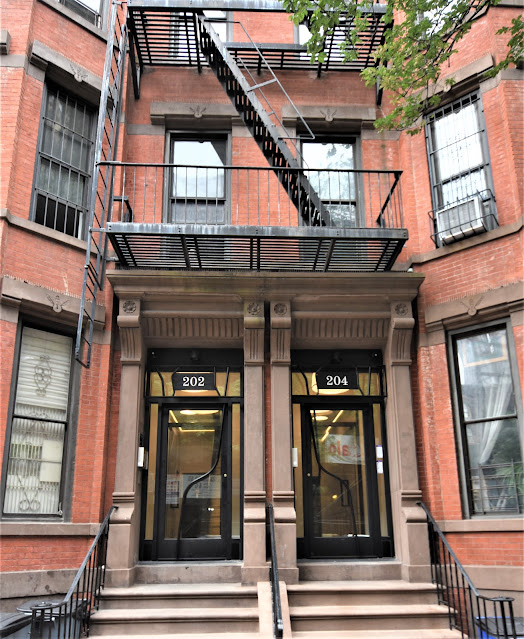 The Cruger family lived in an apartment near the motorcycle repair shop.  Ruth Cruger was 18 years old and a Sunday School teacher and church worker.   She left the apartment on February 13, 1917 never to return.  A search was launched, and quickly neighbors pointed fingers at Cocchi.  The Standard Union reported, "Then came stories that showed that the...mechanic had laid lustful eyes and hands on girls that had entered his shop on business.  One mother told the police that while looking out of the window of her home opposite the Cocchi store she saw Cocchi handle her daughter in such a manner that she rushed from her house and into the store to rescue the girl."
Days after Ruth disappeared, so did Alfredo Cocchis.  Police searched the repair shop and found no evidence of foul play.  Maria was grilled "for seven hours without any great information being obtained," said a newspaper.   But then four months later police decided to excavate the cellar of the shop.   After days of investigation, Ruth's body was found buried ten feet below the concrete flooring.  "There was a jagged hole in her skull," reported The Standard Union.  Buried with her were the blood-stained clothing Cocchis had worn.
Maria went to police when she received a letter from her husband in which he said he had had Easter dinner with his relatives in Italy.  Police attempted to have Cocchis extradited to New York, but Italian officials refused, insisting on trying him there.  He was convicted of Ruth's murder on October 30, 1920 and sentenced to 27 years in an Italian prison.
Back on West 83rd Street another widely-publicized court case was taking place.   Anna Carliess had an apartment in 208 West 83rd Street.  On October 10, 1918, the 72-year-old visited her daughter, opera singer Charlotte Carliess, on Riverside Drive.  Charlotte never heard from her mother again after she walked out the door.
She could not have known that only a few minutes after leaving, Anna was struck and killed by a taxicab.  R. J. Kelly was the insurance adjuster for the Terminal and Town Taxicab Company.  He claimed the body at the morgue, signing the death certificate as Anna's son-in-law and nearest relative.  He then rushed it to the funeral home of George H. Kelly on Columbus Avenue.   The taxicab company paid Kelly the $75 fee to have the body buried within 36 hours of her death. 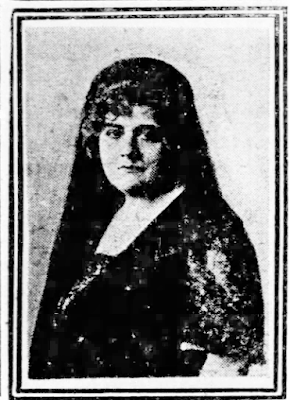 Charlotte Carliess, Daily News, December 12, 1919 (copyright expired)
Charlotte filed a missing persons report for her mother, only to discover that she was not only dead, but had been hastily buried without the permission or knowledge of any family member.  She ordered the body exhumed, telling reporters she wanted "to prove beyond a doubt that [the body] is contained in the coffin."
The exhumation showed that, indeed, Anna Carliess was buried in the coffin, however The Evening World reported, "the undertaker had merely shoved the body" into a "crudely made pine box."  And the New-York Tribune noted "Mrs. Carliess had been buried without embalming."  Charlotte subsequently gave her mother a proper, respectable burial.
The two highly-publicized cases were stark exceptions to the normal lives of the residents.  Throughout the subsequent decades the tenants continued to be respectable white collar professionals.
The occupants of the Amsterdam Avenue stores reflected the changing demographics of the neighborhood.  In the early 1970's the Greenhouse Co-Op, part of the current organic food trend, occupied 470 Amsterdam Avenue.  It was a much different grocery store than the one Christian Solz had operated in the space seven decades earlier.  The New York Times reported on September 7, 1970 "Members go there on Tuesday to order and pick up their organic produce, which, while more expensive than a supermarket's, sells for considerably less than that available in health food stores."
The corner store was home to My Share Antiques until 1988, when it was replaced by The Shark Bar.  Upon its opening in February, the Daily News wrote, "The Shark Bar, in its own way topically tropical, boasts celeb visitors like Ryan O'Neal and Farrah Fawcett (friends of the owners, don't you know).  It's as popular as any new spot on the Upper West Side could possible be."  Since around 1997 Fred's restaurant has been in the space. 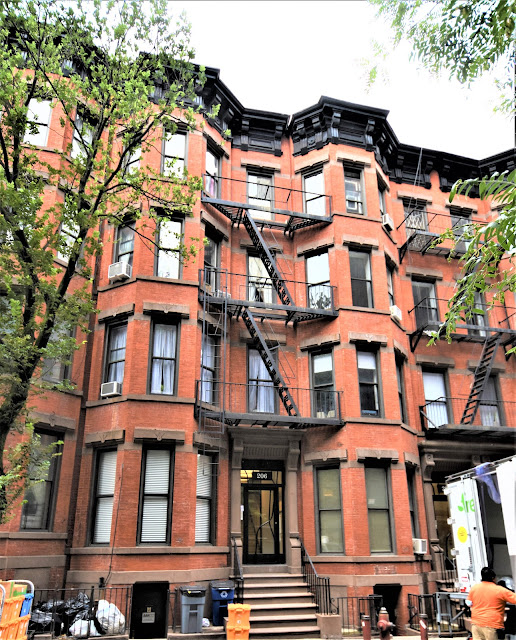 A renovation of the apartments and a restoration of the facades were recently completed by Smith & Architects.  The original plan of two apartments per floor was retained.  Other than replacement windows and entrance doors (with abstract floriform metal decorations), Thom & Wilson's brick-and-brownstone flats look much as they did in 1881.
photographs by the author
no permission to reuse the content of this blog has been granted to LaptrinhX.com
Posted by Tom Miller at 1:08 AM