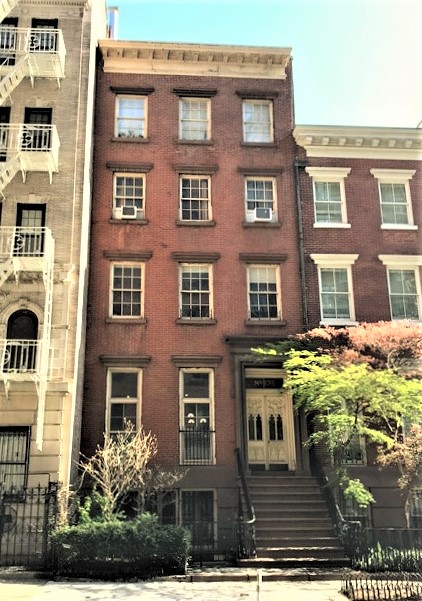 The house was originally three stories, like its former twin to the right.
In 1828 Elizabeth Walsh purchased land on the northern fringe of Greenwich Village from John Rogers.  It was not until 1851, when the hamlet's expansion fully reached the property, that her heirs erected a row of townhouses on the West 12th Street property between Sixth and Seventh Avenues.  The identical 22-foot wide homes were faced in red brick and trimmed in brownstone.  Three stories tall above English basements, their Greek Revival design included eared entrance frames (a motif which actually found its roots in Egypt rather than Greece).  The parlor windows, which extended to the floor, were almost assuredly fronted by a cast iron balcony.
Quite surprisingly, the entrance doors departed from Greek Revival altogether.  Designed in the Gothic Revival style, their open, central pointed arches provided light to the foyer. 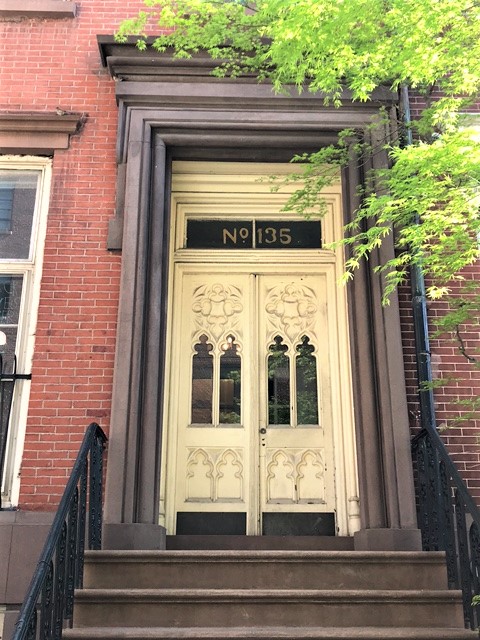 No. 55 (renumbered 135 in 1868) became home to the Max Heidelbach family.  Born in Germany, he was partner in the dry goods firm Heidelbach, Frank & Co.  He and his wife had an infant son, Alfred Samuel and in 1855 a second child, Emma, was born.
Like all the well-to-do families along the block, the Heidelbachs employed a small domestic staff.  Henrietta placed an advertisement in the New York Daily Herald on September 13, 1859 that read:

Wanted--A German girl, who speaks her native language correct, and is a good seamstress, to take care of a girl four years of age.

Affluent New Yorkers routinely traveled abroad and on May 6, 1863 the family boarded the steamship Persia for England.  The New York Times listed among the passengers "Mr. and Mrs. Max Heidelbach, two children and servant."
Around 1868 the family moved to West 39th Street, but retained possession of the West 12th Street house.  They leased it first to Herman Vonkeller, an importer, and then in 1870 to Anthony F. Schwab.
Like Max Heidelbach and Vonkeller, Anthony F. Schwab was German, born in Frankfort-on-the-Main.  He was a merchant and his son, Frederick A., was a well-known theater critic.
Frederick's critiques appeared in publications like Music & Drama and The Theatre.  He translated French plays into English, as well.  He later became a staff member of The New York Times.  In 1885 the Musical News said of him and three other journalists, "These are the only critics worth talking about.  The four papers which they represent are the only ones which print criticisms.  The rest print drivels of idiocy."
Anthony F. Schwab died on April 25, 1871 at the age of 63 and his funeral was held in the house three days later.  The Schwab family left West 12th Street shortly thereafter.
The house was next leased to artist Henry W. Rover and his wife, the former Polly Ann Knapp.  The couple had two children, Ann Louisa and Cornelia Knott.
There would be two funerals in the house during the Rovers' residency.  Mary A. Maitland, a niece of Rover, died on October 2, 1876.   Her funeral was held in the house on October 5.  Three years later, on January 13, 1879, Polly Ann died of pneumonia at the age of 65.  Her funeral was held three days later.
In the meantime, Max Heidelbach had died on August 7, 1875.  A year after Polly Rover's death, on February 25, 1880, the Heidelbach heirs sold No. 135 to George F. Garlock.  He paid $13,000 for the house--about $335,000 in today's money.
Garlock was a tea merchant.  His business was located at No. 66 Pearl Street.  He enlarged the house by adding a fourth floor.  His architect carefully matched the original lintels and duplicated the cornice--if not actually reusing the original.
As the Heidelbachs had done, after the turn of the century the Garlocks leased the house to various tenants.  Its most significant occupant came in 1911 when The Aero Club Italiano moved in.  Aero magazine reported that the club "opened its rooms at 135 West Twelfth street, New York, Saturday, December 9.  The ceremonies began at 8:30 in the evening."
Since the Wright brothers' successful flight in 1903, a mania for aircraft had swept the nation, with "aero clubs" popping up in major cities.  As its name implies, this one catered to Italian-American members.  On March 14, 1912 Aircraft magazine noted, "The Aero Club Italiano, U. S. A., who have their headquarters in New York and already boast of 64 active members, gave a ball at the Murray Hill Lyceum."
The club seems to have remained until 1922 when the newly organized 135 West Twelfth Street, Inc. purchased the house in April.  It was converted to "non-housekeeping apartments," meaning there were no kitchens.
It was not the end of clubrooms in the building, however.  On November 21, 1922 the New York Herald reported that the Marshall Chess Club "will formally open their new clubhouse this evening with a housewarming at No. 135 West Twelfth street.  United States Champion [Frank J.] Marshall will return from Kingston for the occasion, and invitations have been issued to a number of other notables, including Jose R. Capablanca, the world's champion, and the presidents of the leading metropolitan chess clubs."
The Marshall Chess Club was (and is) the second oldest chess club in the country.  The clubrooms were routinely the site of well-publicized contests.  On December 22, 1922, for instance, The New York Times reported, "Cornell, Pennsylvania, City College, New York University and the Massachusetts Institute of Technology will meet for their annual chess tournament at the rooms of the Marshall Chess Club."
The club was the scene of a much different event on January 6, 1930.  The Brooklyn Daily Eagle reported, "Frank J. Marshall, chess champion of the United States since 1909 and for the past 30 years America's international representative, will tomorrow celebrate the 25th anniversary of his wedding.  There will be an information gathering of his friends at the Marshall Chess Club, 135 West 12th st., to greet Mr. and Mrs. Marshall on the occasion of their silver anniversary."
The club left in 1931 and No. 135 continued to house small apartments until a renovation completed in 1977 resulted in a duplex in the basement and parlor levels and two apartments each on the floors above.
Outwardly, the house appears little changed since George F. Garlock raised the roof in the 1880's.
photographs by the author
no permission to reuse the content of this blog has been granted to LaptrinhX.com
Posted by Tom Miller at 1:13 AM