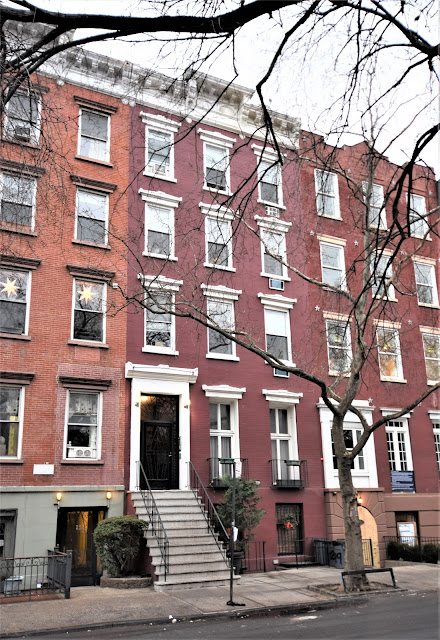 Architect and builder Joseph Trench was highly active along the block of East Tenth Street facing Tompkins Square in the 1840's, almost single-handedly filling the block with high-end houses.  Around 1846 he completed No. 299 East 10th which, like the other Trench-designed homes on the block was designed in the Greek Revival style.  Faced in brick and trimmed in brownstone, it was originally three-and-a-half stories tall.

In 1847 it was home to James Scott Aspinwall, a partner in the large drug firm of Rushton & Aspinwall at No. 86 William Street.   Born in New York City in 1807, he and his wife, the former Margaret Maxwell, had two sons at the time.  Richard Irvin was two years old and Annie was one.   (Another son, born in 1844, had died in infancy.)  There would be four more children, Francis Berger, Mary Alice, James Lawrence, Eliza Maxwell, and Robert Maxwell.
Writing in his 1863 The Olde Merchants of New York City, Walter Barrett said of Rushton & Aspinwall, "For years the concern did an immense business, both wholesale and retail."  He described Aspinwall by saying, "A more methodical man or merchant never existed.  I do not think he was ever sick or absent a day from his business from the cause since he commenced it."  Moses Yale Beach estimated Aspinwall's fortune at $100,000, or more than $3 million today, in his 1855 book Wealthy Men of New York.
The Aspinwalls were followed in the house by the family of Max Rolland, a partner with his brother Adolph in the A. & M. Rolland hops business.  By 1862 the Rollands were leasing rooms to the family of Judah Abrahams, a dry goods merchant.  The Abrahams's 15-year-old son, Samuel, was attending Public School 40 in that year.  They would live in the Rollands' house at least through 1865.
Max Rolland sold No. 299 to banker Louis J. Offenbach in 1868.  Sons Louis and David were brokers by 1872.  The family's residency would be relatively short.  In 1873 James Wissing was operating No. 299 as a respectable boarding house.
An advertisement in the New York Herald on September 30, 1874 offered:  "To Let--Two rooms and two bedrooms, on third floor; rent $18 per month; possession given at once; reference required.  J. Wissing, 299 East Tenth street."  The monthly rent would equal about $417 today.
Higher end boarding houses accommodated only a few residents.  In 1876 Wissing leased rooms to just two families, those of Richard Armstrong and of attorney Richard M. Clute.  Armstrong ran two nearby grocery businesses, one on Avenue A and the other on First Avenue.
There was some excitement in the house the following year.  Jane Lawler fell seriously ill and was taken to the hospital on February 9, 1877.  Relations between her mother and husband seem to have been strained.  The New York Herald reported, "Her mother charged that the woman had been poisoned by her husband."  Jane was carefully examined and no trace of poison could be detected.  She was diagnosed with pneumonia.  The incident no doubt was fodder for interesting dinner table conversation among the other boarders.
In 1893 architect Louis F. Heinecke was commissioned to make significant renovations to the house.  The roof was removed and the upper story raised to a full fourth floor.  An ambitious Queen Anne style cornice--more expected on a commercial building--was installed, and cast iron earred lintels were added above the windows. 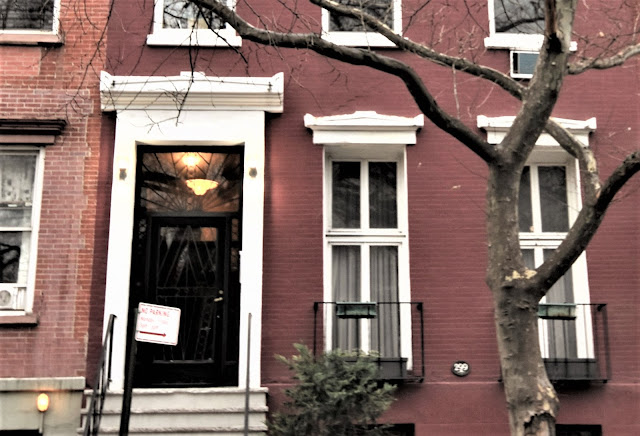 The cast iron lintels, interestingly, drew from Greek Revival designs appropriate to the period of the house's construction.
The renovated dwelling continued as a boarding house.  Among the residents in the spring of 1896 were Edward and Annie Willard, and two-year-old Helen from Edward's previous marriage.  Annie received an extortion note from her husband's former wife who said she would "make trouble about Helen," indicating that she would sue for custody of the child.  That trouble could be avoided by paying $1,000--a princely sum of nearly $31,500 today.
When the money was not forthcoming, Mary J. Willard made good on her threat and sued for custody.  She apparently expected the subpoena to prompt her former husband to pay.  But instead, the three of them met in court on April 30, 1896.
The New York Herald reported that Annie carried the child into the courtroom.  "The little one was neatly dressed, and had bright blue eyes and soft, brown hair."  Mary surprised those in the room by her indifference.  "The mother, who is an attractive young woman, seemed to pay no attention to the child."
She further shocked the spectators when she addressed the judge, saying she it was not Helen she wanted, but money.  "Your Honor, I don't want the child now, I cannot support it.  It is my child, but the father is married to this woman.  He took the baby with him when he married her.  I thought the father would be compelled to support the child."
The judge dismissed the case, since Mary had openly confessed she could not support the girl.  But then Annie let him know about the $1,000 demand, saying "I cannot pay any such sum; I am not able to."  He assured her that "such a thing was not necessary, and that she would have no further trouble," reported the New York Herald.  Annie carried Helen out of the courtroom.  "The mother of the child went out at the same time, but made no attempt to even caress it," concluded the New York Herald article.
A renovation completed in 1935 resulted in one apartment per floor.  The stoop was removed at the time and the entrance lowered to the former basement level. 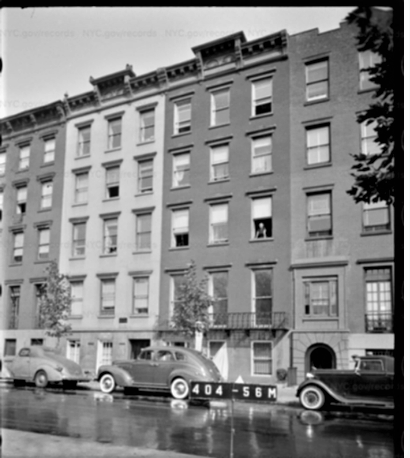 photo via the NYC Dept of Records & Information Services
Among the early tenants in the renovated building were the Ruedi family.  Sophie was listed as the head of the household in 1940, along with her sons 23-year-old Ferdinand and 29-year-old George.  The apartment was large enough that they took in a "lodger," 88-year-old Emma Gettinger. 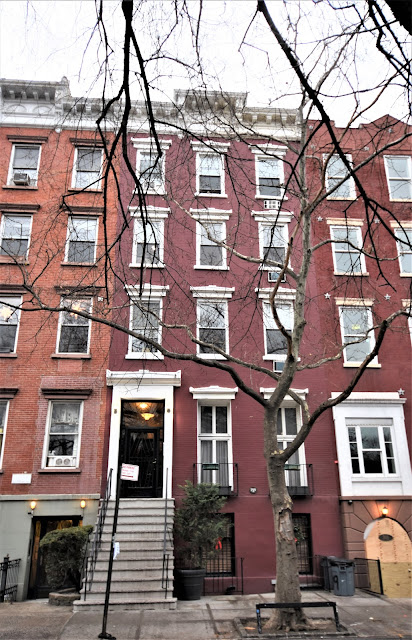 A subsequent renovation-restoration completed in 1979 rebuilt the stoop and entranceway.  There were now three residences in the building, a duplex in the basement and parlor level, one apartment on the second floor, and a duplex above that.
photographs by the author
LaptrinhX.com has no authorization to reuse the content of this blog
Posted by Tom Miller at 1:45 AM