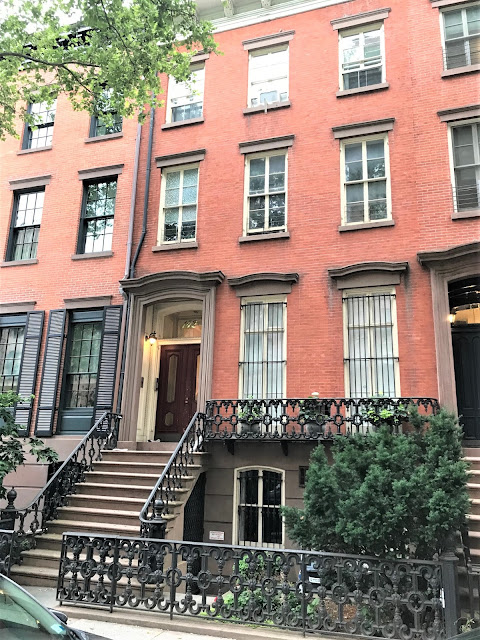 In 1854 Linus Scudder, a well-known Greenwich Village builder, teamed with a number of other men in the construction trade to erect a row of eight upscale residences along the southern side of West 11th Street, between Sixth and Seventh Avenues.  Completed in 1855, the identical houses were 22-feet wide and three stories high above a tall English basement level.   The entrances wore elliptically arched cornices rather than the more expected foliate-bracketed pediments.  The full-height parlor windows were given the same treatment.  Each house had elaborate areaway fencing which morphed into stoop gates--a rather unusual element.  Matching ironwork formed the stoop railings and the full-width parlor balconies.
In 1861 142 West 11th Street became home to the Dr. Isaac John Greenwood family.  Greenwood was a dentist and his son, Isaac, Jr., was a "chemist," or pharmacist.  They came from a long line of Greenwoods and dentists.  Nathaniel Greenwood had arrived in Boston about 1650.   His grandson, Isaac Greenwood II listed his occupations as "mathematical instrument maker, wood and ivory turner, umbrella manufacturer and dentist," and made sets of false teeth in the years prior to the Revolution. 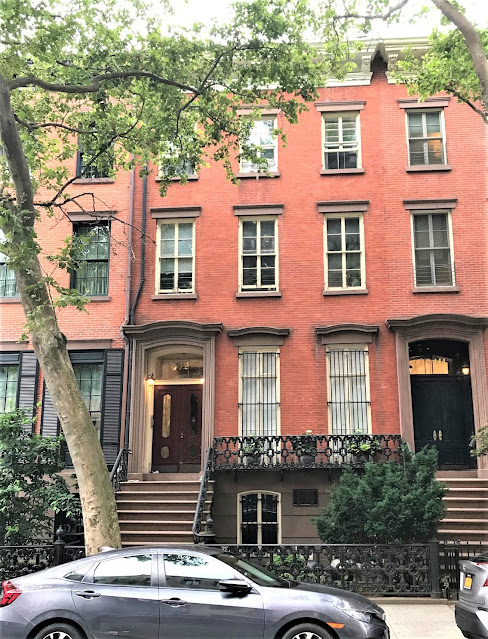 The Connolly house was purchased by Jacob Huyler, who owned numerous investment properties in the city.  It now became an upscale boarding house.
Annie C. Allis, whom The Evening World described as "well known in uptown circles," took rooms after her husband, Edmund E. Allis left her in 1888.  At the time the couple had been married just two years, but according to her, he told her "he had grown tired of her."  After some sleuthing, Annie Allis discovered that he had run off to Indianapolis "with a young woman of this city," and was living as H. E. Alden.  The Evening World reported, "When Allis learned that his wife had discovered his whereabouts, he left Indianapolis and has not been heard of since."  Annie was eager to find him in order to contest the "secret divorce" he was reportedly pursuing.
By January 1890 Nellie McCance had rooms here.  The New York Sun described her as "a pretty young woman who is learning the art of dressmaking in Prof. Livingston's art school on Broadway."  She was on her way to class on January 15 when 18-year-old Henry Hansome snatched her pocketbook containing $10--just under $300 today.  He was quickly apprehended by a policeman and in the Jefferson Market Court said "he took it because he was hungry."  The teens' parents, he said, had "put him out."  Hansome was held for trial.
Jacob Huyler died on April 2, 1889.  His son, John S. Huyler retained possession of the house until 1900 when he traded it and another Manhattan property to Mrs. James Cunningham for her 26-acre country home, Cunningham Castle, at Irvington-on-the-Hudson.  The sale did not change the status of the boarding house.
Among the tenants at the turn of the century were Silas H. Jessup and his wife.  Jessup was one of the oldest members of the Produce Exchange.  Born in 1812, he had come to New York City at the age of 18.  He had been in the malt business, but retired around 1896.
Also living here were Cortlandt H. Van Rensselaer and his wife Mary.  Despite their old and prestigious surname, the couple was upper-middle class.  In 1890 they purchased a farm in Seneca Falls, New York.  But the venture did not go well.  The New-York Tribune reported on February 18, 1900 that they "have filed a petition in bankruptcy with liabilities of $2,530 and no assets."
Martha Parke Hofer, the widow of Anthony V. Hofer, and her daughter Elizabeth J. Hofer, lived here by 1903.  A member of the American Historical Society, Elizabeth was principal of P.S. 174 on Attorney Street downtown.  Martha died here at the age of 85 on February 27, 1904 and her funeral was held in the parlor two days later.
Mrs. Louisa Bardousch purchased the house in February 1908.   She sold it in November 1917 to William J. Farrell for $20,000--just under $400,000 in today's money.  He quickly leased it to John Haupt who hired architect Ferdinand Savignano to update the house.  The extensive interior alterations cost about half as much as what Farrell had paid for the property.
Respectable boarders continued to call 142 West 11th Street home, like Alexis I. duPont Coleman, here in the 1920's.  Educated at Oxford University, he was a professor of English at the City College of New York and a free-lance journalist.  The Evening Journal of Wilmington, Delaware, said "He contributed for a number of years to The Critic and was internationally know for his contributions to literature through magazines, newspapers and an encyclopedia."
A renovation completed in 1951 resulted in an apartment in the basement, a doctor's office on the first and second floors, and a total of three apartments on the third floor and new fourth floor level (unseen from the street).
On May 23, 1968 The Villager reported that Mr. and Mrs. Theodore H. Story had purchased the house for the equivalent of $808,000 today.  The article said they "plan to reside there."  Mrs. Story was cabaret singer Cynthia Crane and her husband was playwright Ted Story.  The couple initiated another renovation, completed in 1974, which resulted in a duplex in the basement and parlor level, one apartment on the second floor, two on the third, and one on the fourth.
Unfortunately, the Storys were forced to sell 142 West 11th Street "after losing their life savings to Bernard L. Madoff," according to The New York Times on September 7, 2011. 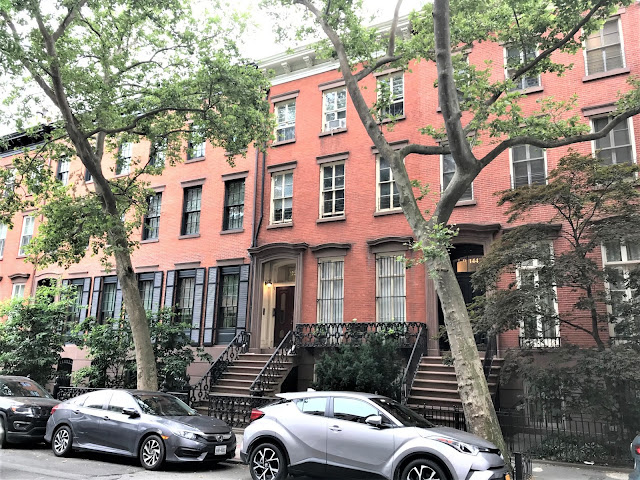 The handsome home where one of New York City's most horrific tragedies occurred is outwardly little changed after more than 165 years.
photographs by the author
no permission to reuse the content of this blog has been granted to LaptrinhX.com
Posted by Tom Miller at 1:53 AM