On February 19, 1885 fire broke out in the six-story factory of the Marvin Safe Company at No. 326 West 37th Street at around 2:40 in the morning.  A second, then a third alarm was called as "there were prospect of a serious conflagration," as explained by The New York Times the following morning.  When the blaze was finally extinguished, the building was in ruins.  One week later Building Inspector D'Oench ordered the "razing of the walls."


Owner Willis D. Marvin wasted no time in laying plans for a new factory.  He purchased the properties at Nos. 88 through 92 South Fifth Avenue, running through the block to Nos. 136 to 144 Thompson Street and hired architect Oscar S. Teale to design a "six-story brick and iron factory."  Teale's plans, filed in June that year, placed the cost of construction at $65,000--about $1.65 million today.

The Marvin Safe Company was firmly established as a leading player in the industry.  Its safes--ranging from relatively small office-sized models to gigantic vaults--were well-known for protecting their contents from fire.  The large headquarters building would house a multitude of departments--manufacturing, painting and stenciling, offices and salesrooms.   Because of the elevated train that ran down the middle of South Fifth Avenue, Teale placed the showrooms on the second floor--visible to passengers--while less noticeable ground floor retail space would be leased.

Oscar S. Teale was educated at Cooper Union, graduating in 1866, and had worked with several architectural firms, including the offices of J. Cleveland Cady and Lamb & Rich.  But it is not his professional successes for which he is best remembered, but for his avocation--magic.  Teale was an amateur magician and a close friend of Harry Houdini.  He would go on to write books on the subject, including his Higher Magic: Magic for the Artist.  Not only did he design Houdini's magnificent monument in Machpelah Cemetery in Queens, New York; but he served as a pallbearer at the funeral.

Teale's completed Marvin Safe Company building was six stories of red-orange brick trimmed in stone and cast iron.  The Romanesque Revival tripartite design kept the visual weight low.  The hefty three-story base was dominated by three soaring arches where rough-cut stone courses decorated the piers.  Unexpected neo-Classical elements appeared in the delicately festooned panels that defined the second and third floors, and the elegant scrolled keystones draped with garlands.  The spandrels of the arches were filled with lacy cast iron decorations. 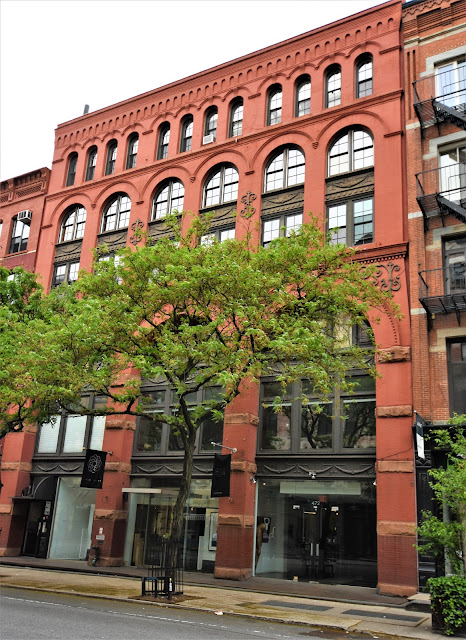 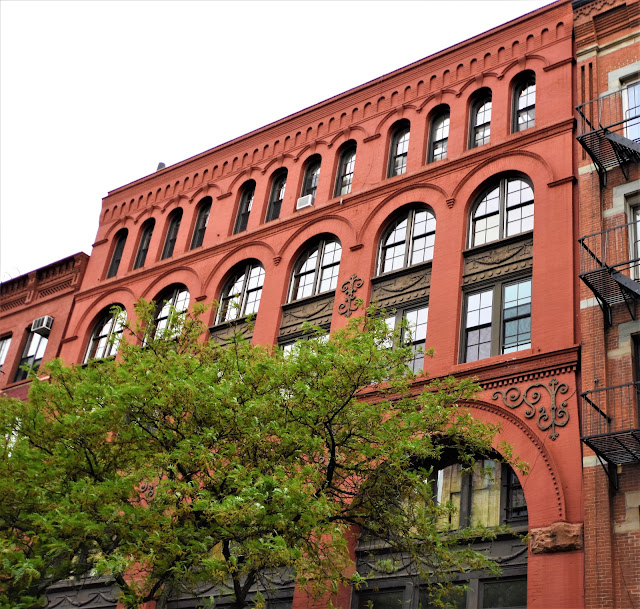 The ground floor was leased to the C. & C. Electric Motor Company.  The Iron Age, in 1888, explained "They manufacture electric motors from one-eighth horse-power up for general manufacturing and mechanical purposes."

In describing the effect of the elevated railroad on businesses later, real estate operator Victor Levy noted that the second floor showroom was an advantage for the firm.  "The Marvin Safe Company building don't have their salesroom there, it is a kind of show room for advertisement for the elevated railroad.  It is a big advertisement.  It is an improvement for them."


More than 250 employees--all male--worked in the factory.  Their grueling jobs were not pleasant.  In the spring of 1886 they walked out, demanding better wages and more humane working hours.  A compromise was achieved on May 5 with Marvin Safe Company agreeing to reduce hours of labor "to nine hours on five days of the week and eight on Saturday."  They refused to increase wages, however, except in the case of "17 men in the ironworking department, who will receive an advance of $1 a week."


The Marvin Safe Company was understandably sensitive about the reliability of its product.  So management was apparently infuriated when The Evening World erroneously reported that one of its safes had been broken into in the offices of William E. Chamberlin.  On March 3, 1889 a retraction explained that the safe "was made by a Pennsylvania house, and this statement is made in justice to the Marvin Safe Company, whose safes are not considered as favorite objects of attack on the part of the enterprising burglar."

Not all of the Marvin Safe Company's employees worked in the factory.  A crew was required to deliver and install the safes which weighed thousands of pounds.  It was a job not without its dangers.

In 1892 a five-ton safe was delivered to the seventh floor of the Hays Building at No. 21 Maiden Lane.  The elevator suddenly jerked upward, sending a worker plummeting down the shaft, killing him instantly.  And on April 30, 1894, as workmen were hoisting a 5,000-pound safe through the elevator shaft to the 12th floor of No. 68 Nassau Street, one of the cog wheels of the windlass broke.

The Times reported "The safe fell to the stone floor at the bottom of the shaft with such force as to shake the surrounding buildings.  Frank May, one of the workmen, was struck by flying pieces of the windlass.  His arm was dislocated and he received severe contusions on the leg...John Burke, who rode up on top of the safe, jumped to one of the floors just in time to save himself."

In the spring of 1895 the City embarked on a project of widening and extending College Place.  By cutting the street through existing blocks it would form a connection to West Broadway and South Fifth Avenue--one continuous thoroughfare from Dey Street to Washington Square.  Businessmen like Willis Martin predicted confusion.  He joined others in a petition to the mayor on March 18 suggesting "the entire street should be given the name of West Broadway for its entire length."  The idea was well received and the Marvin Safe Company building received the new address of Nos. 468-472 West Broadway.

The title to the West Broadway building was in the name of Marvin's wife, Lilla.  In March 1899 plans for $1,200 in improvements were filed under her name.  The quiet updating may have been in preparation for the inevitable leasing of the factory space.  The improvements seem to have included the automatic sprinkler and fire doors soon touted in loft advertisements.

On November 25, 1899 The New York Times reported that United States Judge Kirkpatrick had denied an application "for permission to sell and dispose of the plant and stock of the concern."

In August 1900 the Herring-Hall-Marvin Safe Company was reorganized and a few months later leased the four-story building at the northeast corner of Broadway and Walker Street.  Lilla B. Marvin retained ownership of the West Broadway building, which was quickly leased to multiple tenants.

Among the first were Toch Paint Supply Co., makers of "damp resisting paint," A. Hart & Company, "makers of Artistic Metal Novelties," and the Martin Brass Foundry.

Benajah M. Martin was owner of the foundry that bore his name.  He and his family lived at No. 240 West 74th Street.  His daughter Alice was frail, The New York Times describing her saying "from childhood she had been more or less an invalid," and she was constantly under a doctor's care.

Despite her condition, Alice had involved herself in mission work on Chrystie Street beginning around 1906.  But in November that year she was concerned about a condition that affected the muscles of her throat.  She convinced herself that she was suffering from tuberculosis.

On the night of November 20 the 20-year old wrote a note explaining that rather than be a burden to her family and suffer herself, she would end her life.  She then drank oxalic acid dissolved in water.  Around 7:00 her maid found her lying on her bed "suffering great agony."  Alice was dead before a doctor could arrive.  Her note ended "I give you all my love.  Good-bye to you."

Toch Paint remained in the building for several years.  They were joined by the Joseph alter Box Co. and in 1912 by M. Friedman & Co., manufacturers of canes and umbrellas, who took the fifth floor.


In 1920 the Incandescent Supply Company leased the entire building, paying $21,000 a year rent (just under $250,000 today).  But before long the firm purchased the property.

Incandescent Supply Company sold the building in 1928, while still leasing a portion for its use.  Soon No. 468 West Broadway would fill with paper box makers--Livingston & Co., the Plymouth Corrugated Paper Box Co., and the Belle Box Company.

The last quarter of the 20th century saw substantial change in the Soho neighborhood as factories gave way to art galleries, boutiques and cafes.  In 1977, while the upper floors continued to be manufacturing space, the ground floor was converted to Mama Sitka's restaurant, described by Howard Thompson in The New York Times on February 28, 1979 as "a buzzing, cavernous place, with the piano across the room beyond the bar."

A year after Mama Sitka's opened, the upper floors were converted to what the Department of Buildings described as "studios--art, music, dancing or theatrical, with accessory living."  A subsequent renovation in 1983 resulted in "class A" apartments. 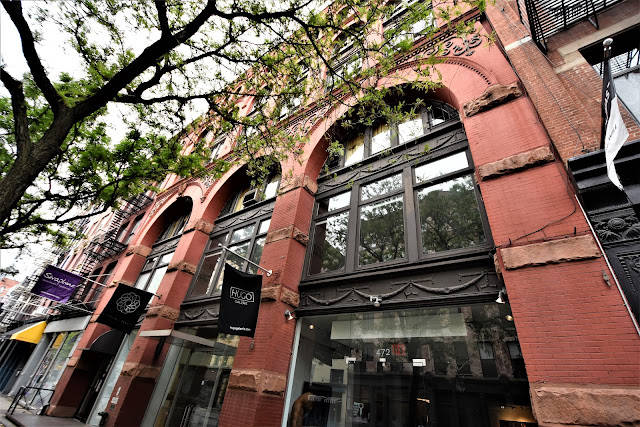 The ground floor saw a string of trendy tenants following Mama Sitka's.  The Circle Gallery opened by 1983 and would remain for more than a decade.  Sharing street level was Pour-Toi in 1989, a high-end boutique offering designer clothing by designers like Moschino, Gianni Versace and Karl Lagerfeld.  The first American store of Saba Australia opened here in August 1997, specializing in both men's and women's clothing; followed by Detour boutique in 2004 and Paul Smith around 2012, and currently Hugo Fine Arts Gallerie.

photographs by the author
many thanks to Lee Ping Kwan, AIA, for suggesting this post
Posted by Tom Miller at 3:18 AM