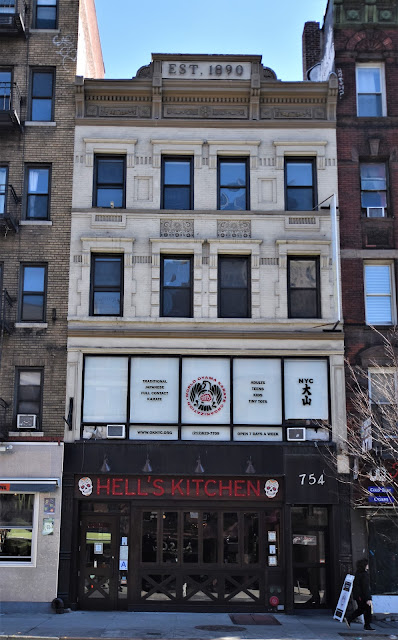 Charles Lehmann ran his butcher shop from at No. 754 Ninth Avenue, just south of the corner of West 51st Street in the early 1880s.  He and his wife Matilda lived in the little building behind the store, with the address 754-1/2.

In January 1886 the firm of Thom & Wilson had its hands full.  The architects were simultaneously working on 11 houses on Tenth Avenue at 76th Street, 13 houses on Ninth Avenue and 64th Street and five more on Park Avenue.  They were also at work on 10 apartment houses in Midtown, three "stores and flats" on Ninth Avenue, and nine tenement buildings.

Nevertheless Arthur M. Thom and James W. Wilson accepted another, much less ambitious, commission to design a small building in the gritty Hell's Kitchen neighborhood.  On April 23 Thom & Wilson filed plans for a replacement "four-story brick tenement with store" for Lehmann.  The 25-foot wide structure was projected to cost $16,000 to build--a little over $415,000 today.

Lehmann's building was completed in 1887.  The cast iron elements of the two-story commercial base appear to have been selected from foundry catalogues.  In stark contrast, the upper two floors were far from off-the-shelf.

Contrasting materials and colors--brick, stone and terra cotta--joined in a handsome neo-Grec facade splashed with hints of Queen Anne.  Thom & Wilson used brick for much of the decorative elements--the imitation quoins and blocks flanking the third floor openings, a sawtooth bandcourse, and recessed panels, for instance.  Between the third and fourth floors two panels filled with terra cotta tiles provided visual interest.  Their swirling designs, sunbursts or sunflowers were important Aesthetic Movement motifs.  The sheet metal cornice, with its panels of swags and rosettes, included a stylish parapet that may have originally announced the construction date, or perhaps Lehmann's name.


Charles Lehmann reopened his butcher shop in the ground floor.  The second floor was taken by Brode & Shannon, plumbers and gas fitters.

The upper two floors contained apartments, leased to low-income working class families.  Outside their windows was the Ninth Avenue Elevated Railroad.  Not only passenger cars, but rumbling freight trains traveled up and down the avenue.

Despite the desperate conditions of Hell's Kitchen residents, one family in No. 754 struggled to improve the future of one son.  Charles F. Osborne was enrolled in the College of the City of New York while living here.  His studies may have been slowed by having to work to help the family.  It took him six years to graduate in 1895.

In 1893 Charles Lehmann leased the butcher shop to L. Meyer.  It changed hands again when R. F. Hilsmann bought the business.  He transferred ownership to Emil A. Hilsmann, most likely his son, in 1897.

An upstairs tenant, Joseph Gunterman, learned a valuable lesson on June 13, 1898 when he visited the brothel at No. 210 West 13th Street.  The place was run by Georgie Daly, a 24-year old black woman.  Gunterman told police that Daly had entered the room where "he was in the bed" with an "unknown woman" that night at around 11:40.  He claimed that when he got dressed, he was missing $50.

Georgie Daly was arrested and held for trial on grand larceny charges.  The case was heard before a grand jury on June 27, 1898.  Gunterman's story of being robbed in a house of ill-repute, however, would not have garnered sympathy from the respectable jury.  Too, his assertion that he was carrying $50 in cash--nearly $1,500 in today's dollars--was suspect considering that he lived in one of Manhattan's seamiest neighborhoods.  The jury dismissed the case.

At the time Frederick Coppolo ran his sidewalk fruit stand in front of the butcher shop.  He turned over its operation to Andres Gargula the following year.  Gargula was granted his fruit stand license on September 5, 1899.

Charles and Matilda Lehmann struggled to keep their building.  On November 1, 1905 they refinanced the property with a mortgage of $12,000; not appreciably less than the original construction cost.

Little had changed to the neighborhood in the first years of the 20th century.  The renters in No. 754 continued to be hard working, blue collar types.   James R. Hayden lived here in 1906 when he was hired by the City as an "axeman" with the Board of Water Supply.  To quality for the stable position, which came with an annual salary of $840 (less than $23,000 today), Hayden had to pass a Civil Service exam.  As the City laid water pipes and sewers, heavy laboring axemen like Hayden would be on hand to clear the sites.

On September 11, 1915, the worst accident in the history of New York's elevated railways occurred two blocks north at the 53rd Street curve.  Thirteen people died and 48 others were seriously injured. The Lehmanns still owned No. 754 a year later when the Manhattan Railway Co. proposed adding a third track to the elevated railroad.   Like other property owners along Ninth Avenue, they received a small compensation after approving the additional track.

After having been the neighborhood butcher shop for decades, the ground floor was home to H. Cohen's furniture store by the outbreak of World War I.

The Keiser family rented an apartment here in the 1920s.  Harold Keiser was 17 years old in 1923 when he and three friends went to a party in the apartment house at No. 6 Amsterdam Avenue.  The problem was that none of them had been invited and they were refused entrance.

Undaunted, the boys decided to crash the party by entering through a window by way of the rear fire escape.  They went down the block until they found a way to get to the roof of the seven-story apartment building at No. 14.  But in order to get to No. 6 they had to leap from building to building.

Keiser did not get very far.  Between No. 14 and 12 he missed.  He would doubtlessly have died in the seven-story plunge had it not been for a bizarre reprieve.  As with most apartment buildings, housewives dried their laundry on criss-crossing clotheslines.  Pulleys made it possible for them to send the wet clothes into the high voids between the buildings.

The New York Times reported "Bouncing from clothesline to clotheslines Harold Keiser...escaped with a broken right ankle."  The newspaper explained that the clotheslines which stretched from window to window across the areaway acted to break his fall.

The Keiser family was among the last residents of No. 754 Ninth Avenue.  In 1930 architect Irving Kudroff renovated the commercial floors, including vast show windows at the second floor.  The upper two floors were converted for storage.


It would not be until the last quarter of the 20th century that Hell's Kitchen would see change from one of the most depressed and crime-ridden neighborhoods to a trendier residential district.  Charles Lehmann's butcher shop became the Network Theater by 1979, and the Amistad Theater in 1982.  By 1981 the Stanley Harrison Acting Studio was also in the building. 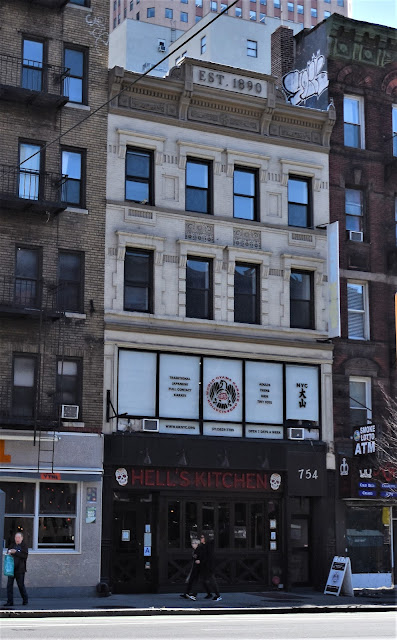 Today a Mexican restaurant operates from street level, with the appropriate name Hell's Kitchen.  The upper floors have been given a regrettable coat of gray-beige paint which sadly hides Thom & Wilson's contrasting colors and materials.