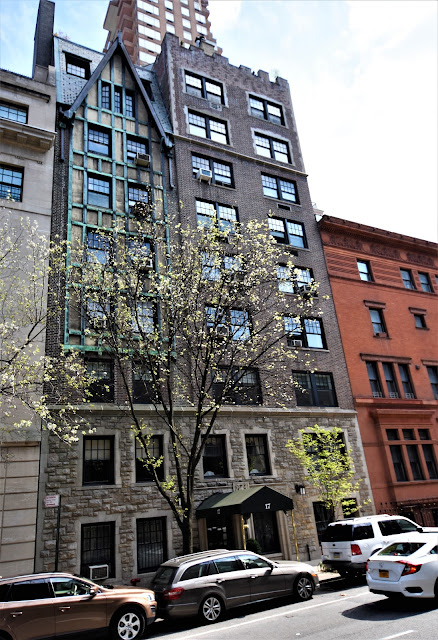 Pelham's designs for apartment buildings, rowhouses and hotels were impressive; but not especially out of the ordinary.  He routinely turned to the same historic styles being used by any number of New York architects--Renaissance Revival and Gothic Revival, for instance.

In 1922 the Sagamore Realty Co. commissioned Pelham to design a half-million dollar apartment house in Bronxville, New York.  His neo-Tudor fantasy was a striking blend of half-timbering, rubble stone and slate tiling.


Simultaneously, the architect was working on plans for a nine-story apartment building for the 2069 Broadway Corp, to be erected at Nos. 17 and 19 East 84th Street.  Designed in what the Record & Guide called "the style of Elizabethan period of English architecture," the upscale structure would share many of the charming details of its Bronxville cousin.

Completed in 1923, the $300,000 building (around $4.2 million today) was intended for the wealthy residents of the mansion-filled block.  There were just two apartments per floor, each containing five to seven rooms, along with a sprawling penthouse.

The two-story base was faced in rough-cut stone.  Here the slightly off-centered doorway was balanced by a matching, pointed-arched window.  Centered above was a carved coat of arms of two rampant lions flanking a crown-topped shield--the product of a designer's romantic imagination.

Above a projecting stone bandcourse the facade separated into two distinct but equally-charming sections.  To the west, stucco and copper-clad half-timbering created a Tudor cottage effect.  Behind the acute gable was a slate-tiled mansard.  The more severe section to the east was faced in ruddy Flemish bond brick.  Its top two floors, Elizabethan-fashion, were outlined in stone quoins.  A castellated parapet sat ready for pouring boiling oil on unwelcome invaders of East 84th Street.


No. 17 quickly became home to some of New York's most recognized names in society.  George Leary, Jr. had grown up in privilege.  The family mansion was at No. 1053 Fifth Avenue and young George was well-known among the yachting and tennis set on Long Island.  His parents' Southampton summer home, Hawthorne House, was completed in 1920.  Gossip, the "International Journal of Society," called it "a pretentious affair so far as spacious grounds and larges rooms on the inside of the house are concerned."

Following George's fashionable wedding to Sarah Thomson in St. Patrick's Cathedral (performed by Archibishop Patrick Hayes, later Cardinal Hayes), the couple moved into No. 17 East 84th Street.  They remained here for years.  Despite the spacious proportions of their apartments, the guest list for the dinner and dancing to celebrate their anniversary in 1925 required larger accommodations.

Dinner was served in a private suite of the Park Lane Hotel.  "The dance followed in the Tapestry Room," reported The New York Times, "the guests for it coming on from other dinners."  Those guests bore the surnames of some of Manhattan's most elite: Dodge, Remsen, Brokaw and Goodhue among them.

Several renowned publishers and physicians were early residents.  Perhaps the most famous doctor was Bela Schick, who married Catharine C. Frieds in 1925.  The couple would live at No. 17 for decades.

A pediatrician, Schick's name lives on in the Schick Test which essentially brought an end to diphtheria as a fatal disease to thousands of children annually.  But he was also known for his touching ability to relate to his young patients.  The New York Times noted later "Visitors to a sick child in the hospital were often astonished to see the distinguished-appearing Dr. Schick in a white medical jacket squatting on the floor, his hands sticking up from his head like ears, waggling his fingers."

Although he and Catharine never had children, he held firm opinions as to their rearing.  In his 1932 book Child Care Today, he offered guidance to parents like "Love the child--that is the most important implement of discipline," and "The attitude of parents toward sex education may be summed up in these words: No emphasis and no secrecy."

It was not all work for Schick.  He and Catharine routinely appeared at concerts and traveled frequently.

Among the prominent publishers in the building was Pascal Covici, of Covici, Friede, Inc.  In 1928 he was dismayed at the Government's censorship of D. H. Lawrence's Lady Chatterley's Lover.  Considered pornographic, it was banned in the United States.  But before the Custom House began confiscating the book, Covici had acquired a copy.

He wrote to the author, saying in part "Sincerely, I believe it to be the most vital piece of fiction I have read in the last ten years.  It would be a tragic loss to literature if your book would not be brought out in some way or other in America."

The phrase "in some way or other" was significant.  He offered to publish Lady Chatterly's Lover in the U.S. "if some of the phrases that seem to offend out Custom House officials were taken out."

The Great Depression had little effect on the upscale building.  In 1938 management reported that it was fully rented and had been for the four previous years.  Nevertheless, in November 1941 the building's owners, the Harlem Savings Bank, announced that architect J. M. Berlinger had been hired to remodel the penthouse "into two three-room apartments."

The Lockwood's daughter, Priscilla, had married Alfred F. Loomis in Grace Church on June 5, 1921.  Perhaps because of her mother's advancing age, the Loomis family moved into the building from their home at No. 122 East 76th Street in 1941.  Loomis, like George Leahy, Jr., was well-known in yachting circles.  He was the author of several books on sailing and his various vessels, docked near their country estate, The Orchard, in Huntington, Long Island, raced regularly in regattas.

Sarah Wisner Lockwood died in her apartment on October 24, 1944 at the age of 94.  Her son-in-law, Alfred, was serving as a commander in the U.S. Naval Reserves in the war at the time.

The Loomis family would remain in the building for years; their names appearing regularly in the society columns.  The children received the upbringing expected in wealthy families.  Sarah, known as Sally, debuted in the ballroom of the Cosmopolitan Club on November 2, 1946.  She attended the exclusive Chapin School, then Bryn Mawr College, and was, of course, a member of the Junior League.

Sarah's brother, Alfred Worthington Loomis, was married to Louise Harding Earle in St. John's Protestant Episcopal Church in Cold Spring Harbor, Long Island, in May 1950.  The same church was the setting of Sarah's wedding the following year, in April, to Ward Clarke Campbell.


On November 19, 1967 while Bela and Catharine Schick were on a cruise to South America, the doctor was stricken with pleurisy.  He was brought back to New York on November 30 and he died exactly one week later at the age of 90.  The distinguished couple had lived in what The Times called their "spacious apartment" for approximately four decades.

George Fred Pelham's quaint apartment house is little changed since it elbowed itself in among private mansions in 1923.  A modern awning obscures the details of the entrance; but overall its charming personality survives.