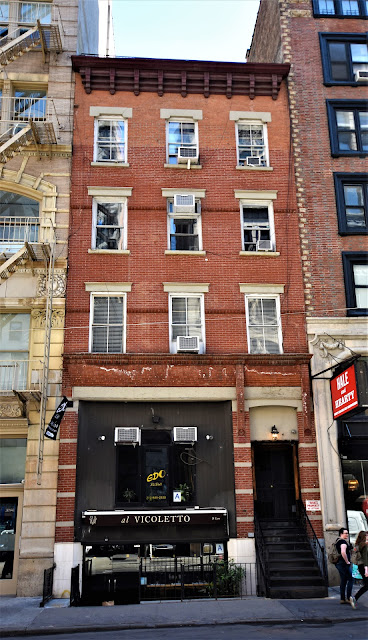 Brooks’ choice of location was a wise one and within a decade the neighborhood would be among the most exclusive in the city.  By 1861 the wealthy De Vassar family lived in the house.  Among their staff was the cook, 33-year old Jane Ferguson.  The young woman had immigrated to America from Ireland in hopes of a brighter future.

Tragedy struck on the morning of July 7, 1861 when Jane kindled a fire to prepare breakfast for the family.  The New York Times reported that “in order to have the fuel more readily ignite, she took a can of alcohol and poured some of it on.   The moment the liquid touched the fire the can exploded, set her clothing in flames, and burned her in the most frightful manner.”

Jane Ferguson died about an hour later.  The newspaper, which displayed a somewhat shocking coldness, ran the headline "Fatal Result of Stupidity" and reported that her body “was found to be burned to a crisp from head to foot.”

In the years after the end of the Civil War, the neighborhood changed as wealthy homeowners moved northward away from encroaching commerce.  In the late 1870s three dentists—A. Scofield, J. B. Littig and J. Morgan How—practiced from the basement level.   Boarders, in the meantime, still rented rooms in the upper floors.

Among them was Emma Bryant.  On the afternoon of November 18, 1880 she left the Bank of the Metropolis, just around the corner on Union Square.  She ran squarely into a notorious thief, Walter Crawford, who also went by the names “Jimmy Phelan,” “Diamond Jimmy,” and “Bat Eye.”   The New York Times reported that he “snatched a portemonnaie containing $103” from Emma’s hand.

Emma Bryant was understandably upset, for the crook whom The Times described as “a villainous-looking fellow” had made off with what would amount to about $2,000 today.

In 1883 owner Carlyle Coleman commissioned Van Campen Taylor to renovate the building for commercial purposes.  Taylor installed a shop front in the former English basement, gouged a large window into the parlor floor façade, and installed an interesting terra cotta cornice supported by brick corbel brackets over the commercial space.  Stylish terra cotta tiles in a pinwheel motif backed gas lamps on either side of the entrance.  Terra cotta egg-and-dart  bands connecting the windows of the second and third floors.  A new iron cornice completed the project.

The basement level was leased as retail space.  For several years the New York retail outlet of J. G. & J. F. Low of Chelsea, Massachusetts was here.  The Low company manufactured art tiles and other pottery, used in fireplace surrounds, architectural panels and even elaborate soda fountains.  One of the Low soda fountains was built for the 1893 Chicago World’s Fair at a cost of $10,000.

The Esthetic Movement style art tiles were produced by a patented “natural process” by which flowers, leaves and other items were pressed into the clay, leaving their natural impressions.

The building was enlarged 25 feet to the rear in 1890, adding to the commercial space and increasing rental income above.

Sommer Hall took over the parlor floor.  The space could be rented for receptions and similar social events, or for exhibitions or lectures.  In February 1891 The Woman’s Art Club held its second annual exhibition here for a full week.  The Club had been formed a year earlier “for the purpose of social intercourse among art lovers, for exhibition and to further art interests.”  The Woman’s Art Club was no watered-down social club for wealthy women who dabbled in china painting.  It drew eminent female artists and the exhibitions were seriously viewed.

Reflecting the changes in lower Fifth Avenue and society in general, the Metropolitan School of Shorthand and Typewriting opened upstairs at No. 95 Fifth Avenue in 1892.  As the turn of the century neared, secretarial positions were being taken by women, a situation unthinkable only a generation earlier.  A year later the first graduation was held in Sommer Hall.

Of the 70 students, 12 stenography students received diplomas after a “musical programme.”  Of those dozen graduates, seven were female, three of whom were married—a socially-shocking set of circumstances to many Victorian minds.

Through the Great Depression the building continued its dual-purpose of rooming house above and commercial space below.  In 1936 Valentina Litvinoff roomed here.  Her fiancé was Edward S. Abbott, a 22-year old former Yale student who lived a few blocks away at No. 48 West 17th Street.

Abbott aspired to be a playwright and had studied under the famous Professor George Pierce Baker at Yale and had played in Summer Stock with the Yale Players.  He dropped out of college when he was “no longer interested in study,” according to his father, and found employment with the Federal Theatre Project as a drama coach in 1935.

He was playing the part of a juvenile in the WPA play Jiggins of Jigginstown at the Labor State Theatre at No. 106 West 39th Street and making $23.86 a week.  But the troubled young man, whom his father described as “highly emotional and inclined to melancholy moods,” began to worry that he would be fired.

Four days before Christmas in 1936 he visited his fianceé at No. 9 East 17th Street.  He left her room around midnight.   Later another roomer, Maude Conant, entered the common bathroom to find Abbott “dangling from a pipe beneath the ceiling of the bathroom.  He had fashioned a noose from a clothesline hanging there,” reported The Times.

Abbott had left three messages in the bathroom.  One directed his fiancée to dispose of his personal effects “at her discretion," a second explained his motives, and a postscript apologized to the landlady for using her premises “for this business.” 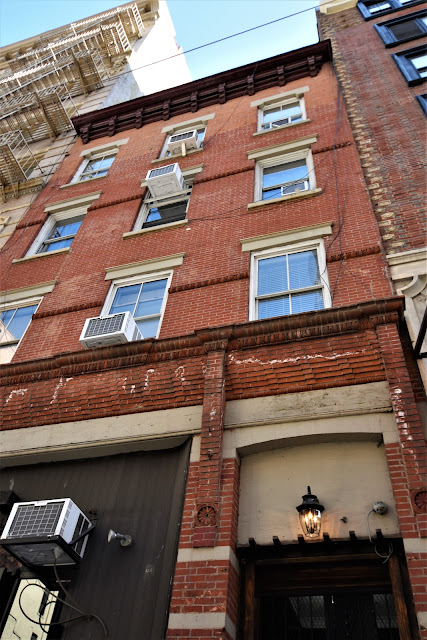 The exclusive residential block of the 1840s and 1850s was, a century later, lined with tall industrial buildings--except for the four-story brick house erected by Daniel Brooks.  Although a bit abused, it appears much as it did when Van Campen Taylor renovated it in 1883.  And the building continues to be used as he intended nearly 135 years ago—two floors of commercial space with rental units above.

photographs taken by the author
Posted by Tom Miller at 3:25 AM