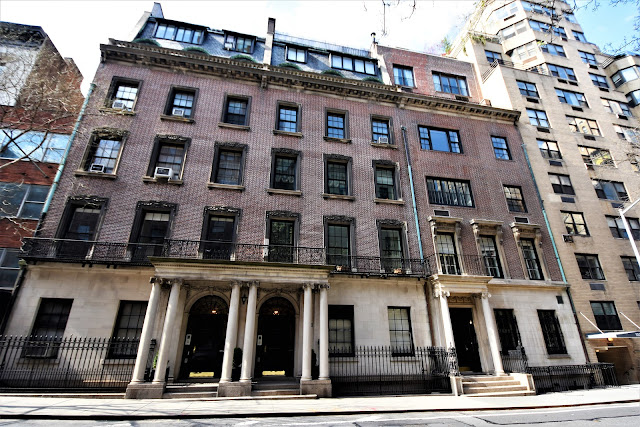 When Daniel Leroy and is wife, the former Susan Elizabeth Fish moved permanently from their elegant home at 20 St. Marks Place to Newport, their daughter Mary Augusta was still in her teens.  In 1849, when she was 20 years old, she married another Newport resident, Edward King.

King had already made a fortune in the China Trade, dealing in tea and silk, and had extensive real estate holdings both in Newport and New York City.  The King mansion, design by Richard Upjohn in 1845 and completed in 1847, was the largest and most impressive house in Newport at the time.

When Edward died in September 1875, The New York Times remarked "His wealth is estimated at $5,000,000."  The massive estate would equal about $111 million today.  The article added "a wife and eight children survive him."

Before the century was out, Mary Augusta King would repeatedly attend the funerals of her children.  Both Edward and Elizabeth died in 1878, Alexander in 1885, and Leroy in December 1895.

In 1897 Mary Augusta purchased plots at Nos. 16, 18 and 20 East 84th Street, between Fifth and Madison Avenues, from Frederick A. Constable.  The following year she transferred the titles to her two children--George and Edith (who had married Louis Butler McCagg in 1892), and to Leroy's widow, Ethel Rhinelander King.

Completed in 1900, the three harmonious homes melded neo-Georgian and neo-Federal elements--harbingers of the domestic architectural trend soon to come in New York.  Somewhat surprisingly, Nos. 18 and 20 were designed as balanced, mirror image mansions; while George's house seemed the uncomfortable tag-along.

Above the planar limestone bases, all three houses were clad in Flemish bond red brick.  They shared matching stone cornices and similar Ionic Scamozzi porticoes.  A common balustrade ran along the roofline, behind which were copper-clad dormers.  But there the uniformity ended.

Nos. 18 and 20 shared a handsome neo-Federal balcony that stretched the width of both houses.  The architrave surrounds of the second and third floor openings were carved with neo-Georgian motifs of swags and classical urns.   The windows of No. 16 were noticeably different, with bold brackets upholding prominent cornices.  Too, unlike the arched doorways of its neighbors, entrance of No. 16 was rectangular, and the carved swags above it much less elaborate.  Even the areaway ironwork of George King's house had nothing in common with Nos. 18 and 20.

The fortunes of all three families were substantially increased following Mary Augusta's death in May 1905.  After generous bequests were made to various institutions, like the Cathedral of St. John the Divine, her estate was divided equally among George, Ethel and Edith.

Interestingly, six years after the families moved in, on June 30, 1906, the Record and Guide reported that architects Robertson & Potter had drawn plans "for extensive alterations to the two 6-sty dwellings 18-20 East 84th st. for Louis B. McCagg, 18 West 84th st, and Mrs. Le Roy King."  What the extensive alterations are is unclear, but obviously George King did not join in the project.

The families lived harmoniously side-by-side for decades, each entertaining in grand style.   As with all wealthy families, the introductions of their daughters involved glittering events.  On April 16, 1911, The New York Times announced that Mrs. George Gordon King would be giving a dance in the house for "the Misses King."  In December 1913 the first of the receptions for Augusta McCagg were held next door at No. 18; and on in November 1914 Annie King gave a tea dance in No. 16 to introduce Violet.

Ethel's family saw a flurry of weddings and receptions beginning on December 4, 1920.  A reception was held in the house following the wedding of Ethel's niece, Frederica Rhinelander, to Harold Morton Landon in the Cathedral of St. John the Divine.  Five months later Ethel's son, Le Roy, was married to Mary Isabel Lockwood in a fashionable St. George's Church ceremony.  The New-York Tribune called the wedding "brilliant" and noted "It was attended by prominent members of New York society and the Newport set."  Then, on December 12 that same year, Helen Cameron married Reginald Bishop Lanier in the Cathedral of St. John the Divine.  The reception was held in the 84th Street mansion.

In the meantime, all three families carried on their social routines; summering in Newport or traveling to Europe.  On October 14, 1921, for instance, the New-York Tribune announced "Mrs. George Gordon King and her daughters, Miss Dorothy Gordon King and Miss Violet Gordon King, who were abroad throughout the summer and early fall, have returned and are at their home, 16 East Eighty-fourth Street."

Not long after the women returned home, George Gordon King fell ill.  He died in the 84th Street mansion on March 30, 1922 at the age of 64.  His multi-million dollar estate, like his mother's, included large bequests to religious institutions.  Annie received all of the real estate and $10,000 in cash.  The children, Violet, Edward and Dorothy (all of whom still lived at No. 16) received $25,000 each--about a third of a million in today's dollars.

The King family's ownership of the three houses was soon to come to an end.  On May 12, 1925 Ethel died in No. 20.  Although the family had built the Chapel of St. Columba in the Cathedral of St. John the Divine, her funeral service was held in the Chapel of St. Ansgarius because it was larger and could accommodate the many mourners.

Louis Butler McCagg had been retired from his legal practice almost since moving into No. 18 East 84th Street.  He and Edith focused their attention instead on philanthropies and social life.   The couple was at their Newport villa, Morning Side, on September 20, 1929 when son Edward arrived from New York to spend the weekend.

Louis was not at home.  He had gone out on his customary walk after breakfast.  When he had not returned by noon, family members went out to look for him.  Edward was joined by the family physician, Dr. Charles D. Easton.  The two men found McCagg's body on the shore at the foot of the cliffs.

A special report to The New York Times said "The belief is that Mr. McCagg, who was subject to dizziness, was walking along the rocks and fell, striking his head, and toppled into the water.  The tide was high at the time."  McCagg died from accidental drowning.

The George Gordon King mansion had become home to Alfred Barmore Maclay, his wife the former Louise Fleischmann, and their daughter Georgiana, by the late 1930s.  Mcclay's collection of Early American glass was well known; but it was his passion for thoroughbred horses for which he was famous.  The president of the American Horse Show Association, his summer estate Killearn Farm on Long Island, was often the scene of horse shows.

Following Ethel King's death No. 20 was leased before becoming home to the Charles Howland Russell, Jr. family in the mid-1930s.  As it had been during Ethel's life, it continued to be the scene of society events.  On October 17, 1939, for instance, The New York Times reported "Mrs. Charles Howland Russell, Jr. gave a tea yesterday at her home, 20 East Eighty-fourth Street, for several young women of society."

Three years later, with World War II raging in Europe, she hosted a meeting of the Women's Council of the Navy League.  More than 100 women were present in the mansion that afternoon.

The first of the mansions to be converted to apartments was No. 16.  Alfred Maclay died on May 27, 1944 and his estate sold the house in May the following year.  The New York Times said "There are twenty-two rooms and five baths at present in the house, which contains an electric elevator."  The new owners announced plans for altering the mansion "into a twelve-family building with suites of one and two rooms."

In 1948 No. 18 was converted to two apartments per floor; and the following year No. 20 followed suit with two apartments on each level.  While the lower four floors of Nos. 18 and 20 remained little changed; gruesome picture windows upset the balance and integrity of the George Gordon King house.  In all three cases the penthouse additions are architecturally barbaric.

photographs by the author
Posted by Tom Miller at 11:57 PM