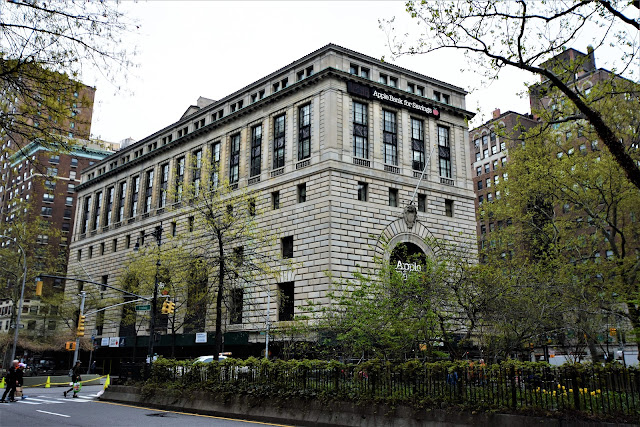 The 1840s saw the first great wave of German immigrants into New York Harbor.  By 1855 the city had the third largest population of German-speaking residents in the world.   Not all of the new-comers fit the impoverished, tenement dwelling stereotype that the word "immigrant" sparks today.

One successful businessman, Jacob Windmuller, was determined to found a banking institution for his former countrymen.  Putting together a group of investors from the German Society, he formed the German Savings Bank in the City of New York, which opened for business on July 1, 1859.

Just five years later the successful bank purchased land at 14th Street and Fourth Avenue (later Park Avenue South).  An imposing French Second Empire headquarters building was constructed that would be the bank's home for more than half a century.

During World War I, with anti-German sentiments an issue, the bank changed its name.  On June 4, 1918 The New York Times reported “The German Savings Bank of 100 East Fourteenth Street announced yesterday that it had been decided to change the name of the institution to ‘The Central Savings Bank in the City of New York.”  At the time the highly-successful bank had assets of over $102 million.

Following the war a branch office was opened on Broadway at 77th Street.  Then, in 1926, the directors made the dramatic decision to move its headquarters near to the Upper West Side location.  On May 1, 1927 The New York Times reported "The Central Savings Bank has begun construction of offices which will occupy the entire block between Broadway and Amsterdam Avenue, Seventy-third to Seventy-fourth Street."

The oddly-shaped plot was essentially a trapezoidal island formed by Broadway's diagonal slash through the otherwise regimented north-and-south layout of streets and avenues.   Architects York & Sawyer, well known for their impressive bank building designs. was given the commission.

Two major depressions--the Panic of 1901 and the Panic of 1907--had left depositors wary of financial institutions.  In response, bank buildings were designed to reflect solidity and security.  York & Sawyer's design fell right in line.

Both Philip Sawyer and Edward Palmer York had formerly worked for McKim, Mead and White, well-known for turning to historic styles.  For the Central Savings Bank they closely followed the model of an Italian Renaissance palazzo.  The massive limestone blocks provided the impenetrable impression necessary in a banking institution; while the grand arched openings at the lower levels, and the more delicate two-story openings at the upper floors provided a sense of elegance.


The exceptional architecture and quality of the structure was recognized even before its completion.  On March 6, 1928 fifteen workers were presented with certificates and gold buttons by the New York Building Congress.  The men receiving the honors included craftsmen like stone carver Patrick Clune and ornamental iron and bronze worker George Forspad; and regular blue collar laborers like electrician Charles Kennedy and cement mason Anthony Kowalseki.

Nine months later The New York Times reported on the completed structure, calling it "one of the finest architectural structures" on Broadway.   The Broadway Association agreed, and attached a bronze tablet next to the Broadway entrance as recognition of its "contribution to the civic advancement of Broadway."


While the structure contained six floors, the soaring height of the main banking level gave it the equivalent elevation of a nine-story building.  Like some other Manhattan banks of the period, the banking room was majestic and awe-inspiring.  The cathedral-like proportions, polychromatic marble floor, massive chandeliers, and honey-combed barrel-vaulted ceiling were as once dramatic and visually impactful.


Before the new structure could be opened for business, the assets had to be moved from downtown.  On December 9, 1928 a well-planned and seriously-guarded motorcade left 14th Street.  Sixteen trucks with four men made 38 trips carrying more than $170,000,000 in bonds, mortgages and stocks.

The route and the schedule had been carefully guarded.  The trucks, loaded with $5 million per trip, were timed two minutes apart.  Guards armed with machine guns were at both locations.   Although the trucks could carry more, bank officials limited the amount per trip so the unloading would be quick.  As the heavy satchels were carried across the sidewalk, "a man crouched with his machine gun ready for action," according to The Times.

The transfer--the largest amount of private funds ever carried through New York streets--went off without a hitch.  The funds were deposited in the vaults under the bank, the doors of which weighed 60 tons each.


The Depression and Prohibition years made vice squad officer Andrew G. McLaughlin somewhat notorious within the New York Police Department.   Since joining the squad in 1920 he had made between 1,000 and 1,200 arrests.  He apparently enjoyed his work, saying that he often "spent his meal-time and off-duty hours walking up and down Broadway and arresting women."

In 1923 his reputation and career were threatened after he arrested Vivian Gordon on an immorality charge.  She insisted she was innocent and had been "railroaded" by McLaughlin.  When an Appellate Division investigation into vice squad corruption was launched in February 1931, she eagerly volunteered to testify.  Her body was found in Van Cortlandt Park a few days before her testimony.  She had been strangled.


The suspicious circumstances led investigators to the Central Savings Bank where Officer McLaughlin had his account.  The vice cop earned $3,000 a year; prompting raised eyebrows when the bank records showed that he had deposited $35,800.51 between November 18, 1828 and December 31, 1930.    The rapid-fire deposits, often just days apart, averaged around $300 each.

At his inquiry on March 13, he refused to answer questions.  His obstinance resulted in his being dismissed from the force.  In a remarkable twist to the story, he was found dead in the basement of his Forest Hills home twenty years later, on June 6, 1950, with a bullet wound in his head.

The year after McLaughlin's inquiry, on June 20, 1932, a 92-year old woman was found wandering and confused in the Times Square subway station.  A passerby recognized she needed help and notified Patrolman Walter Headwell.  She was taken to Bellevue Hospital, noted for its insanity ward.

Although she would most likely be diagnosed with dementia today, The New York Times reported "It was found there that she was suffering from amnesia and was unable to talk, but after she had rested for a time she spoke a few words of German."

A staff member who spoke German learned her name, Magdalena Kline, and that she lived with her sister on West 43rd Street.  She could not explain how she happened to be wandering around in the subway.  The newspaper said that because she "seemed so helpless and confused," that it was assumed she was destitute as well.  She was not.

Magdalena Kline banked at the Central Savings Bank and several other institutions.  The bank books in her purse showed a total of $23,625 in savings--about $410,000 in today's dollars.

Another surprising bank account was discovered during the trial of notorious gangster Frank Costello in 1954.  The racketeer was charged with defrauding the Government of around $74,000 in income taxes; necessitating the examination of his accounts.  Between 1947 and 1949 Costello had deposited $30,350 into the "Frank Costello Charities Fund" account.  The New York Times termed the unforeseen disclosure a "Robin Hood aspect of Frank Costello's operations."

While the structure's architecture may look impenetrable, it was anything but that in 1976.  On September 2 a gun-toting robber took $4,537 from the Central Savings Bank branch on Sixth Avenue and 53rd Street; then several hours later another hit the Broadway and 73rd Street location, fleeing with about $1,100.

A little over a month later, on August 16 a note passing gunman took $1,030 from the Chemical Bank at Broadway and 63rd Street, then headed to the Central Savings Bank, where he made off with $2,532. 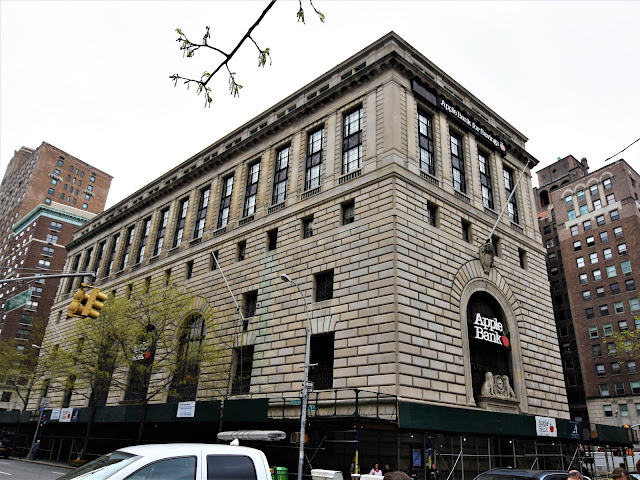 In 1981 the Central Savings Bank was absorbed by the Apple Bank for Savings.  York & Sawyers' handsome Renaissance palace for banking, commanding attention from its dramatically-unique island, is now protected both inside and out by landmark designation.


photographs by the author
Posted by Tom Miller at 3:37 AM